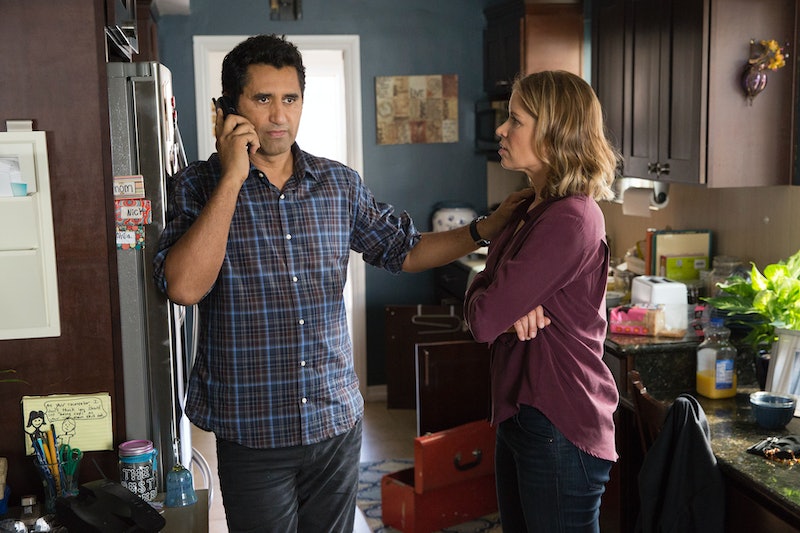 What exactly went down while Rick Grimes was in that coma? That's the question that The Walking Dead spinoff, Fear The Walking Dead, aims to answer, providing fans of AMC's hit zombie drama with a glimpse at how the apocalypse actually began through the lens of an everyday family in Los Angeles. We already got a look at the first three minutes of the series in advance of this Sunday's premiere, which showed us Nick Clark's (Frank Dillane, Harry Potter And The Half-Blood Prince) first encounter with a freshly-turned walker. But where did things go from there? How quickly did things fall apart in the first episode? How did the zombie apocalypse start?

Not with a bang, as it turns out, but rather with a bit of a whimper. Given that Fear chronicles the first days of the outbreak, I don't think anyone expected for the pilot to be wall-to-wall action. But after our first brush with face-eating zombies in the opening scene, viewers didn't see another walker in person until... well, until the closing scene of the super-sized 90-minute episode. The remaining hour-plus of screen time was devoted primarily to introducing audiences to our protagonists — including Nick's single mom Madison (Kim Dickens, Gone Girl), his sister Alicia (Alycia Debnam-Carey, The 100), and his mom's boyfriend Travis (Cliff Curtis, Gang Related) — and setting up the fictional world that we're about to watch disintegrate into chaos over the next five weeks.

So family drama aside, how did the apocalypse unfold in its early days, exactly? After Nick saw his friend Gloria's hungrier side, he became concerned that what he'd witnessed was merely a hallucination caused by the heroin he'd taken, perhaps laced with PCP. To that end, he tracked down his dealer, Calvin. Meanwhile, Madison and Travis were trying to verify the veracity of Nick's claims by going to the church where he had his encounter. Although they did find copious amounts of blood, Gloria was nowhere to be found and the blood could just as plausibly indicate a brutal stabbing as a zombie attack.

But there were signs that all was not well even outside of the walls of that dilapidated drug den. When footage leaked of LAPD officers being attacked by a man who seemingly couldn't be killed, the teachers and students were in such a state of confusion that the principal decided to let out school early. Oh, and Alicia's doting boyfriend went missing. Certainly not a normal day in Los Angeles, but not quite apocalypse levels of panic... yet.

But back to Nick: when he met up with Calvin (in a diner that looked like it was straight out of Pulp Fiction), the dealer became nervous when he learned that his buyer had spoken to the police. Nick insisted that he was too busy telling them about the girl who was eating a dude's face to tell them anything about his dealer — but Calvin was already suspiciously spooked. He drove Nick out to a deserted culvert (that looked like it was straight out of the racing scene in Grease), where he planned on executing his nervous buyer. Somehow, Nick got the drop on Calvin, and the dealer ended up dead... or did he? Dun, dun, DUN!!

When Nick brought Madison and Travis to the culvert in a panic, Calvin's body was (predictably) missing. They encountered the young man's reanimated corpse in a creepy alley, where the walker almost bit Madison before Nick ran it over in Travis's pickup truck. When that still didn't do the trick, Nick rammed it again, sending it flying back out into the culvert. When that still didn't do the trick, Madison asked in disbelief, "What is happening?" And so it begins.

We weren't given any actual information about the origins of the virus itself yet, like how exactly Gloria was infected, how it's spreading, or anything else that would point to the more scientific answers. Hopefully, that will be explored as the first season of Fear The Walking Dead continues, but since the original series hasn't even gotten there yet, you shouldn't hold your breath.

More like this
Michael & Kathleen Peterson’s House From ‘The Staircase’ Has New Owners
By Kadin Burnett and Kayla Blanton
The Time Traveler’s Wife Book Has A Heartbreaking Ending
By K.W. Colyard
Selena Gomez’s ‘SNL’ Hosting Debut Had Twitter Gushing Over ‘Barney’ & Wigs
By Stephanie Topacio Long
‘SNL’ Referenced Jesse Williams’ Broadway Leak In A Chaotic Theater Sketch
By Grace Wehniainen
Get Even More From Bustle — Sign Up For The Newsletter