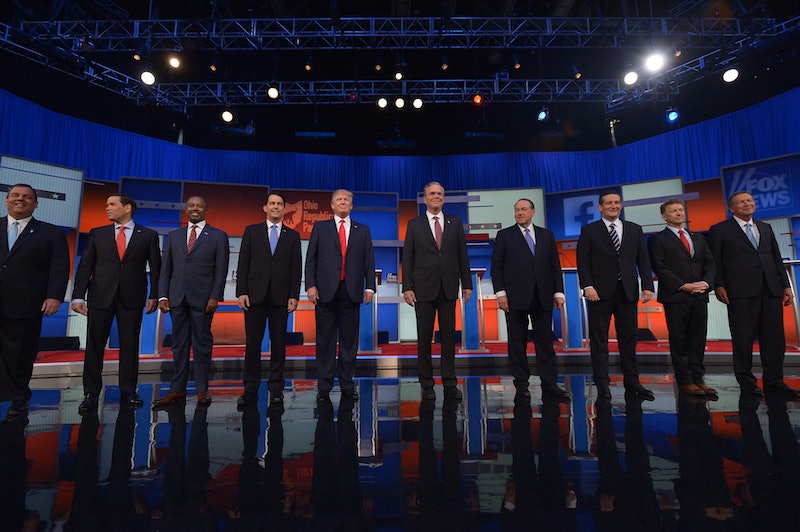 Like it or not, presidential politics has a lot to do with money. It typically costs millions of dollars to fund a political campaign, and if you get the job, you're tasked with handling the nation's trillions of dollars in economic activity. For those reasons, it makes sense that most, if not all, candidates want to portray themselves as good at managing money. To appeal to the everyday American voter, many candidates also want to play down the implication — accurate or not — that they are wealthy and, therefore, out of touch with the struggles of the middle class. That can't be said for Donald Trump, though. As it turns out, the way that the presidential candidates talk about money highlights a difference between Trump and his opponents from both tickets.

Until his campaign announcement back in June, no one really knew exactly how much money Trump had. He used that opportunity to tell the world that he is "really rich," vowing not to fall prey to the lobbyists and donors that support other candidates. (During the first primetime debate, Trump even admitted that he has donated to politicians to get what he wants, basically implying that he doesn't need anyone else's money and that the system of American politics is corrupt with politicians who accept money in exchange for favors.) A month after his campaign announcement, he noted that his "net worth is in excess of TEN BILLION DOLLARS." Meanwhile, his competitors seem to be holding true to the "help me, I'm poor" mantra.

A lot of attention has been paid to Rubio's finances throughout the campaign, largely in part because The New York Times tried to make him out to appear unfit to handle money. The Times cited Rubio's personal money problems and wasteful spending, including the purchase of a "luxury speedboat." However, as Rubio, Jon Stewart, and several others pointed out, the Times' point was a tad ridiculous, and it might have actually helped Rubio appeal to the middle class.

We are moving toward an oligarchic form of society, where the billionaires will control the economy and the political life of this country.

*Cough, cough* Trump. Sanders has had little trouble appealing to the middle class — and quotes like this explain why. It's more just a matter of whether or not he can catch Hillary Clinton's lead.

I've been out of money for a lot of times in my life, whether it's in my personal life or it's in my business life.

Perry might have new glasses this time around, but he doesn't necessarily have the money. Reports say that he's not paying his campaign staff and that his campaign office is headed for broke, but he's trying to turn things around by appealing to the Ramen-eating, unpaid intern in all of us.

Years ago, as newlyweds, I made a critical mistake. I went to a Kohl's department store and I bought something for the price it was marked at.

Like Rubio, Walker's debt has also been noted in the media. This anecdote about him learning to shop at Kohl's seems like an attempt to remind us of those humble finances. FYI, later in the story, he said that he went back to Kohl's and bought a sweater for a dollar after using Kohl's Cash.

We came out of the White House not only dead broke, but in debt. We had no money when we got there, and we struggled to, you know, piece together the resources for mortgages, for houses, for Chelsea's education.

Clinton made this statement in an interview with ABC News' Diane Sawyer back in June 2014 in an attempt to justify her high speaking fees. As a candidate, it's one of the things that has haunted her campaign, and she ultimately said she regretted saying it at all. No one can believe that the Clintons are broke any more than they would believe that the Trumps are broke, which leads to my final point...

In reality, Trump probably didn't have a choice but to be up front about his wealth and use that to his advantage. It's hard to believe that anyone would take his word for it if he played the broke card. Still, though, I think we get it by now. New drinking game: Take a shot every time Trump talks about how rich he is.

More like this
What Is Barack Obama’s Net Worth? He Makes *Way* More Now As An Ex-President
By Hugh McIntyre
Michigan’s Governor Is “Going To Fight Like Hell” To Protect Abortion Access
By Andrea Zelinski
How To Fight For Reproductive Rights, Based On How Much Time You Have
By Courtney Young
5 Crystals To Manifest More Money
By Megan McCarty
Get Even More From Bustle — Sign Up For The Newsletter