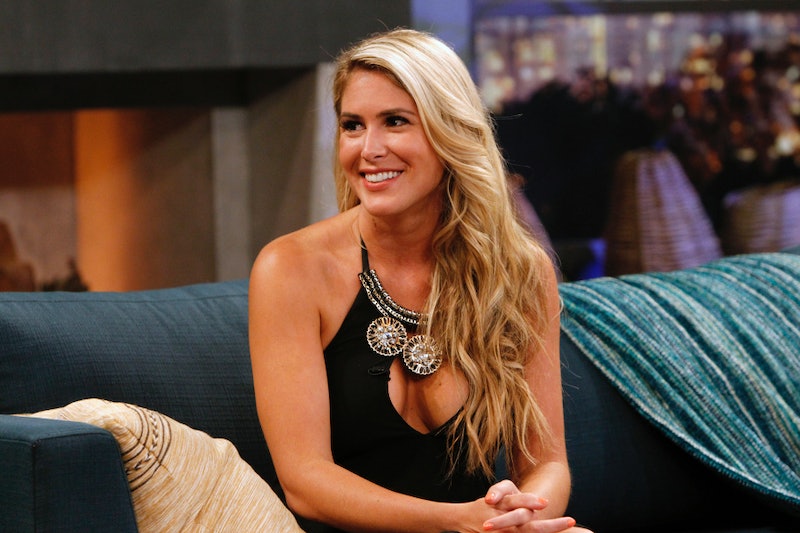 It's one thing to have a common name. But for Juelia Kinney on this season of Bachelor in Paradise , she has a name that everyone pretty much knows — but may not know how to spell. So, why does Juelia spell her name that way: J-U-E-L-I-A? Bustle reached out to Juelia for the answer, and she happily shed some insight on the unique spelling. "I was actually named after my grandfather," she reveals. "His name was Juel, which means Christmas in Norwegian. When my parents decided to name me Julia, they thought it would be special and unique to spell it like my grandfather."

Aww! So, now every time you see it on her Bachelor in Paradise chyron, you won't think it's some kind of strange misspelling; it's actually a sweet tribute to her grandfather. According to Behind The Name, there are many variations on the spelling of regular ol' Julia, so she's certainly not the first to have her parents step out of the box. Giulia (Italian), Yuliya (Bulgarian), and Yulia (Russian), are other iterations of the moniker. But, before you consider going with a unique spelling of a common name, remember sometimes it's hard to stand out. For Juelia, she says she appreciates that her name is different that other Julias, but the spelling has created some challenges to deal with. "So many people give me such a hard time," she admits. "I used to hate it, but now I love how unique it is — even though spelling it out for people still gives me a headache sometimes!"

And those challenges are what Juelia said she took into consideration when it came time to decide on a name for her daughter with her late husband Dustin. They named their cute little girl Ireland, which is spelled just like the country. "I wanted to name my daughter something unique and actually thought about spelling her name differently," Juelia reveals. "But decided against it so that she would never have the problem I have."

Now that mystery of Juelia's spelling is solved, it's time to get back to watching her find love on Bachelor in Paradise. Hopefully Mikey is better suited for her in the end!