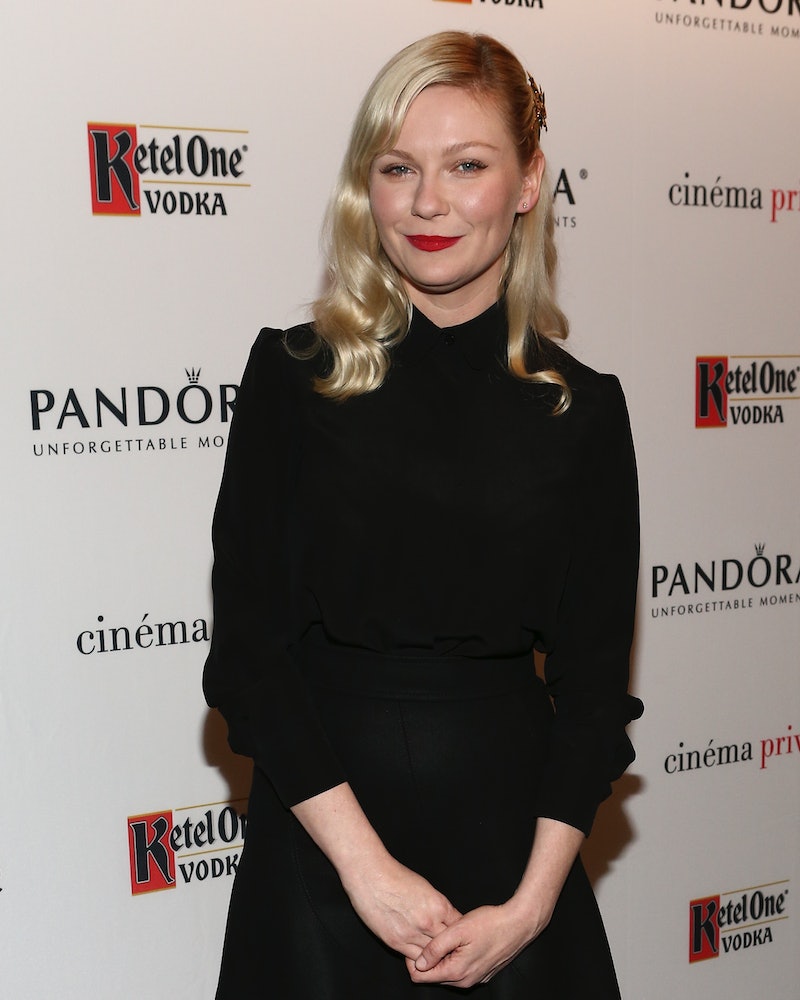 Some people seem to never age. Celebrities in particular seem to have an ageless quality about them. Kirsten Dunst's Gotham cover is a perfect example of how the actress somehow remains completely timeless. Dunst, who is 33, was quite the "it" girl over a decade ago, dating Jake Gyllenhaal, appearing in comic book blockbusters like Spider-Man, period pieces like Marie Antoinette, and indie/arty fare like Eternal Sunshine of the Spotless Mind. The aughts belonged to Kirsten Dunst.

Sure, she is decidedly less high-profile in 2015. But she is cherry-picking her roles and making smart career choices.

Dunst talked to fellow actress Julianne Moore about her life and career in her Gotham feature, and it seems the

Even though her breakthrough film Bring It On turned 15 years old recently, Dunst could still pass for the 18-year-old she was when the movie came out. Maybe it's her smooth skin? Maybe it's her youthful waves? Come on, Dunst. Just admit you're immortal.

Dunst covers the September 2015 issue of the Gotham, looking over her shoulder suggestively, with her thick and flaxen hair fixed in undulating waves. She is bare-lipped... and beautiful as ever.

I don't know about you, fellow early '00s lovers, but I am sensing that a K. Dunst renaissance is about to happen. I'm just waiting for an unexpected fashion house to recruit her for its next ad campaign.

To celebrate her fabulous cover, here are nine other times that Kirsten Dunst has looked super fresh in recent years.

Even with dark color on her thin lips, the bright blonde, one-shoulder waves exuded youth in 2014.

That skin! So peaches 'n' cream. This 2014 shot of Dunst showed off her fair skin.

One-shoulder waves are her sig and she wears them well.

Bangs and a big grin? Those are always fresh and youthful!

Beachy waves, red lips, and polkadots were so, so sweet on her in 2013.

How adorbs was her headband and side bang? This was another 2013 look from Dunst.

She was ageless and timeless in this black dress, also a 2013 look for her.

Flushed and lovely in the one-three. I love how her lashes opened up her eyes.

The bobby pin and the glossy, berry-stained lips were well-matched in 2012.

Kirsten Dunst was the "it" girl of the early and mid-aughts, but she remains insanely lovely, classic, and ageless. I could look at pics of her all day long.