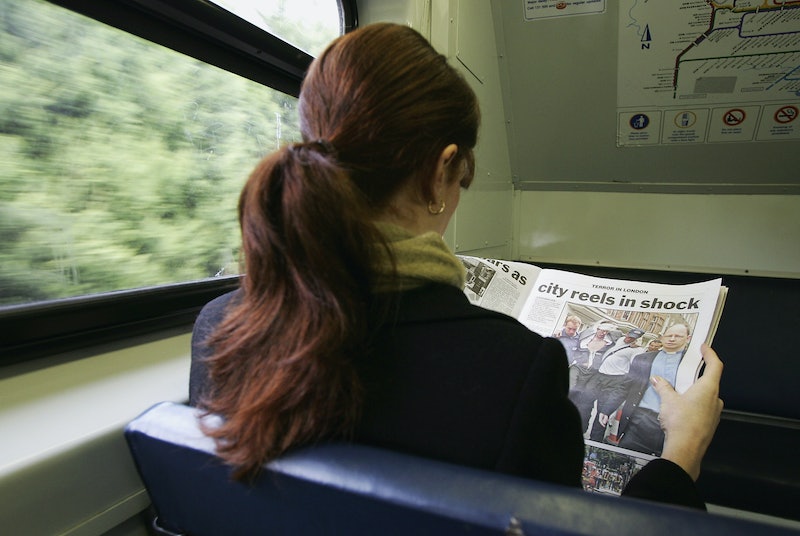 For a lot of Americans, long commutes make up an extended and unavoidable part of the workday. According to the U.S. Census Bureau, the average commute in the U.S. lasts just over 25 minutes each way, with 8 percent of workers commuting for more than an hour both to and from work. Although all commuters deal with stress during their daily treks, female commuters face particular challenges traveling to their jobs, whether they travel by car, public transportation, or their own two feet. In fact, a 2009 study out of the U.K. found that commuting has a significantly more detrimental psychological effect on women than on men. Researchers found that, even though women on average work less and spend less time commuting than men, commuting has an adverse effect on women’s psychological well-being, without having the same affect on men. The researchers theorized that this effect has to do with the fact that women typically carry larger household and childcare responsibilities than men; Essentially, when one is taking care of the house and managing the kids and working, a lengthy commute becomes a major burden.

In addition to juggling their commutes with other time consuming responsibilities, women have to deal with certain issues on their way to work that most men simply don’t have to worry about, including harassment (both verbal and physical) from strangers. Sadly, the general lesson here is that women have to deal with a lot of crap when they’re in public, a fact that will surprise no one who has ever spent much time using public transportation or walking on city streets. If you’re a lady commuter, you may recognize some of these challenges:

“Man spreading” describes the irritating phenomenon of someone on the train or subway sitting in a seat and spreading his or her legs wide, effectively occupying two of even three seats in total. Often man spreading will involve the person next to the offender being forced to squish into an uncomfortably small space, so as avoid having to get cozy with a stranger’s thigh. As the label implies, man spreaders tend to be men, and the people being squished to the side are often women, though women can certainly man spread, and men can certainly be squished. The behavior is rude, not only because it leaves people without seats on crowded trains, but because it seems to imply that these dudes somehow have a right to take up more space than the women around them — even when it means that women have to be uncomfortable, both physically and mentally.

A lot of people hesitate to confront man spreaders about their rude behavior, for fear of confrontation or even their safety. As Lucia Peters has written for Bustle,

[Y]ou know what? It sucks that anyone should feel that they have to choose between staying safe and not being squashed into a corner by someone who can’t be bothered to exercise a little consideration and keep their legs in line with, say, the width of their shoulders.

Man spreading is such a problem that New York’s MTA targeted the behavior last December in a campaign to promote common courtesy on city transportation. Let’s hope it works!

2. People assuming you don’t know how to drive because you have lady parts.

You may not have to cope with man spreading when you drive to work, but you do have to deal with other drivers assuming that your gender makes you a terrible driver. The “women can’t drive” stereotype is a rampant one, but multiple studies have shown it’s false. A 2010 traffic study conducted in New York, for example, found that male drivers were involved in 80 percent of accidents in which pedestrians were critically harmed or killed over a five year period. Furthermore, according to experts speaking to the New York Times, male drivers are more likely to take risks and drive aggressively than female drivers. Another study conducted this year by an insurance company in the U.K. found that, at a busy intersection in London, women were the better drivers. Assessed according to 14 different criteria, female drivers scored 23.6 out of 30 points, while men came in at only 19.8.

You know what’s not fun when you're on your way to work at 7:30 in the morning? Being touched without your consent. In June, a bill passed in New York that will give harsher penalties to people convicted to groping or grinding up against other subway passengers. The bill is a step in the right direction, but the fact that it’s needed at all says much about the depressing state of affairs for women traveling via public transit. And we should remember that New York isn’t the only place where women face harassment on public transportation.

Unfortunately, women who commute to work on foot also experience harassment on a regular basis. Catcalling and other forms of street harassment are common in cities all over the country. A study released in 2015 found that 96 percent of American women reported being harassed on the street at least once in the last year. Seventy-eight percent claimed to have been followed by a man or group of men, and to have felt that they were in danger as a result. That is RIDICULOUS.

5. Being slut shamed by randos.

In early August, Facebook user Scott Sparrow recounted a scene he witnessed on the London tube. He alleges that, as he sat and watched, a man in a suit approached a woman in a revealing dress and said, "Have some self respect when you dress yourself." Now, it should go without saying that making judgmental remarks about the clothing choices of total strangers makes you a Grade A, certified assh*le. Fortunately, there was a kickass old lady nearby to tell the guy off. Sparrow writes,

Old soon to be dead lady is having none of this and in a south london accent shouts out “She can wear or not wear whatever the f*ck she likes, even if she was naked with a sign pointing to her fanny (she said fanny on the central line by St Pauls) and the sign pointed to her fanny which said ...PARTY CITY ALL INVITED...then that would still be none of your bloody business now f*ck off back to your bored wife!"

If only there was a righteous, fearless old lady guarding every train!

“Man slamming” is a bit like man spreading — while walking! According to Jessica Roy in an article for The Cut, man slamming refers to the habit that some men have of walking around crowded city streets as if they own the place, barreling past other people and refusing to move, or even notice, if other people are in the way. Roy explains,

Think of manslamming as a cousin of manspreading, the subway scourge that’s become so pernicious, the MTA recently launched a campaign to combat it. Both involve questions of personal space that have vexed feminists for years — arguably, both are symptoms of a culture that teaches men to self-assuredly occupy any and all space available to them, regardless of who’s nearby.

Wanting to find out the prevalence of manslamming, Beth Breslaw conducted an experiment in which she refused to yield to other pedestrians. The result was that, although most women either moved out of her way or at least gave some indication of noticing when she collided with them, most men barreled right into her without batting an eye.

It’s a crowded, sweaty jungle out there in Commuting-land, but you can take comfort in the fact that, although it may never be your favorite part of the day, there are lots of ways to make your commute more pleasant and productive. Godspeed, all.