Those of us who have spent a significant portion of our lives relying on public transportation have become increasingly vocal over the past year or so about “manspreading” — that is, the practice of spreading one’s legs while seated on a crowded subway car such that the person doing the spreading takes up far more space than is actually necessary. An inconsiderate habit, it has the effect of limiting the space for other passengers, often in an unnecessarily painful fashion. So why do people do it? Do they really think they’re entitled to more space than the person sitting next to them? Do they just not know they’re doing it? Are they saving room for cats? What’s the deal?

In order to answer those pressing questions, Gothamist reporter Lauren Evans and cameraman and editor Jeff Seal recently took to the New York subway to talk to people about manspreading. Noted Evans in her write-up of the video, “Everyone we spoke with was very cordial, and no one used the term ‘ball sack,’ which was a welcome surprise. Many manspreaders were promptly contrite; others explained that they were happy to rein it in if anyone wanted to sit down. No one screamed or kicked or spreader in defiance.” I’m sure having a camera present had something to do with the interviewees’ deportment, but hey, whatever the reason, I’ll take it.

It’s a funny video, but at the same time, the main takeaway I got from it — or more accurately, from the responses the manspreaders gave in it — is this: Until people recalibrate their thinking such that manspreading becomes a thing of the past, we have to speak up when we become victims of it. This, however, brings up a slightly more serious issue: I understand why most of us don’t speak up; women in particular face enough harassment on the subway that to speak up to a manspreader could result in some terrifying consequences. And you know what? It sucks that anyone should feel that they have to choose between staying safe and not being squashed into a corner by someone who can’t be bothered to exercise a little consideration and keep their legs in line with, say, the width of their shoulders. The MTA’s subway courtesy campaign is a start… but does anyone else feel like manspreading should be a fineable offense, regardless as to the gender of the person who commits it? Because that sounds like an awesome idea to me.

Anyhoo, here’s a sampling of the types of manspreaders (and one non-manspreader) that seem to populate the subway in New York City; scroll down to watch the whole video:

When asked about whether he’d heard of manspreading, this guy got a little bashful and replied, “No, but is that why you asked me? Am I doing it?” In his defense, though, he noted that the train car wasn’t super crowded at the moment; if it were, he said, he would “constrict” a little bit.

The “We Have No Choice” Manspreader

“We have no choice to have our legs like that, you know what I mean?... It’s different for a woman,” this dude said, presumably referencing the fact than men have their delicate bits dangling between their legs, while women’s tend to be tucked up a little further. He kind of has a point… but I still have to ask: How much extra space do your balls really need? Because this looks excessive to me:

This guy insisted that what he was doing wasn’t manspreading. I’m willing to give him a bit of a pass since he has a bag between his legs (which, as we have noted in the past, abides by proper subway etiquette); he does still seem to be taking up a little more space than the bag strictly requires though. But hey, at least he’s not doing this, right?

This dude? I like him. He is a non-manspreader. He also has a bag between his legs, but he’s consciously made an effort to make sure he’s not taking up too much space with it. He said he, too, finds the practice of manspreading annoying; “I’ve been a victim of manspreading,” he said. We are all united, us manspreading victims. 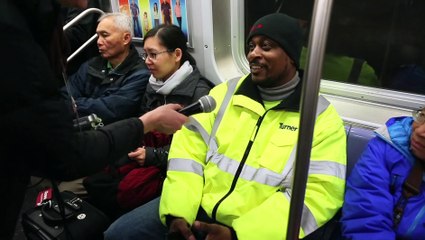