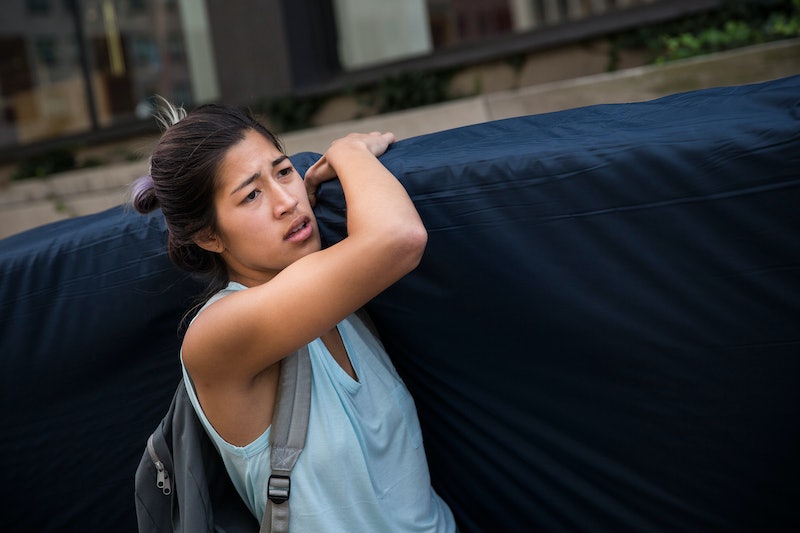 Sorry, Greek life defenders: According to sociologist Michael Kimmel, certain factors make some colleges more rape-prone than others, and the Greek system is one of them: Although not all fraternity brothers are rapists, of course, frat boys are three times more likely to be rapists then men who aren't in fraternities — a statistic which has been supported by numerous studies, including one published by a group of Ohio University researchers in the Journal of Interpersonal Violence. But Greek life is just one of the many factors Kimmel details in a recent piece for The Atlantic; titled "A Recipe for Sexual Assault," the piece delves not only into the structural elements of these schools that contribute to their rates of sexual assault and rape, but also into how these elements might be addressed and reorganized. The end goal? To make college a safer place for women — something to which all schools should aspire.

Kimmel relies on the work of Peggy Reeves Sanday, who two decades ago purported that some campuses were virtually rape-free, while others experienced sexual assault in frightening numbers. Her explanation for this difference was largely cultural; Kimmel, instead, decided to look at structural factors. In his words:

Upon learning of the recent survey results, I decided to analyze the findings using my training as a sociologist in an attempt to see whether they correlate with structural variables — some institutional arrangements that might lead to more “rape prone” and “rape free” campuses. Such an analysis, I figured, might help make sense of the apparently widespread perception among university presidents that sexual assault isn’t a problem on their own turf.

Efforts to parse this along a single line — public versus private, Greek versus non-Greek, sports culture versus non-sports culture, and so on — would, I suspected, yield little. A multivariate analysis — juggling several structural variables at the same time — might help unravel why some schools are more rape prone than others. It would help elucidate what’s happening inside those schools.

What Kimmel found confirms a lot of the thinking around what causes rapes to occur on campuses — and gives universities some idea of how to stop it. Here are some of the factors that Kimmel found are associated with increased instances of sexual assaults on campus:

This one you could have predicted: There isn't a lot of rape happening at all-women's colleges or at community colleges without much of a campus life. "Of course, that’s not to say that sexual assault is nonexistent at such institutions," Kimmel writes, "but many of the major structural features of the 'rape-prone campus' — a social life that revolves around the campus residential experience, party culture, weekend sports activities — are missing."

According to Kimmel, serial rapist in college needs motivation (a contempt for women and a sense of superiority over them), opportunity (a place to take women while they're overly drunk or drugged, for instance), and support from his friends (who may not speak out against him if he's suspected of rape). These sorts of rapes rarely happen in college dorms — they're more likely to happen in off-campus apartments, and especially in fraternities. "These residences tend to serve alcohol at their parties, including to minors," Kimmel said. "And I’ve known of at least a few administrators who opt to stay away from these events [to] avoid having to witness illegal activity and subsequently report on the activities. Though little data exists to confirm the role of these environments in sexual-assault rates, my analyses suggest that campuses without such out-of-sight, out-of-mind residential spaces are less likely to harbor and sustain serial predators."

This doesn't necessarily mean that colleges need to get rid of frats, Kimmel says; another way to make rape less likely would be for colleges to stipulate that only sororities can hold parties, and not fraternities, meaning that women would be the gatekeepers of who gets into the party (and who goes upstairs to their bedrooms).

According to Kimmel, a majority of sexual assaults on campus happen in the first three months of school — the so-called "red zone" — for college freshmen. Mentorship programs pairing freshmen and seniors, then, may go a long way toward preventing sexual assault — though, Kimmel notes, few such programs currently exist.

Research shows that athletes from "helmet sports" — football, hockey, and lacrosse — are far more likely to be accused of sexual assault than athletes who play tennis, track, swimming, and soccer. It may be because the helmet sports are likely to give the school a lot of revenue from alumni and local fans, giving them a protective bubble that leads to entitlement and a greater ability to get away with wrongdoing. The same qualifiers apply — not all helmet students are rapists, obviously, and an accusation is just an accusation until the perpetrator has been found guilty — but it's still a statistic worth noting.

5. Male Students Who Believe They Can Get Away With Rape

Here is a shocking statistic: 16 to 20 percent of male college students say they would commit rape if they could get away with it, according to two decades' worth of survey results gathered by UCLA Psychologist Neil Malamuth. Furthermore, when the word "rape" is replaced with "force a woman to have sex," that number jumps to between 36 and 44 percent. If male students are part of an institution that protects them from consequences — a fraternity, for instance, or a sports team — they may be more likely to rape because they're more likely to get away with it. "[T]he sense of entitlement — to act with impunity — seems to be what enables so many guys to believe they can do what they want," Kimmel writes. "And, when they’re enabled and abetted by administrators and alumni and boosters, they’re largely right."

All of these factors work together to make colleges more rape prone, but the largest factor may be that sense of entitlement. An easy way, perhaps, to reduce the number of rapes on campus is to punish rape when it occurs. Unfortunately, we've still got a long way to go, apparently, before colleges will consider punishing rapists.