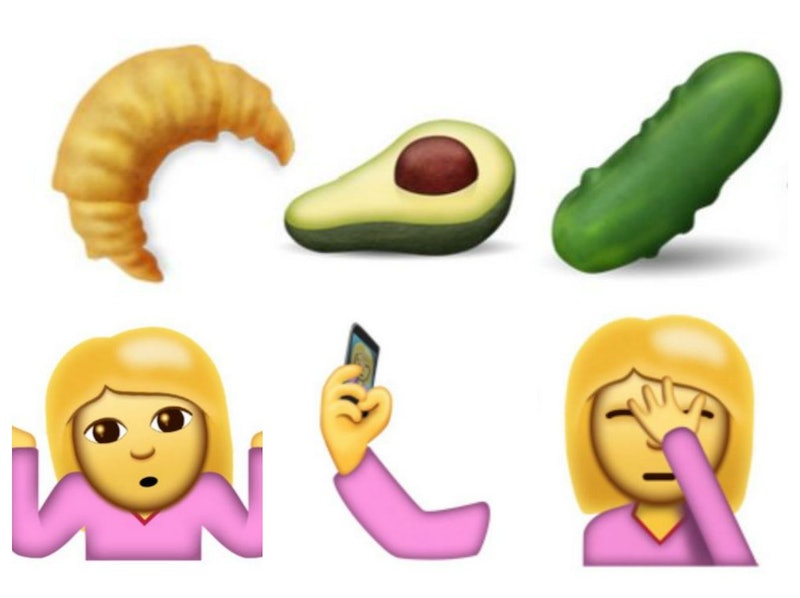 Unicode 8's set of 41 new emoji — 37 images and five modifiers — may have just been released in July, but we're already looking ahead to the next update. What will the Unicode 9 emoji look like? Obviously it will vary from platform to platform, but seriously, you guys — inquiring minds want to know. Luckily for us, Emojipedia is already on it with a set of mockups of the proposed Unicode 9 emoji. They know that we've already gone long enough without an avocado emoji, and that, we thank them.

Back in May, the Unicode Consortium announced that 38 new emoji candidates were in the running to be a part of the Unicode 9 update. The final approval for which ones made the cut will happen sometime in the middle of 2016 — and in the meantime, of course, we're all quivering with anticipation about what the new emoji will look like. The answer right now is, “we don't know”; however, if we take our cues from the existing emoji, we can come up with some pretty solid guesses.

That's where Emojipedia comes in. The emoji reference site commissioned graphic designer and illustrator Joshua M. Jones to create some mockups imagining what the Unicode 9 emoji might look like, with the results being based on the existing iOS set of emoji. “What was particularly fun about this project is that it required adhering to Apple's visual aesthetic as closely as possible, sometimes in reproducing characters, but also in envisioning how the company might visually implement particular references from the proposal,” wrote Jones on his website. “The way in which Apple implements shape, texture, and motion are pretty consistent, but the styles sometimes varied, which made it really fun to play with.”

Again, these aren't in any way "official"; they're not even a done deal, as far as the update goes. But they are still quite entertaining, so check out eight of my favorites here; you can see more over atthe Emojipedia blog. Because come on: You know you want to see what the Nauseated Face emoji might look like.

Along with the taco, the humble avocado has long been one of the most badly needed food emoji (insofar as we can say that any emoji is “badly needed,” that is, because let's face it: Our continued survival does not, at this moment, depend on the existence of tiny, digital pictograms) — so if we get it, it will probably look something like this. Yes, please.

But let's not forget the mysterious absence of bacon, either. I suppose we can probably chalk it up to cultural reasons — emoji are Japanese in origin, and Japan as a nation isn't nearly as obsessed with bacon as the United States is — but still. Bacon makes the world go 'round for many of us, so obviously we need an emoji that represents it.

Because crowns are for everyone, not just girls.

Not that you necessarily require a partner to dance, but sometimes, it's nice to have someone who's ready to boogie down with you, too. In my head, I call this one the Saturday Night Fever emoji.

Remember that whole thing where a shrug emoji has hitherto been conspicuously absent? Well, we might not be left wondering where it is for that much longer. I appreciate that Emojipedia's mockup takes its cues from the Information Desk Person emoji, more commonly known as Bitch, Please. There are many ways in which one might use a Shrug emoji, but no matter which way you look at it, I can't think of a better representative of the essential nature of a shrug than Bitch, Please.

And the same goes for the Facepalm, as well.

We've got hearts in every other color of the rainbow, so why not a black one? It goes with my deep, dark soul. Or… something.

Out of all of the candidates, this one is perhaps the most open to interpretation. Here, it's the Bitch, Please girl's arm snapping a picture of the rest of herself, which remains unseen; however, I could also see the final emoji looking like a picture of a picture of a picture (or something like that). There's an enormous number of possibilities — but we'll just have to wait and see first if any of these emoji gets the final approval, and if they do, what they'll officially look like.

Check out more over at the Emojipedia blog, and watch a few of them in action in the video below:

More like this
Here's What The Face Emojis Actually Mean
By Bustle Editors
TikTok Is Using A ‘Love Island’ Sound To Expose Their Weird Crushes
By Courtney Young
The Viral TikTok “30,000” Sound Fits Nearly Every Scenario
By Courtney Young
Kris Jenner’s Advice For Kim Kardashian Is Going Viral On TikTok
By Courtney Young
Get Even More From Bustle — Sign Up For The Newsletter