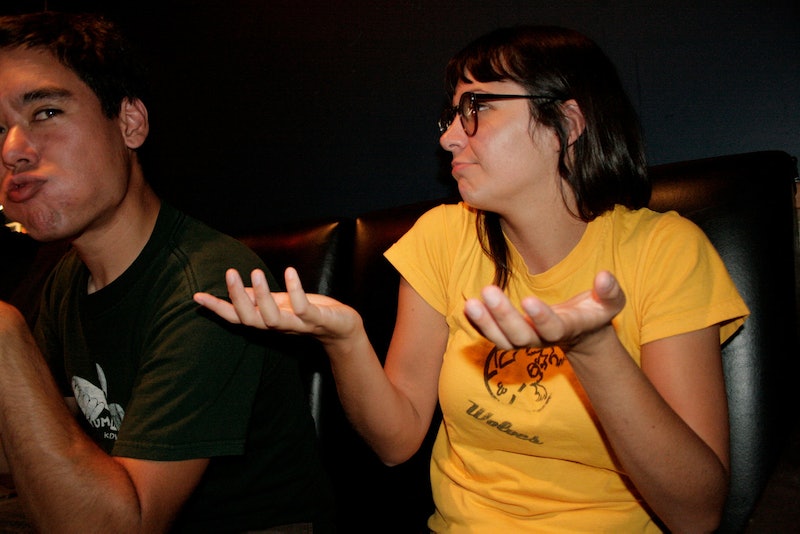 With a whopping 722 emoji available for all your texting needs, it always comes as a surprise when you realize there actually isn't an emoji for what you're trying to say — a dilemma hundreds of thousands of people faced after the SCOTUS decision to legalize same-sex marriage when they realized there is no rainbow flag emoji. Though that emoji should be first in line to get a spot our keyboards, there are several other emoji we could definitely use. For example, why is there no "shrug" emoji? Because that's one that we seriously need, STAT.

He's the I-don't-really-care-or-know-what's-going-on-or-take-life-seriously shrug emoticon that is made up of a series of keyboard characters that no one with a Western keyboard can replicate. Why? Because it's a "kaomoji," an emoticon that requires a Japanese keyboard to type. To use it, you can either pull the classic "search, copy, paste" trick or jump through a whole bunch of hoops to get a Japanese keyboard on your phone... but it's 2015. No one really wants to do something in three or more steps that can just be done in one, so I argue that it's finally time for the emoji keyboard to include a shrug.

There are a few emojis people use as a substitution for the shrug, but none of them entirely encapsulate the essence of the actual action itself. The neutral face emoji, for example, captures the nonchalance or indifference of a shrug; additionally, the information desk person (more commonly known as the hair-flip emoji or the "bitch please" emoji) can be loosely interpreted to be shrugging off her problems. Other than that, though, there doesn't seem to be much in the way of an emoji capable of representing the many things a shrug can mean.

So what do we need a shrug emoji for? Besides the obvious like trying to convey a Kanye shrug or depicting confusion, it can also be used to let people know you're too cool to care about anythinng; it can even mean that you're just exhausted by everything that's going on in the world.

Here — let's take a look at some scenarios in which people on Twitter wish they could insert a shrug emoji:

So basically, when people aren't busy typing out "shrug emoji" instead of adding a simple emoticon, they're busy wishing for a shrug emoji. Other examples of when the shrug emoji can be used include:

1. When you look fly as hell and nothing else matters.

2. When you're about to get in trouble but realize the consequences aren't that bad.

3. When you're trying to be humble (but most likely failing).

4. When you have absolutely no idea what's going on.

5. When everyone around you is being an idiot

6. When you're being coy

Luckily for all shrug-lovers, there is a sliver of hope. The Unicode 9 emoji candidate list, which tells us which emojis are in the running for the next update, includes the shrug emoji. For that matter, it also includes a selfie emoji, a handshake emoji, and a pregnant emoji. Until then, though, we can only keep copy and pasting our little complicated keyboard character friend, or not doing anything at all and just shrugging the whole thing off.