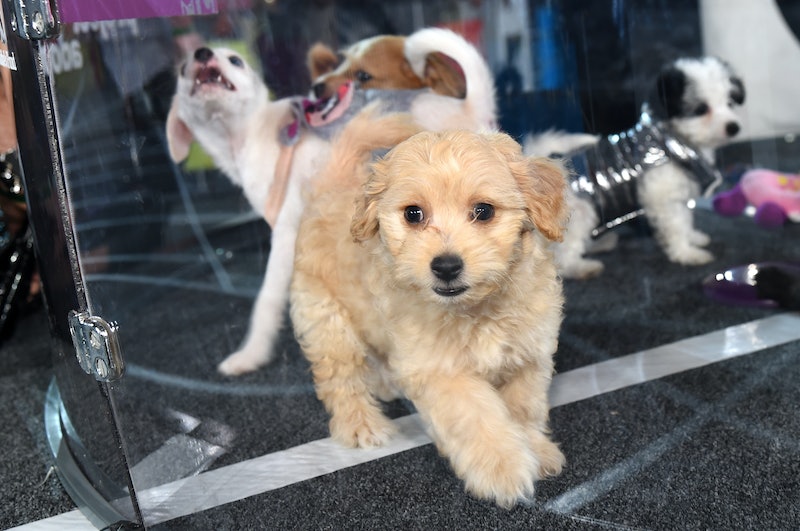 We make a lot of jokes about Lassie trying to tell us that Timmy fell in the well (again) — but have you ever seriously devoted time to figuring out what your dog is trying to tell you? Dogs' body language can communicate loads, so if you need a place to start, I've got just the thing: An infographic by the Tails to Tell blog that breaks down common dog behaviors and what they mean. Fido totally has your back, so we should have Fido's in return — and being in tune with our pups' feelings is the best way to do that.

Cat speak has been a frequent topic of conversation in recent months, from the scientifically proven ways your cat tells you it's happy to a number of weirdly common instances in which cats appear to be speaking English. We've talked somewhat less about dog-speak, though — but why? Dogs do tend to be a little easier to figure out than their famously fickle feline counterparts, which might explain why we've spent comparatively less time on them; however, that doesn't mean we should just assume we know everything they're trying to tell us. On the contrary — your pooch is just as worth puzzling over as your cat. Dogs know when people are mean to us and act accordingly, after all, so they really are human's best friend.

The infographic includes both negative and position emotions and behaviors, although obviously the positive ones are what you'll want to gun for as a pet owner. The short version is this: If your dog is doing something like growling, pointing their ears and tail down, or destroying furniture, it's likely feeling threatened, sad, or bored; if, however, it's emitting a high-pitched bark, jumping around, or sitting there with its tongue hanging out like a big ol' adorable derp, it's excited or happy. What makes the difference between an upset pup and a happy one? Typically how much attention you're giving them. If you're away for most of the day and your dog is doing nothing but mop or be destructive, you might want to look into doggy daycare — it sounds silly, but it might make a world of a difference for your canine buddy.

More like this
If You Have Pets, You Probably Don't Realize You're Making These Common Mistakes
By Mackenzie Edwards
The 10 Best Cat Puzzle Feeders
By Lauren Moison
My Picky Eater Dog Absolutely Devours This All-Natural Food
By Allison Berry
25 Cheap Ways To Make Your Cat 5x Happier
By Claire Epting
Get Even More From Bustle — Sign Up For The Newsletter