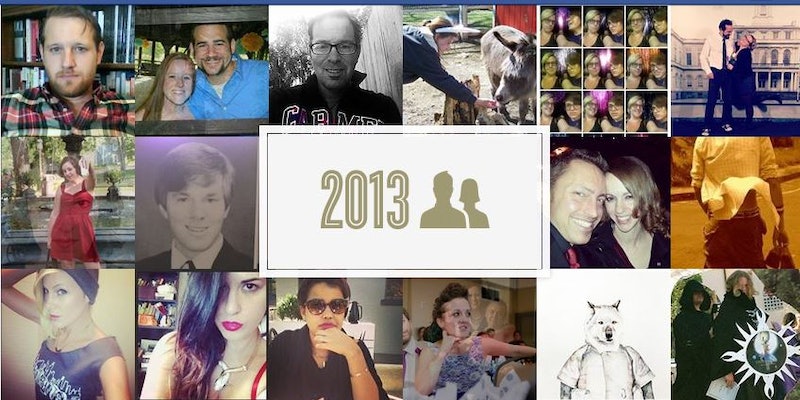 Facebook's year-in-review feature returns this December. The option lets you look at your 20 "biggest moments" on Facebook in 2013, and relive your friends' biggest Facebook moments this past year. I'm not sure how Facebook selects which friends to feature in your results, but I found mine well-curated and kind of delightful. Scrolling through the 20 featured moments, I felt happy for and proud of my friends, who, taken in aggregate, had quite a year. I was also struck by the breadth of events and accomplishments featured — academic, financial, familial, romantic, work-related.

There were statuses congratulating a sister on her first child, expressing excitement over a sister's pregnancy, celebrating being credit card and medical debt free, celebrating completion of the first year of a PhD program, relating a witnessed dog-napping, expressing excitement about a sold-out show, announcing the publication of a new poetry collection, and sharing news about going to a hospital. There were photos of a grandfather who had died recently, a first published academic paper, a city hall wedding, and two new births. There was excitement over finishing grad school and excitement over a two-year anniversary of quitting grad school. Two job announcements. The announcement of a cat's death. A first wedding anniversary celebration. Two pregnancy announcements (from the mom and dad of the same baby-to-be).

There was also someone's brother smoking a cigarette in the snow, a post about Steubenville, a photo at a Mets game, an exclamation (in agony or exultation, I know not) about the Hawks!, a Laguna Beach selfie, an Eartha Kitt quote, a picture of a meetup between old girlfriends, an announcement of becoming a notary public "after 3 years of waxing & waning levels of interest and effort" and the above otter pleading with folks to renew the Cincinnati Zoo levy. I can't help but come away from this thinking I have really awesome friends. [Cheers, folks!]

For the record, my biggest Facebook moments of the year include a friend's community garden plot, hanging out in a backyard, a Chinese New Year's parade, leaving a job, drinking wine with other lady writers, hanging out in another backyard (in a kiddie pool this time), a friend's beach wedding, a funny poster about avocados, a selfie, a picture of drinking tallboys with my sister and the following sign: