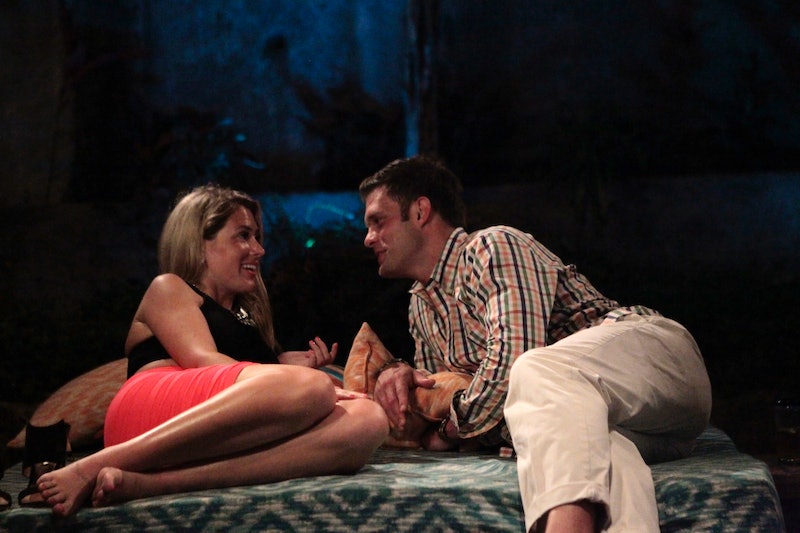 Fans finally heard from the Bachelor in Paradise villain Joe on tonight's episode of After Paradise. After seeing flashbacks of him behaving like a seemingly normal human being on Kaitlyn's season of The Bachelorette, Chris Harrison cut to some clips of Joe mocking Juelia. (Or, in his words, "what's her name?") Joe claimed that after being "heartbroken" by Kaitlyn, he reached out to Sam in order to get a head start before arriving in Paradise. According to the villain himself the two began texting about six weeks before filming kicked off, then they talked on the phone a few times to "strategize." But, he feels bad about all that now and Joe apologized to Juelia on After Paradise. Only, I'm not sure I buy it.

When asked how he feels about his actions now, Joe was quick to declare that he's "ashamed" of his actions. "It's disgusting," he said. "There's no excuse. I hope [Juelia] can forgive me, but if not, I wouldn't fault her." He went on to say that he "cringes" when he sees himself on TV, while also trying to explain away his actions by claiming that he thinks everyone can relate because "we all make mistakes for people we like." Yes, Joe, we make mistakes, but we don't all blatantly lie to people who trust us in order to get to someone else.

Yeah, nice try, Joe. I have to think that he's only sorry because he was promptly ditched by Sam when she arrived in Paradise and discovered he was the villain. Although Sam is certainly not innocent in all this, I have zero sympathy for this snake. And, as for that forgiveness he's hoping for from Juelia? If I was Joe, I wouldn't hold my breath on that one.