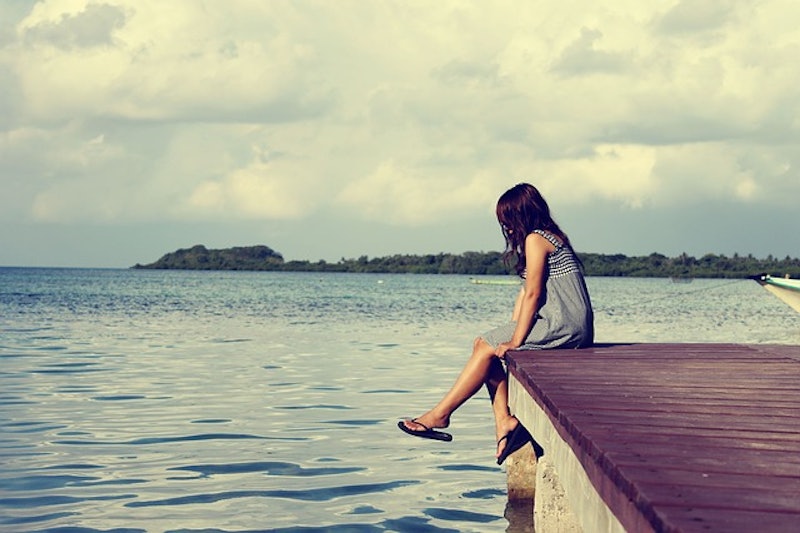 I once heard someone say that the biggest problem with human beings is that we tend to only realize we understand something after it's no longer an issue. The logical, rational question to ask in light of our perpetual, sustained dissatisfaction is why we don't do anything about it, or why we feel so held back from stepping into what we want. I think the answer is as simple as that we often don't realize something's wrong. We know we're upset, we know we feel unsettled, but those very subtle emotions can come and go as quickly as other, ultimately unimportant ones can and do.

The problem, then, becomes figuring how you're supposed to know when it's time to make an actual change in your life. Because on top of the fact that we're not particularly adept at deciphering our emotions is the fact that we're all pretty much conditioned to believe that someone or something else will save us, or more insidiously, that the answer lies in a different solution, rather than a different way of looking at the "problem" (and realizing it's not much of a problem at all). Fear not, I am here to light the torch and lead the way: here, six ways to know you're subtly trying to tell yourself that you're unhappy, and what change that feeling is trying to get you to make.

This is usually a defense mechanism, because if you're the one pointing out how they're imperfect, it's shifting attention away from how you are. It's essentially what you do when you're not feeling accepting of yourself or are fearing judgment from others (because judgment = rejection = exclusion = not survival = panic for humans).

Even if you can stave off those feelings with medications or food or distractions, they continually reappear as frequently or more frequently than other emotions do through your day-to-day life. Usually, a subtle but persistent feeling of discomfort means that you're not thinking about your life the right way more than you're not actually living it the right way. You're not focused on gratitude, you're programmed to want to just fix things and change them rather than settle into them.

You Feel As Though You Can't Get Ahold Of Your Weight, Money, Or Substance Use — Even If The Struggle Is Subtle

All of those things tend to come back down to an emotional issue, as people use food, numbing beverages/drugs and shopping/ideas of what new things "make them" to numb themselves when something is very wrong and they don't know what else to do about it. Now, the trick here is that it doesn't always have to be a matter of addiction or out-of-control spiraling usage. More often (and more insidiously) it's not so bad that it's a huge problem, but it's subtle enough to indicate that there's something more at play.

... Which essentially means that you're just distracting yourself so you don't have to deal with whatever it is you truly want (or are afraid) to do. Busying yourself constantly means you're becoming more aware of what it is you really want to spend your time doing — and equally as nervous to make yourself vulnerable enough to do it.

You're Closed Off To Relationships

I once heard it said that what we're here for is not our own self-aggrandizement, but for other people. We're here for love. When you boil down anybody's idea of what an ideal purpose in life is, it's to help other people, or be influential in some profound and soulful way. Somewhere along the line, we loosened our understanding of the importance of the people in our life, rather than the things in it. But when you're disconnected from the relationships in your life, it means you're disconnected from yourself. The things you believe are making you happy are probably just filling a temporary space, one that you've carved out from a lack of connection — first with yourself, as that will naturally extend out to others.

You've Adopted A Worldview That Revolves Around Your Existence Being Meaningless

Alright, time for some real talk: you're totally free to adopt whatever personal dogma you so desire (obviously), but it's not natural for humans to default on life being meaningless. We love meaning. We seek it at any and all costs. We create it where there is none, we suffer when we feel none. If you have gotten to the point of so much apathy that you have to just fall back on the hope that things are meaningless and nothing matters, it doesn't mean that you actually feel that nothing's worthwhile, it means you feel everything is meaningful but you don't like what that "meaning" is and you feel powerless to control it. It's akin to the feeling of being numb, which is not the absence of emotions, but all of the emotions at once. It's psychological overload. It means you have to start unpacking. It means you're using nothingness as a replacement for not knowing how to deal with everything else.