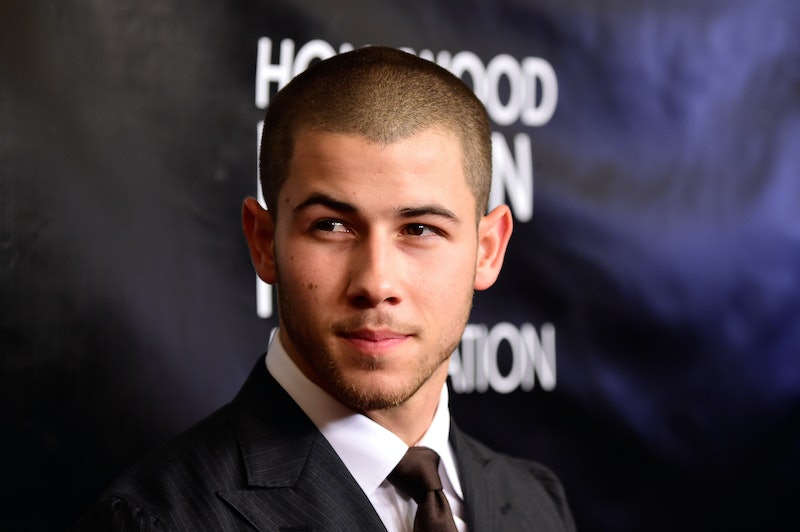 The ladies of Celebville aren't the only ones who get to have fun and experiment with hair colors not found in nature. That handsome hunk Nick Jonas had blue hair on his Adon cover and that wet-look, blue-painted scalp made him appear a bit like a superhero.

Even Nick Jonas gets the blues but the singer makes that hue look sooo good!

Jonas is one of the solo male superheroes of the pop music scene and is easily the most musically famous of his brothers since the Jonas Bros split a few years ago.

Jonas looks quite futuristic in his September spread for Adon, even though it's the mag's '80s issue. It's probably the fact that his face is surrounded by a fabric that resembles tin foil. The sharp and severe lines of his blue hair are thoroughly '80s, though.

His hair also mimics a swimming cap. It was likely meant to appear wet and he probably had to rinse the hair dye out immediately after the shoot wrapped. That had to be fun!

His bushy brows and his five o'clock shadow remain fully in tact, so it's not like Jonas was unrecognizable. Personally, I am glad that Adon left his brows and facial hair natural and didn't paint 'em blue. That would have been too much.

It's fashion editorial, so the singer had to go be a bit edgy and step outside of the tailored suit look.

Jonas certainly knows how to make a statement on a mag cover — remember his shirtless shots for Flaunt ? His blue hair and tin foil-y jacket —at least I think that's a jacket!— are largely out of the norm for him. Still, he wears 'em well.

If you are a dude and want to try this look, or if you are a lady with close-cropped locks, the hair was the result of Manic Panic, according to Adon's credits.

Don't you love the juxtaposition of classic Nick Jonas and fashion-forward Nick Jonas?

Jonas' blue is more of a cobalt shade and therefore isn't "merman" hair. But here are some of his fellow blue 'doers.

Hilary Duff went with a sea blue shade for mermaid hair this summer.

Jonas' reported ex Rita Ora has been blue with a genie ponytail.

Kylie Jenner has been the queen of blue locks.

Katy Perry has been blue like a billion times. OK, not a billion, but a lot.

The singer has been so many shades of blue.

I'm liking Jonas' temporary stop at blue hair, simply because it's fun to see him step out of his classic-leaning comfort zone.