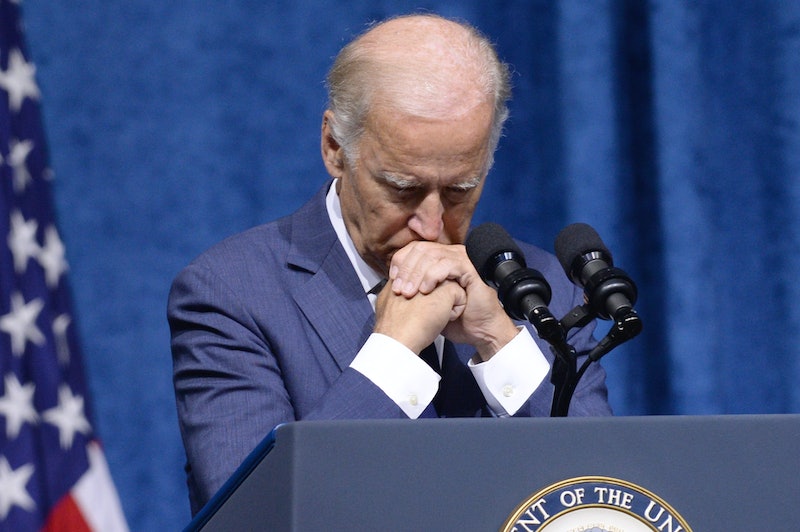 Speculation is heightening as to whether or not Vice President Joe Biden will seek the Democratic nomination for the 2016 election. The former Delaware senator certainly has a lot going for him, including a blessing from President Obama as well as an impressive, lengthy political career that firmly establishes his policies on key issues. What's Joe Biden's stance on women's rights? The potential candidate has done some amazing things for the cause, but his mixed record when it comes to abortion makes him a fraction of the women's rights candidate Hillary Clinton is shaping up to be.

Perhaps his most important move came when he was a senator and introduced the Violence Against Women Act in 1990. The bill was passed four years later and included measures that provide more resources to women's shelters in addition to establishing a national hot line for women who are victims of abuse. Shortly after he assumed the role of VP, Biden created an official Violence Against Women White House advisor position in 2009, which was held by Lynn Rosenthal who is now a senior advisor to Biden.

Just three years later, he joined forces with the president on a comprehensive women's rights initiative known as the Obama-Biden Plan. The plan adds to Biden's anti-domestic violence work while also strengthening VAWA as it continues to periodically be reauthorized. A particularly important marker of the Obama-Biden Plan is its stance on reproductive rights. The plan explicitly advocates for a woman's right to choose as well as preventative measures in an effort to curb unwanted pregnancies.

Rather than appearing pro-life or pro-choice, Biden has a mixed-choice record, according to pro-choice advocacy group NARAL. In 1993, he co-sponsored the Freedom of Choice Act, which would establish that every woman "has the fundamental right to choose to bear a child; terminate a pregnancy prior to fetal viability; or terminate a pregnancy after viability when necessary to protect her life or her health," according to the bill itself. The Freedom of Choice Act has yet to be newly referred and considered, and is thus in limbo. According to OnTheIssues.org, Biden's statements in interviews indicate a devoutly religious politician who would rather impose neither side's perspective on voters, however.

Speaking in a 2007 NBC's Meet The Press interview, Biden said that he opposed abortion funding as it imposes "a view to support something that is not a guaranteed right but an affirmative action to promote." Surprisingly, Biden also seems to advocate for religious freedom when it comes to an institution's right to administer reproductive healthcare. Biden had this to say about the subject during the 2012 vice presidential debate:

I do not believe that we have a right to tell other people that — women — they can't control their body. It's a decision between them and their doctor. In my view and the Supreme Court, I'm not going to interfere with that. With regard to the assault on the Catholic church, let me make it absolutely clear, no religious institution, Catholic or otherwise, including Catholic Social Services, Georgetown Hospital, Mercy Hospital, any hospital, none has to either refer contraception, none has to pay for contraception, none has to be a vehicle to get contraception in any insurance policy they provide. That is a fact.

Compared to presidential hopeful Hillary Clinton, Biden's views on reproductive rights are relatively murky. Clinton has consistently established herself as a pro-choice candidate regardless of potential religious affiliation. Likewise, Bernie Sanders is so incredibly pro-choice that NARAL has given him a 100 percent rating.

Editor's note: An earlier version of this article's headline described Biden's stance on women's rights as "impressive"; this description does not allow for the nuance in Biden's position. We regret this error.