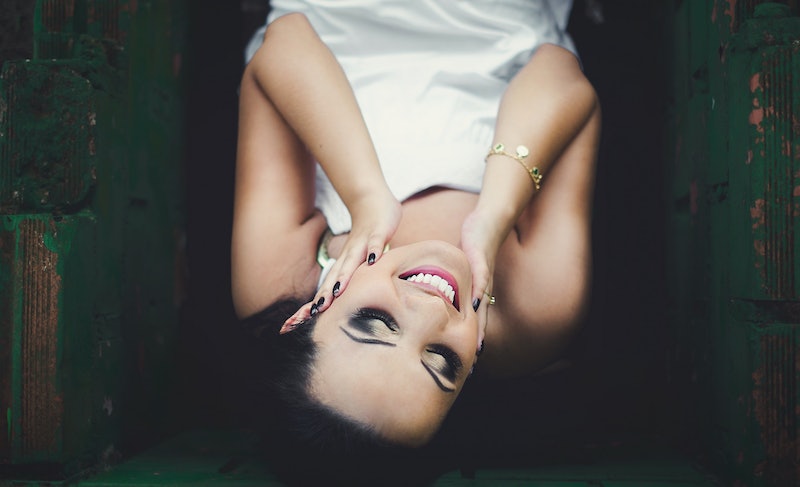 How do you feel about period sex? I used to be nervous about the idea, until I realized how amazing it could be. Yes, in part because I didn't want to lose out on sex especially as I'm so horny on my period I could eat my own face (if you leave me on any public transport for more than four seconds I will be thinking about sex for the rest of the journey), but also because the sex is just really fun. But it took a lot for me to come around to the idea. I spent about eight years of my sex life thinking periods just meant dry humping, blow jobs, and boob play. Well no longer.

I'm a full-blown convert, but as someone who wasn't always so into it I completely understand if you're feeling nervous. It's frankly really messy, and unfortunately we grow up being taught periods are something to be ashamed of and hide. Between ridiculous commercials (who knew I liked mountain biking so much when I get my period?) and a thousand different scented tampons— that are all discreet because god forbid any man has to be forced to look at something as offensive as a tampon—it's no wonder we feel self-conscious. And it takes a while to shake that feeling.

So how can you make yourself less anxious if the whole idea feels a little overwhelming? Try these seven ideas:

OK, so that may sound a little frank, but it's true. Depending on what day you're on of your period, you may end up with a massive mess. So if you're worrying about your sheets it's best to get something you can put on top.

3. Invest In A Menstrual Cup

Some menstrual cups mean that you can have sex during your period, supposedly without the mess. Yes, really! How amazing is that? I haven't tried it yet (between PCOS meaning I barely get my period, and my personality meaning I barely get sex, it takes a while for them to overlap) but I'm totally going to.

4. Hop In The Shower

All of it still feeling a little much? There's nothing wrong with starting sex in the shower, where the mess is less of a big deal. Chances are you'll adjust really quickly and move on to the bedroom, but just stick with what makes you feel feel comfortable.

One of the easiest ways to ease anxiety is to discuss it with your partner before hand. I'm not saying you need to work out a play by play, just that they can help make you feel comfortable and, hearing that they're completely fine with it will make you feel better.

It's a good intro to sex during your period. You can mess around without the pressure of someone else being there, and see that it's not really a big deal. And in fact, a lot of people claim it feels even better than regular sex. That'll get you hooked.

7. Read Up On The Benefits

Fewer period cramps? More lube? Shortening your period? Seriously, just take a look at why period sex is great and you'll want to give it a go. Yes, sex is amazing but making your period better is even amazing-er.

Want more of Bustle's Sex and Relationships coverage? Check out our latest video on sex positions for smaller penises below.