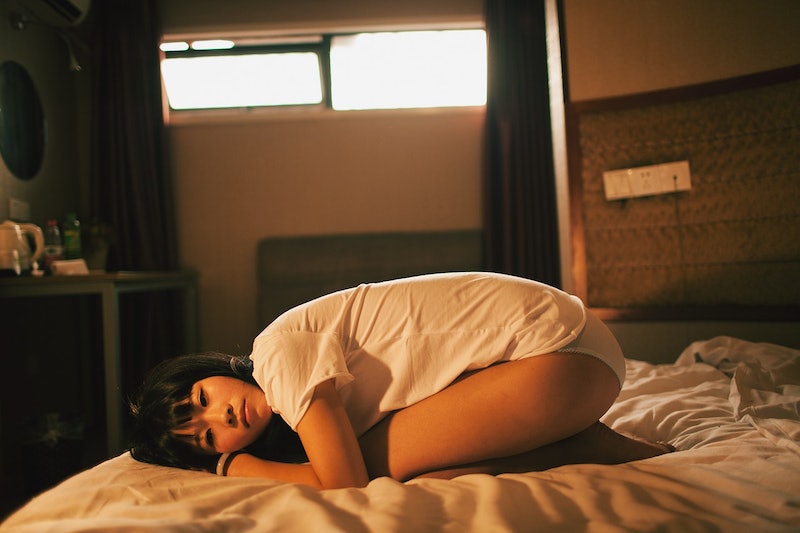 Period sex is an interesting topic. Some people are into it, some aren’t, and there is very rarely anyone who falls into the middle. And apparently, those who love having period sex are, like, really into it. But no matter what side of the fence you are on about the topic, there are some downsides to getting it on during that time of the month.

For starters, your cervix is open during your period. Because of this, you’re far more susceptible to contracting STIs. There’s also the mess factor. I don’t care what anyone says about period sex not being messy; it’s messy as hell. And if you don’t believe me, you can ask my dry cleaner the intimate details of exactly how horrified they were when I brought in my white sheets to be cleaned after one period sex experience. It can also be a little nauseating, because “Ew, blood,” and not many people (besides vampires) utter “Yeah! Blood!”

But despite the “ew” factor, the STI situation, and the boatload of a bloody mess that can wreak havoc on everything in sight, there are times when having sex during your period is totally, absolutely worth it. Here are five of those times.

1. You’ve Been Having One Hell Of A Dry Spell

Haven’t had sex since 2012? Yikes. No judgment, of course; but if you FINALLY get a chance while you happen to be riding your crimson wave, do not let that stand in your way. Besides, you never really liked those white flowery sheets anyway, and have been looking for an excuse to ditch them. Now you have one!

2. You Know You’re About To Have One Hell Of A Dry Spell

Maybe you’re joining the Peace Corps, or are about to dump that good-for-nothing dude who refuses to get a job, or you’ve given up on love entirely and are taking a 365-day vacation from sex. No matter the reason, if you know a dry spell is in your future, it’s best to take advantage of whatever sex you can — your period be damned.

While you may not feel at your sexiest when you’re gushing blood 24/7, having sex during your period can really help with cramps. Orgasms release the necessary concoction of dopamine and oxytocin to really kill those treacherous cramps. Granted, it won’t stop them altogether ... so you’ll just have to have more sex, again and again.

4. It Will Kick Your Period To The Curb

Fun fact: Having sex can shorten the length of your period. Yes! It might seem too good to be true, but with each orgasm, all that internal contracting flushes out blood and uterine lining ― which is what your period is, anyway. Basically, having orgasms is just getting all that out faster. Which will, in turn, make your period shorter than usual.

Ever try chocolate lube? Here's a hilarious taste test of 6 flavored lubes so you never, ever have to try them yourself:

5. Because You Should Try Everything Once

Since everyone has an opinion about period sex, don’t you want in on that, too? You can’t say whether or not you like it if you haven’t tried it, so forget the mess and just give it a whirl. You might find out that it’s totally your thing, and end up asking Santa for black sheets for Christmas this year.