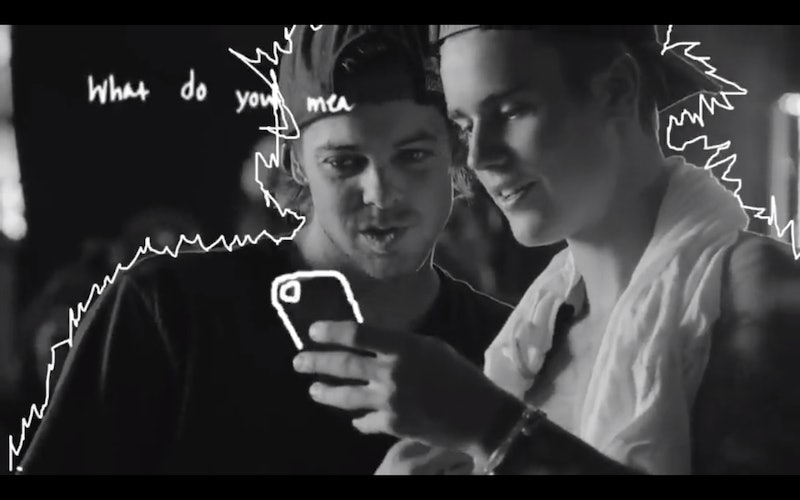 This moment has been so long in coming that I almost forgot what we were even waiting for, but it's finally here — Justin Bieber dropped his newest single, "What Do You Mean" on Friday. And about time, too! He's been teasing us with this song's release since Jul. 29, when he announced it on Ryan Seacrest's morning show, so we've had just one day short of a full month to listen to leaked clips of the song over and over, speculate on what "What Do You Mean" could be about (cough couch Selena Gomez cough cough). Not to mention just generally drive ourselves crazy wondering if Bieber's next album is going to be a critical flop like his compilation album Journals, which was released to zero fanfare in 2013, or full of guilty pleasures that you'll lie about listening to on repeat, like 2012's Believe. (Not that I listen to that album or anything, oh my god are you kidding me? *Frantically scrambling to hide my iPhone behind my back.*)

And it wasn't like we were just allowed to relax while we waited for the fateful date of Aug. 28 to arrive! Every time you were able to forget that the song was just out there in the ether getting ready to drop, another celebrity would tweet about "What Do You Mean" and remind you all over again. I don't know how I've gotten a moment of sleep ever since its announcement, so whether it was good or bad, listening to it would've been very necessary closure. And with that, I issue the final verdict: it's amazing. The lyrics seem fairly straight-forward, but Bieber still manages to layer a lot of symbolism and sultry crooning over the words. But what do those words even mean? Let's start with the chorus.

The chorus opens and ends the song, and it's pretty self-explanatory. Bieber is lamenting his relationship with a girl who keeps giving him mixed signals about whether she wants him to stay with her or not. I mean, at least he didn't reference any "Blurred Lines," so the fact that he can tell that his girlfriend is nodding when she doesn't really want to do something does show a lot of promise to me. He then launches right into the first verse.

Now here's where my heart really starts to feel for the boy. Being with someone that makes it impossible for you to tell if they're happy with you or complaining about being with you just seems so rough. I mean, actually, that describes me in most of my friends, but I'm not dating any of my friends, so my sarcasm is OK. Also "make up your heart?" Classic Biebs.

First you want to go to the leftThen you wanna turn rightWanna argue all dayMake love all nightFirst you're up then you're down and then betweenOh, I really wanna knowWhat do you mean?

The bridge, of course, immediately leads fans to start fanning themselves. "Make love all night?" Swoon, swoon, Bieber. By this point in the song, I'm literally frustrated on the pop star's behalf. Like, seriously, is this his answer to Taylor Swift's "Blank Spaces" or something? Why does he have to deal with "screaming, crying, perfect storms, I can make all the tables turn?" This relationship is starting to sound unhealthy; maybe he should get out of it.

You're overprotective when I'm leavingTrying to compromise but I can't winYou wanna make a point but you keep preachingYou had me from the start, won't let this end

The final verse shows Bieber's willingness to fight for this relationship no matter how hard it gets, but he adds one more line overlaid with the final repeat of the chorus that really just sums up the song perfectly.

Seriously. All this confusion is enough to drive a man crazy. Bieber's upcoming album will be out on Nov. 23. As I put this song on repeat for the next week, my only request is that, next time, he doesn't make us wait three years in between albums. Listen to it below.