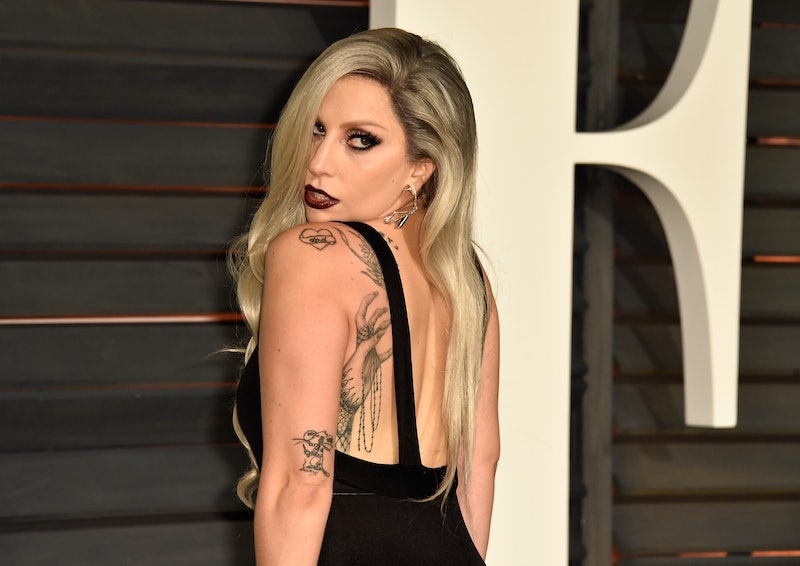 Part of the thrill of an anthology series like FX's American Horror Story is watching the cast adopt entirely new personas every season. Over the course of four seasons, we've watched Lily Rabe played a possessed nun and an ethereal witch; we've watched Sarah Paulson play a lesbian journalist and a two-headed sideshow attraction; we've watched Evan Peters play a ghost and a Frankenstein's monster. The upcoming fifth season, Hotel, looks to be giving the show's deep roster of talent a chance to play their craziest, most divergent characters yet, based on the first batch of American Horror Story: Hotel production stills just released by Entertainment Weekly.

These 11 photos come quickly on the heels of EW's scoop-filled report on the new season. Among the tasty tidbits spilled in the magazine's cover story include the introduction of two new iconic villains in the vein of Rubber Man and Bloody Face. The first is the Ten Commandments Killer, presumably killing off residents of the Hotel Cortez in the vein of the religious laws (a la John Doe's obsession with the seven deadly sins in Se7en). The second is the Addiction Demon, the creature with no eyes or mouth that was teased in the latest promo. But the report also gave details about many of the cast's cryptic characters... and we now have faces to go with those descriptions.

Here are pictures of all 11 of Hotel's major players, with a brief recap of who the character is, and what each actor had to say to EW about their role:

Who She Plays: Ramona Royale, a famous actress who used to be romantically linked to Lady Gaga's character. She'll team up with Matt Bomer to take her down when Gaga gives them both the cold shoulder. "They are powerful women at opposite sides and at odds with one another, each believing that they’re right."

Who She Plays: Iris, the mother of Matt Bomer's character, and also the Cortez's front desk clerk. She works at the hotel in order to keep an eye on her estranged son. "Iris is overprotective with a capital O, especially now since her son is ill. She wants to be there every day to make sure he’s all right, and she’s very controlling that way."

Who He Plays: John Lowe, a detective who comes to the Cortez to investigate the aforementioned Ten Commandments Killer. He and his family soon find themselves inextricably caught up in the intrigue of the hotel. "He has a family he loves very much but that is sort of falling apart. He struggles with a lot of things. It’s clear most of what John struggles with is control."

Who He Plays: Donovan, a man who's been in a relationship with Lady Gaga's character for 20 years. He finds his position with her jeopardized when she meets Finn Wittrock's character, and the three quickly fall into a love triangle. "He’s very interested in domesticity and sort of nesting and hunkering down and having her to himself every now and then, and that doesn’t go over so well with her limitless hunger."

Who She Plays: Claudia, the editor of Vogue who will probably wish she'd never checked into the Cortez. "She’s kind of outlandish. She thinks she’s indestructible and nothing’s going to hurt her."

Who She Plays: "The Countess" (real name Elizabeth), a glamorous socialite who drinks the blood of victims she kills with her razor-sharp metallic glove. Lest you think AHS is about to tackle vampires, rest assured that Elizabeth is 100 percent human. (Think less Count Dracula and more Elizabeth Bathory.) "She’s extremely strong. She’s been through so much. It’s kind of impossible for anything to penetrate her."

Who He Plays: Gabriel, an addict who couldn't be further from Greenfield's New Girl character, well-groomed yuppie Schmidt. "He’s a Hollywood junkie. Originally, he had a job and was more preppy or business. And Ryan [Murphy] came back and was like, ‘I think we should be more rock and roll.’"

Who He Plays: Will Drake, a fashion designer who checks into the hotel with his son. He'll help create one of Hotel 's connections to past seasons of AHS , when he meets with real estate agent Marcy, played by Christine Estabrook in the role she originated in Season 1's Murder House. "We do go to the Murder House for one episode," showrunner Ryan Murphy promised.

Who She Plays: Hypodermic Sally, another addict living in the hotel. Paulson's AHS history includes a helpful medium, an intrepid reporter, a protective den mother, and a naïve circus freak. It should be fun to watch her chew the scenery as the against-type role of Sally. "She’s selfish. She will put a stiletto in your face if it means she can get what she needs. But she’s also like a broken rag doll."

Who He Plays: James March, the owner and builder of the Cortez, who we'll see in flashbacks to the '30s. After playing a string of misunderstood good guys, this role — which seems inspired by the real-life story of serial killer H.H. Holmes — is the biggest departure for the actor to date. "He’s the builder and owner of the hotel from the 1930s, and he is unique. He’s designed a hotel to cater to his specific needs, which tend toward the dark evil."

Who He Plays: Tristan, a model who meets The Countess after a fashion show that's held at the Cortez. She wastes no time in seducing him, and he quickly becomes a willing participant in her bloodthirsty schemes. "He’s got an addictive personality. I think he’s hypersexual also. It makes him a prime candidate for the Countess’ charms and he is very willingly seduced and then turned by her."