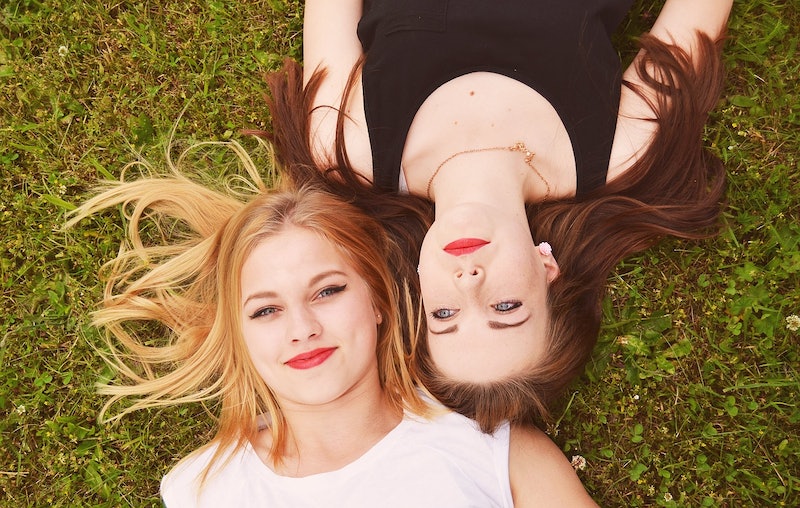 Human sexuality is immensely complex: It's a huge spectrum that encompasses all kinds of gender expression, sexual preferences, fetishes, and more. Rather than a boring, gay-or-straight-only world, the broad range of gender identities and sexual orientations makes our human experience a more exciting, more tolerant, and more love-filled one. A new study offers even more insight into how our social experience shapes our gender or sexual identity, and confirms that female sexuality may be more flexible and adaptive than men's.

The study uses data from Add Health, which followed over 5,000 women and over 4,000 men through a series of "waves," beginning around age 16 and ending around age 28. Over time, researchers tracked changes in sexuality, asking if they had experienced same-sex attraction or engaged in a sexual act with a member of the same sex. The author of the study, Elizabeth Aura McClintock, an assistant professor of sociology at the University of Notre Dame, noted that women's sexuality from wave to wave was more likely to change.

The researchers offered this possible explanation: These women might have less inclination to experiment with members of the same sex, because they have "more romantic opportunities" with male partners in the first place than less attractive, less educated women. Thus, their social position "facilitated a hetero-conformist identity" which could have discouraged alternative sexual identities or experimentation. However, women with less favorable heterosexual options have a greater likelihood of experimenting with same-sex partners, and, in turn, are more likely to incorporate the same-sex acts into their sexual identities than men are.

These findings support what any of us who have studied gender and sexuality have always understood: Our sexual identities are, at least in part, socially constructed, and are flexible and fluid, affected by a variety of factors that play into how we perform and express our personal gender identities and sexualities. The most fascinating revelation of this study, of course, is the evidence that women, on the whole, are more open to the fluidity of gender and sex than men are. Between ages 22 and 28, women were three times as likely as men to change their sexual identity.

"It is important to emphasize that I am not suggesting that same-sex unions are a second-best option to heterosexual unions," McClintock said. "And I do not think that women are strategically selecting an advantageous sexual identity or that they can 'choose' whether they find men, women, or both sexually attractive. Rather, social context and romantic experience might influence how they perceive and label their sexual identity."

Of course, gay people are born, not made, but that doesn't necessarily mean that our social experiences have no influence whatsoever over our ever-changing, fluid sexual identities. Gender and traditional gender roles are a social construct, and we should be free to express our gender and sexuality however we see fit, regardless of what society tells us is "the norm."

Here are five myths about sexuality you might have been taught growing up, but then realized as an adult are 100 percent BS.

Contrary to what the patriarchy would have us believe, women aren't defined by their virginity. Although religion, parents, and pop culture can all make a huge deal of maintaining your virginal status as long as possible, the fact of the matter is that the act of having sex does not and should not define you, as a human nor as a woman. When and with whom you have sex is your choice — whether you wait until ninth grade or your wedding day, whether it's with a man, woman, or both — the only thing that matters is that it's a choice you're comfortable with. We should all stop making such a fuss and placing such importance on virginity, IMHO.

3. Penetration And Sex Are Synonymous

Repeat after me: You do not have to be penetrated to have sex. The act of having sex encompasses such a huge range of activities that it's ridiculous to assume that a penis or dildo needs to be involved in order for sex to be "real." Plus, it totally excludes non-heteronormative kinds of sex. There are plenty of ways to have an orgasm that don't involve penetrative sex, because let's be honest: That doesn't always work for everyone, anyway. If someone tries to tell you off for saying you "had sex" with someone when all you did was engage in oral, politely remind that person that sex can be whatever we define it as, not what society assumes.

4. Gender And Sexuality Are The Same Thing

Without making a PowerPoint detailing all the intricacies and complexities of human sexuality, let me just reiterate that your gender and your sexuality do not have to be the same thing. For people who don't get that the gender binary is outdated, it can be hard to understand the ways gender and sexuality differ, as well as interact. You might express your gender in one way, but define your sexuality in another. At the end of the day, despite society's obsession with putting people into neat little boxes, how you label and express all parts of your sexual identity are totally your choice.

This antiquated misconception probably stems from the stupid idea that women are all emotion while men are all physical. Despite the fact that a 2014 study found that men crave sex more than women, it's unfair to generalize and assume that just because I'm a woman, I don't think about sex 24/7, or just because someone is a man, he can't spend hours making a Pinterest board for his dream wedding. Again: Sexuality is a spectrum, and rather than making assumptions based on gender, we should understand that sexuality is an extremely personal thing, and never judge someone for their desires or needs.