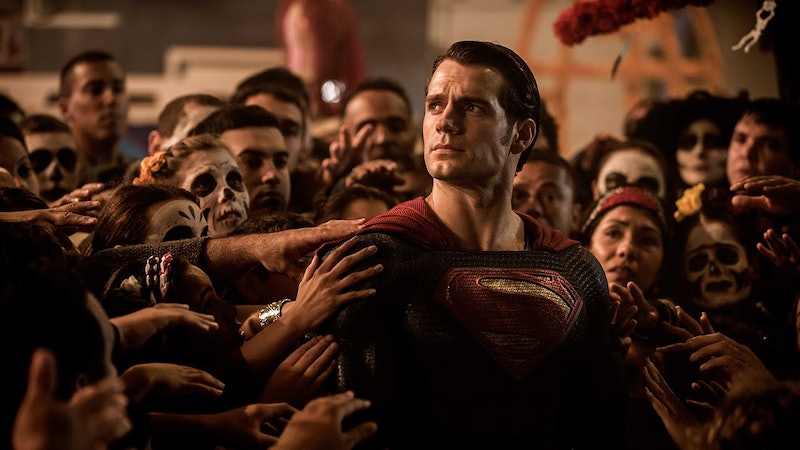 Who would win in a fight between a human in a bat costume with neat gadgets and an indestructible god-like alien who can fly and shoot lasers out of his eyes? While the question posed by the title of D.C.'s upcoming superhero mash-up movie Batman V Superman: Dawn Of Justice may seem like a foregone conclusion, recent rumors about the future of the comic book film franchise cast doubts on that outcome. Although anticipation is high for the two iconic heroes' first live-action onscreen appearance together, sources are saying that a sequel to 2013's Man Of Steel may be dead in the water. According to DenOfGeek, Man Of Steel 2 has been put on "permanent hold" by Warner Bros. Studios.

Although reports earlier this month claimed that a screening of Batman V Superman for WB execs was a "glowing success" and received a "standing ovation," this latest news doesn't inspire the same level of confidence in the film. If WB was as thrilled with director Zack Snyder's sequel as those reports suggested, wouldn't they be jumping at the chance to saturate the market with yet another superhero film that audiences all over the world would be guaranteed to throw their money at?

Before Henry Cavill donned the red and blue suit, Brandon Routh infamously only got one solo turn as the Caped Crusader in 2006's Superman Returns ; is Cavill bound for a similar fate? Will his iteration of Supes be relegated to merely popping up in big team-up films like 2017's Justice League Part One and 2019's Part Two, without ever receiving another solo film of his own?

This rumor likely comes as a bit of a shock to fans who were excited by the reports just a few days ago that Mad Max: Fury Road director George Miller was being courted by WB to direct a potential Man Of Steel sequel. So what happened? According to DenOfGeek, those reports were only half true: Miller is being courted by WB to direct a superhero movie — just not a Superman movie. He could end up signing on to any of the announced D.C. films that don't have a director attached, like The Flash (2018), Cyborg (2020), or Green Lantern Corps (2020); Miller could even be in talks to direct a future project that hasn't been announced yet.

This must be a particularly hard kryptonite pill for the Man of Steel to swallow, given how rapturous WB's response to Batfleck has been. News broke in July that Ben Affleck would be writing, directing, and starring in his own Batman standalone film, to be inserted somewhere into D.C.'s meticulously-planned lineup of movies through 2020. Then, after the Dawn Of Justice screening one month later, execs were supposedly so impressed by Affleck's performance that they immediately approached him about signing a contract that would extend his solo franchise to a trilogy, locking the writer/director/actor in with the studio for at least the next 10 years.

While news of this supposed Batfleck trilogy awaits confirmation, fans of Cavill's portrayal of Superman are likely growing increasingly impatient. First, his inaugural solo movie garnered a decidedly mixed reception; then, what was supposed to be his sequel was transformed into what's now essentially a prequel to Justice League ; and now, his first true sequel has reportedly been scrapped while Affleck gets courted for a decade of superhero servitude.

As America prepares to find out who would win in a fight between the world's two most popular men in tights, it appears that Batman has already swooped in and stolen the franchise right out from under Superman. Meanwhile, I'm just waiting for that Matt Bomer Superman movie we were robbed of over a decade ago. Get on it, Hollywood...