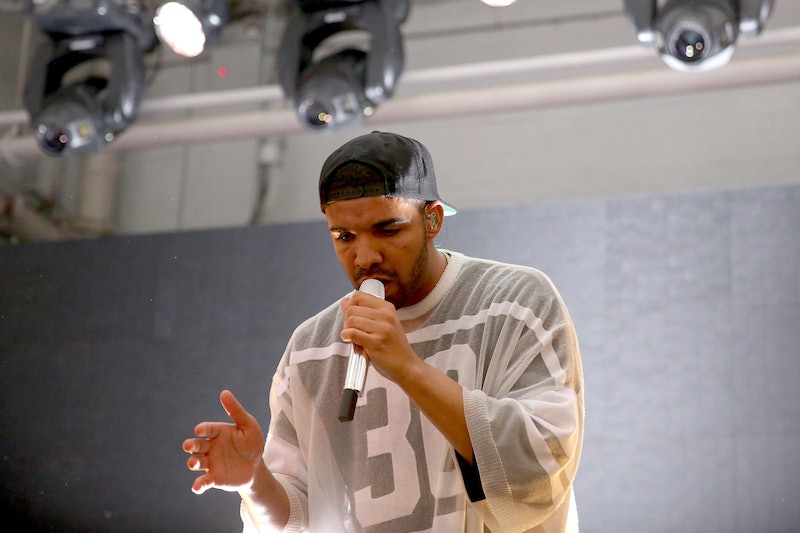 Drake has been busy lately, but when isn't he? Aubrey Drake Graham is one of the hardest working rappers in the business, as he frequently likes to remind us that he stays at home with the curtains drawn furiously working on his legacy. And for someone with such a sched as packed as Drizzy's it makes sense that he doesn’t have time to attend events like the MTV Video Music Awards. But it’s a damn shame because it would have been great to see Drake back at the VMAs on Sunday night, or bobbing his head along to a Taylor Swift song in the audience.

The 28-year-old hasn’t attended the ceremony since he took home the moonman in 2012 for Best Hip Hop Video for “HYFR,” so it wasn’t really likely that he was going to make an appearance this year. But Drake had a lot of reasons to attend this year's show, if not least of all just to show up and prove that he is really living large (probably in some custom OVO Air Jordans). Here are all the reasons Drake should have been at the VMAs, and why we just have to hope that he'll se things differently and attend the show next year:

Drake hasn’t attended the ceremony since he took home the moonman in 2012 for Best Hip Hop Video for “HYFR,” so it wasn’t really likely that he was going to make an appearance this year considering he has no nominations. And Drake didn't decide 2015 was the year to come back to the VMAs, which I'm pretty devastated about — and I'm sure I'm not alone. Here are all the reasons he should have shown up at the Video Music Awards this year:

It Doesn't Matter That He Was Snubbed

Drake is mysteriously absent from the list of nominees for this year's Video Music Awards. But Drake is a big-picture kind of guy; who cares if he didn't get a moonman?

We Wanted To See His Beard

I didn't think that I could love Aubrey Drake Graham any more, and then he grew that beautiful beard. It just really does it for me. It's been blessed. But where was it on Sunday night? Maybe Drake's beard has made him more contemplative?

My heart is so full at even the thought that "Aubrena" is real. I want to believe, and the evidence is all there. Couldn't Drake and Williams just honor our wish fulfillment fantasies and show up at the VMAs together?

He Gave The Best Acceptance Speech In 2012

When Drake accepted the moonman for Best Hip-Hop video for "HYFR" in 2012, he gave a tender speech to all the kids out there that might feel different, since the video celebrated his black and Jewish heritage:

The video, it’s about being me. Being black and Jewish ... I went to this house party one time, and when I showed up there, it was a bunch of kids and I ended up getting made fun of. I want to dedicate this award to any kid that’s ever had a long walk home by yourself. You know what I’m saying? This is to you, man. For real. We made it.

And The Sassiest Shoutout In 2014

Drake won another moonman in 2014 for Best Hip-Hop Video for "Just Hold On We're Going Home," and the buzz was that it wasn't a real hip-hop song. And even though Drake was on tour and wasn't able to attend the show that year, he still so generously took time on one of his tour stops (the day after the VMAs) to give a thank you — and a go to hell. "I know this is a hip-hop award, and I know a lot of you out there are frustrated, like, ’This is not a hip-hop song.’ And you know what? You’re right — I tricked you all. Rappers, better luck next year. Thank you," he said. Drake continues to giggle through the hate.

Nicki Minaj is Drake's ride or die, so since she's performing at the awards — and nominated for quite a few of them, too — he's gotta show up for Nicki when she's making a statement.

He's Had A Great Year

He dropped a mixtape that shook the world. He's (maybe) dating Serena Williams. He's got us all waiting with bated breath for Views From The 6.He played kickball with LeBron James. Is there anything that isn't going Drizzy's way? Why not come to the VMAs and show off how great his game is going, especially to his haters?