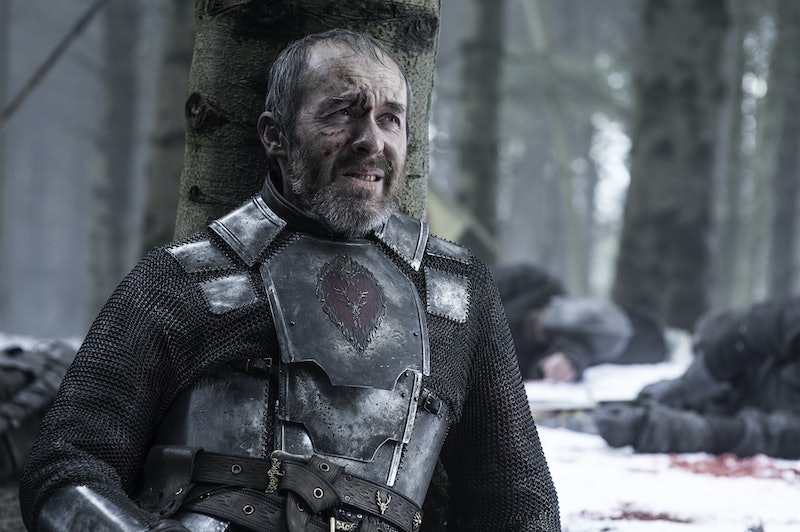 (Warning: this post is full of spoilers!) David Benioff and D.B. Weiss, the showrunners for HBO's Game Of Thrones , are doing their best to keep a tight lid on the secrets surrounding the upcoming sixth season of the fantasy series. Those secrets include the fates of a couple characters ambiguously "killed" in the Season 5 finale: Stannis Baratheon, executed offscreen by a vengeful Brienne, and Jon Snow, murdered by his mutinous Night's Watch brothers. But, while we've received a ton of confirmation that, yes, Jon Snow is dead (hey, that doesn't mean he won't come back!), what about Stannis? Is Stannis is dead?

Well, in case you missed it — at Comic Con in July 2015, Benioff and Weiss came right out and said that Stannis was unequivocally a goner: "From the very beginning, and [through] the script process, that was the intent — he’s dead." But they're also insisting that Jon Snow is equally deceased, even though actor Kit Harington has been spotted in Belfast, where filming for Season 6 is currently underway.

So, it must be frustrating for Benioff and Weiss to have their secrecy possibly blown by none other than the author of the source material himself, George R.R. Martin.

In response to a fan's inquiry in a comment on Martin's LiveJournal asking about the king's fate, the author responded: "In my books? Alive, beyond a doubt." While this information is likely to thrill many a book-reader, exactly what bearing does it have on the fate of Stannis' onscreen counterpart? After all, he wouldn't be the first character to die on the show that was still alive in the books: Stannis' own wife and daughter are now dead in Thrones while still living in Martin's A Song Of Ice And Fire. And, earlier in Season 5, Barristan Selmy was shockingly killed off while the same character on the page becomes a major player at the end of the fifth book, A Dance With Dragons.

So, just because Stannis is still alive in Martin's books doesn't necessarily mean that Benioff and Weiss were lying about the character being dead on their show. But, if they're telling the truth, that will undoubtedly be the biggest departure from the source material to date. While many fans mourned the loss of noble Ser Barristan, he wasn't exactly indispensable; Daenerys still has plenty of people around to advise her — most notably Tyrion Lannister, who arrived in Meereen much earlier than he does in the books.

Stannis, on the other hand, is a king. He's the Prince That Was Promised, according to Melisandre. He's the last remaining participant in the War of the Five Kings. (Joffrey, Renly, and Robb were all slain, and Balon Greyjoy is a walking dead man.) He's also one of Westeros' last, best hopes against the impending invasion of White Walkers. That's a pretty massive gap in Martin's narrative for Benioff and Weiss to fill if they truly have killed him off.

There is one permutation of the situation in which Benioff and Weiss are telling the truth that also reconciles the massive narrative dissonance between the page and the screen: Martin could be the one that's messing with us. To be clear, I don't think the author is straight-up lying; but neither do I think he's above cleverly misleading his readers in order to maintain an element of surprise. At the conclusion of A Dance With Dragons, Jon receives a letter from Ramsay Bolton that he has defeated Stannis in battle and killed the Baratheon king. The readers don't get to see the actual battle, so Martin's recent comment suggests that Ramsay was lying to the Lord Commander.

But, what if he wasn't? What if, when The Winds Of Winter begins, readers actually get to witness the Battle of Winterfell that was only hinted at in ADWD? That would mean Stannis would still be alive when the book began, meaning Martin is technically telling the truth. But, it would also allow the author to surprise readers by dispatching the king early in the novel with a swift and unexpected death, realigning the show with its source material.

Despite Martin's seemingly revelatory comment, Stannis' fate remains as frustratingly ambiguous as ever. Only one thing is certain about Thrones Season 6: Jon Snow is definitely coming back. Don't even try to pretend otherwise, Kit Harington; we see right through your dreamy brown eyes.