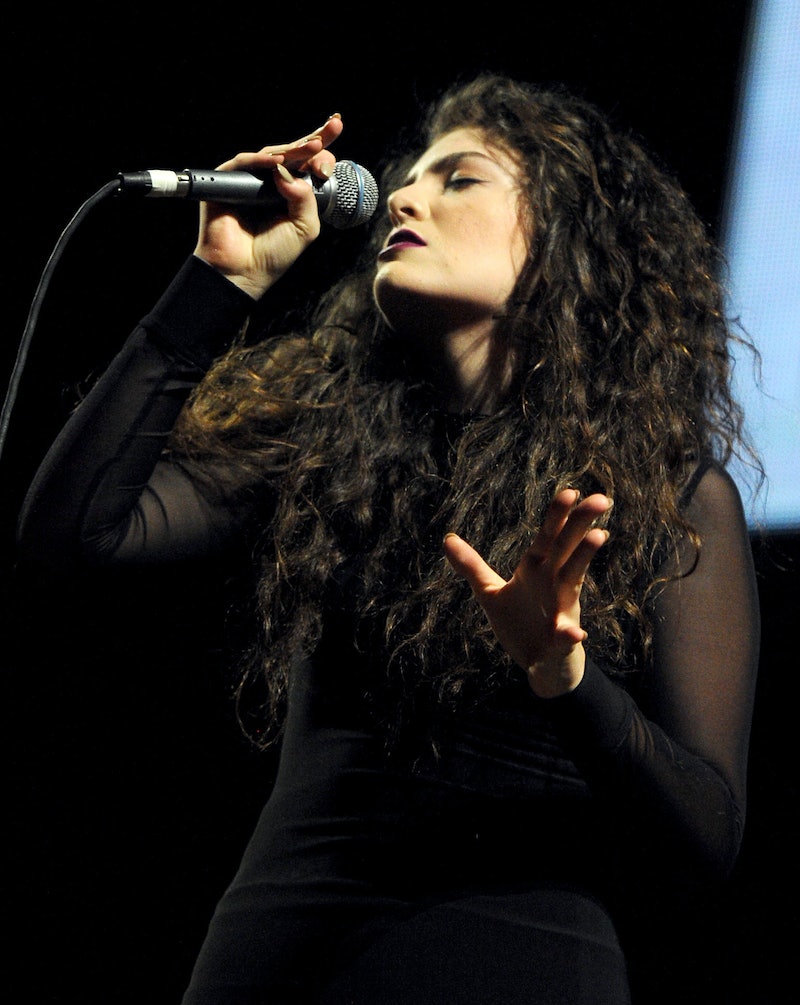 Let's just call it now: today is officially the best day ever, at least where pop music's concerned. This morning, the world was blessed with a surprise Beyonce album, and just a few hours later, Lorde released a new single "No Better" that no one saw coming. Even Britney Spears tried to join in on the fun by announcing an upcoming documentary, but unfortunately for her, Friday was solely about the women with single names: Beyonce and Lorde.

There's much to be said about the former's musical surprise, but it's Lorde's new single that got us most excited. With the release of Pure Heroine, Lorde proved herself to be one of the most talented artists on the scene, and follow-up performances and interviews solidified her as one of the most fascinating, as well. Over the last few months, the 17-year-old New Zealander has voiced her opinions on everything from her feminism to her hopes for the future, and yet has managed to only ignite minor controversy; she's gotten in hot water for comments about Selena Gomez and Kanye West, but mostly, Lorde has stayed trouble-free throughout her quick rise to fame.

Yet this isn't because she's kept a squeaky-clean image; actually, it's the complete opposite. In many of her songs, the teenager has made mention to R-rated subjects like sex and alcohol. In "Glory and Gore": "dropping glasses just to hear them break/you've been drinking like the world was gonna end." In "400 Lux": "we're hollow like the bottles that we drain." And in "No Better," her just-released single: "you’re no better at swimming then you were in the beginning/ but you come over at night and we practice all the breathing."

It doesn't take a genius to figure out what Lorde's implying in those lyrics, and for most pop stars, talking so freely about alcohol and sex would be career suicide. With the exceptions of Rihanna and Miley Cyrus, most of the biggest stars tend to avoid those subjects, at least explicitly; they know that kids and their parents make up a lot of their audiences, and a few thinly-veiled references to sex generally isn't worth the inevitable controversy. It would seem that this would be even more important for Lorde, who is not only a huge star, but a teenager — singing about mature subjects would not only potentially alienate her audiences, but cause an "is she spiraling out of control?" media backlash.

Instead of backing away from these topics, though, Lorde tackles them head on. "No Better" contains pretty mature lyrics — "and your breath’s hot and gross but I kiss you like a lover" — that are bound to get some people wondering what the 17-year-old does in her spare time. Yet despite what one may think, they likely won't cause a controversy, or even get noticed by the majority of Lorde's fans and critics, for one crucial reason — they're well-written.

If Lorde had addressed the topics of alcohol and sex with lyrics like "all we do is party" or "we don't give a fuck what people think," there's no doubt she'd be the subject of major criticism. A 17-year-old talking about drugs and sex? She must be going wild! Yet because Lorde chooses to write about them so eloquently, their effects are lessened. The lyrics are seen as art, not depictions of what Lorde's teenage life is really like. Perhaps she does drink alcohol and hook up, like so many others her age, but her lyrics are so gorgeously crafted that it's almost irrelevant. Because Lorde handles mature topics with class, she's able to get away with much more than most of her contemporaries.

This is a huge strength, and it's one that gives Lorde an advantage most others her age — or even older than her — don't have. Because she's such a talented writer, she can write about the topics that truly affect her, not just what audiences want to hear, and not have to worry about inciting controversy. As long as she continues to write her lyrics as eloquently as she does now, Lorde can practically get away with anything; it's a valuable asset, and something that's bound to help quicken the path to the kind of songwriting superstardom that she's already on the way to achieving.

Listen to "No Better" below:

More like this
Why The '365 Days' Sex Scenes Are Good, Even If The Movies Aren’t
By Arya Roshanian
Watch The Dramatic First Trailer For Netflix's Jennifer Lopez Documentary
By Alyssa Lapid
Lisa Marie Presley Reviewed Baz Luhrmann’s ‘Elvis’ Movie On Twitter
By Grace Wehniainen
'Dirty Dancing's Jennifer Grey Wants Harry Styles To Be The Sequel’s Love Interest
By Grace Wehniainen
Get Even More From Bustle — Sign Up For The Newsletter