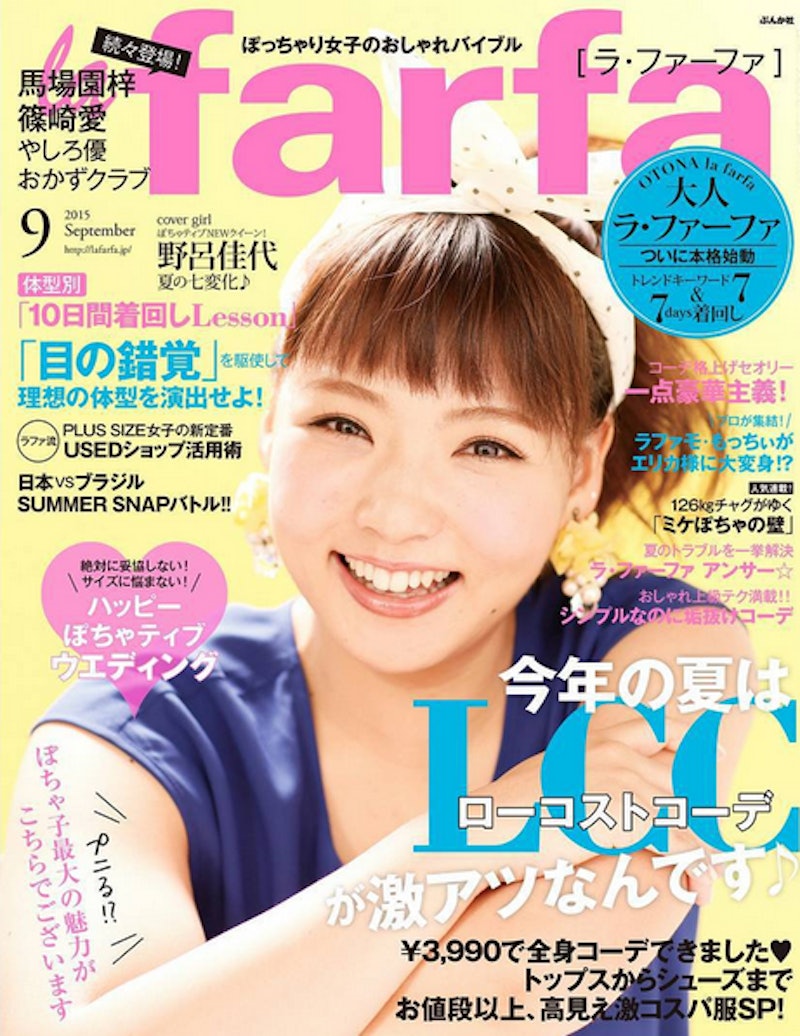 Back in April, the world was introduced to Japan's first magazine for plus size women: La Farfa . In the time since, the publication has not only been groundbreaking in the realms of Japanese culture, but for Western folks, too. The magazine doesn't just use plus size models, but entirely focuses on plus size women and their sartorial needs, as well as celebrating and normalizing the plus size figure along the way. Plus size clothing is hard enough to come by for Japanese women — considering most stores only stock "one size" — but with the rise in popularity of brands like Punyus, it would seem the world of body positivity in Japan is changing, and arguably for the better.

Considering La Farfa sells out with each run, it seems the world is responding brilliantly. The first issue sold out of its initial 50,000 print run and went on to sell a further 100,000 copies. With the popularity of a magazine like this, it baffles me that something similar hasn't made its way to the States or any other Western countries. Although plus size magazines certainly exist here, they arguably haven't been met with the enthusiasm that La Farfa seems to excite with its fun and fresh spreads and features.

If we can't get our own version of La Farfa here, let's hope that our magazines will at least take a leaf out of its book and start representing plus size bodies with the same kind of joy. Here are just five lessons Western publications could learn from this gem of a magazine.

1. Have A Fashion Show With Real Life Readers Modeling

For the magazine's first fashion show, real life readers of La Farfa were put onto the catwalk rather than professional models (who often create their own set of debates when it comes to plus size beauty standards). By using non-models, La Farfa offered the kind of varied representation women need to see more of in this industry.

“We don't promote losing weight or gaining weight, because there are women that look gorgeous regardless of what they weigh,” Harumi Kon, Editor in Chief of La Farfa, told The Japan Times. “Our view is that people should not be defined by the size of the clothes they wear.” We need more publications that so fully embrace the notion of loving your body just as it is now.

3. Calling Plus Size Models "Marshmallow Girls" Instead Of "Debu" (Which Means "Fatty")

Although many have critiqued the term "marshmallow girl," the models who use the phrase absolutely adore it. Using terms that aren't coated in stigma — or reclaiming those that are — can be hugely empowering when learning to see beauty in things you previous felt shame towards.

4. It's Not Trying To Hide Fat Bodies

Rather than covering up the plus size models with coats or wrap dresses, La Farfa truly embraces fat bodies with lingerie and bikini editorials. “In a conventional fashion magazine you’ll never see a roll of fat extending over the waistband,” Kon told The Japan Times. “Our readers appreciate that sort of thing.”

While publications like Plus Model Magazine , SKORCH , and Volup2 do wonders for plus size visibility in the Western world, here's hoping for something as radical, kitsch, cutesy, and fun as La Farfa.