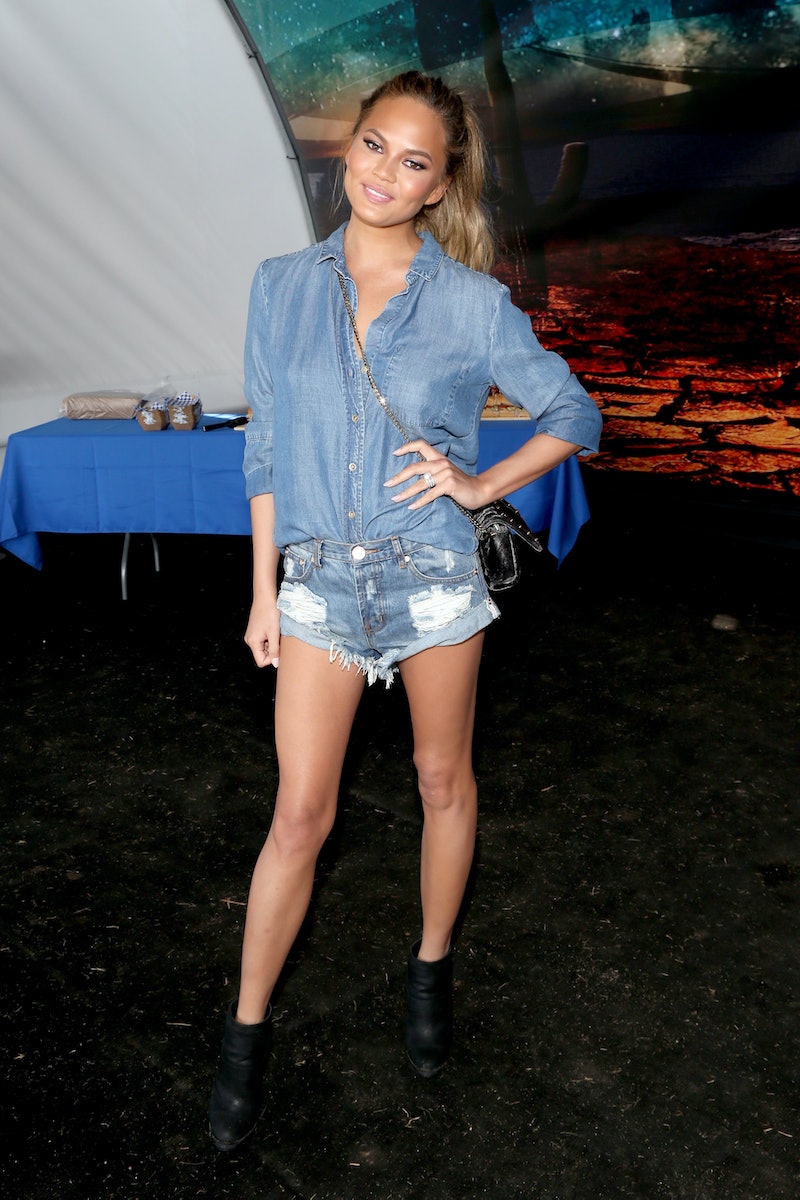 Many have argued that Chrissy Teigen, part-Sports Illustrated model, part-incredible home chef, can't be a figure of body positivity. Even a critical analysis of her body positive social media updates don't seem convincing enough to some. Allow me to make it simple and show you 13 times Chrissy Teigen was a body positive role model on Instagram. And no, I'm not just talking about the one photo she posted of her stretch marks or her naked cover photo from the September issue of UK Women's Health . I get that we've probably all seen and read the body positive messages behind those posts, but I feel like what makes Teigen a real advocate of body positivity isn't her willingness to be vulnerable in those select moments, but rather by simply being real with her fans all the time.

If you follow her media coverage, chances are you know how genuinely she answers questions in interviews. Just last month, Teigen told Mashable, "I'd die for hips. I want to have this womanly, feminine body." Some might interpret this comment as being anti-body-positive because she's showing dissatisfaction with her body. However she continues to tell Mashable, "I think it's extra important right now to show a woman not wholly retouched...It's not normal. I think it's our responsibility as women to show our flaws and how we're far from perfect." Can we just all just take a moment to appreciate the honestly and the realness behind Mrs. Legend's transparency?

Being body positive doesn't only entail rejecting a single, narrowly-defined interpretation of beauty. It has another layer of significance — a sense of willingness to be vulnerable with our insecurities. I feel like acknowledging imperfections is a huge factor of body positivity and seeing that Teigen isn't afraid to do exactly that is what makes her an amazing body positive figure to follow.

I could sit here all day long, critically analyzing what she's said in her interviews or what she's tweeted about her body in the past month, but let's just make it simple. Here are 13 times Chrissy Teigen was a body positive role model on Instagram.

1. When she posted a photo of her in a messy bun and no makeup.

2. When she went to Dallas and ate everything she wanted.

Because when you're exploring a new city, it's only natural to try everything.

3. The fact that her workout socks are donuts.

Showing body positivity for a fit and healthy life through some real motivation. Can't get any realer than donut motivation.

4. What she took with her when she traveled to New York.

It's not your typical photo of the glamorous jet setting life of a celeb. Teigen makes sure her fans know she's only human and has dry skin, too.

5. When someone described her body as a post-pregnancy bod.

And she genuinely found it hilarious.

6. How she isn't afraid to show the behind-the-scenes of her glam looks.

She told New York Magazine , "Even on television I am full of fake hair and covered in body makeup head-to-toe. Those full lashes have been applied meticulously one by one, my teeth have spent more hours in a dentist chair than I ever imagined. We have a team of people whose sole job is to make people appear close-to-perfect."

7. When she thanked her modeling agency for telling her not to change a thing.

She embraces her flaws.

And she'll look fab doing it.

9. When she shares selfies of her with a moisturizing mask on.

10. She's super real when it comes to healthy eating.

11. When she shares the very real process of getting ready for events.

It takes a lot to reveal that you aren't perfect and here Teigen does it with humor. Love.

13. When she looked adorable with a double chin.

Seriously, how can anyone dislike her genuineness?!