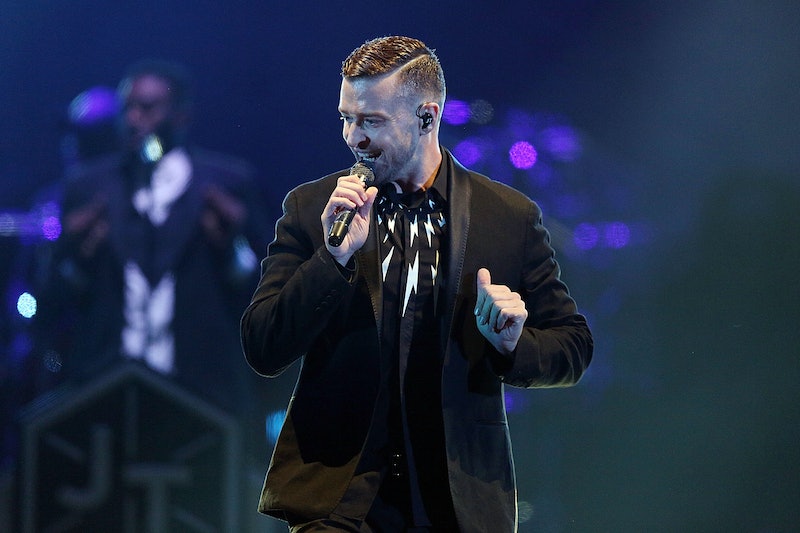 Get ready for news that is truly out of this world, Justin Timberlake fans. After taking a hiatus from movie stardom to regain his status as a pop music icon, the "Suit & Tie" singer is marrying his love of music and the big screen for a cinematic piece that is poised to bring sexy back, front, to the side, and anywhere else said sexiness can go. According to a Sunday, Aug. 29 report from Entertainment Weekly, "[Timberlake] enlisted director Jonathan Demme...to film the final date on the 20/20 tour at Las Vegas' MGM Grand Garden Arena." The report goes on to note the Oscar-winning director's "barely contained enthusiasm" over the yet-to-be-titled film when Demme stated, "It's a space age music film!"

As an avid fan of Timberlake since his *NSYNC days, I have long been privy to the fact that the singer-turned-actor-turned-singer-again has a range of talent that extends beyond our outer limits. And these talents include anything space-related. Need proof?

That's right, I'm taking it back to the year 1998 when *NSYNC released their space-themed music video for "I Want You Back" — and Timberlake debuted that glorious blue shirt. This was the first piece of evidence many fans were given to show that Timberlake was the ultimate triple threat. He could sing, dance, and that amount of cheese-tastic grinning definitely required some acting skills. Moreover, the random — yet beautiful — backdrop of a rocket ship proved that the best age for Timberlake to reside in is the space age. Let's take a look back at this masterpiece, shall we?

1. This Look Of Pure Anguish

Where is this man's Academy Award hiding?

This GIF may be more hypnotic than a lava lamp.

3. This Instance Of Tunnel Vision

The woman from the skype date continually looks distressed as she de-materializes and re-materializes. Meanwhile, our boys from *NSYNC are too busy busting moves to notice.

I'm not being facetious when I say that I plan on printing this out and hanging it on my wall.

7. When The Spaceship Kind Of Seems Like An Airport

Am I the only one that feels like — if you panned down — you would see all the *NSYNC members are actually walking on an airport treadmill? Perhaps this video wasn't so intergalactic after all. Either way, it's glorious.