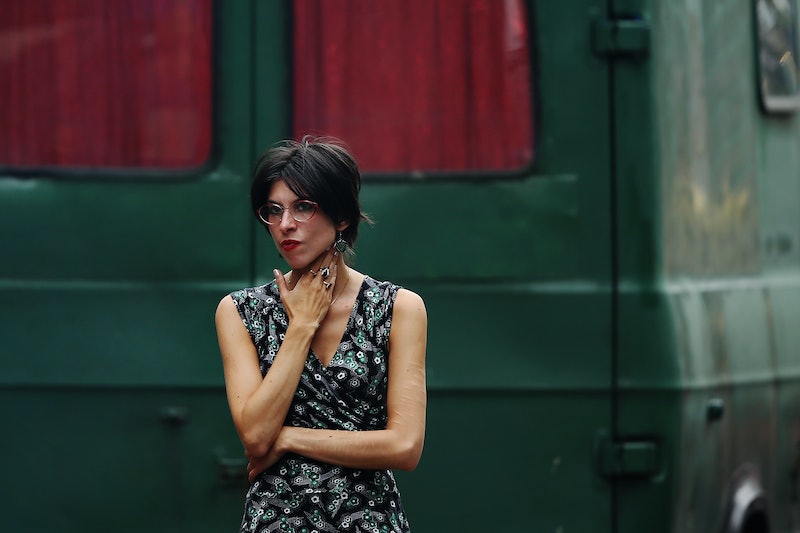 Pretenders singer Chrissie Hynde has been facing a firestorm of backlash following comments Hydne made about rape victims during an interview with Sunday Times magazine — and the anger about said comments is, in my opinion, totally justified. The musician, 63, placed blame on herself — and goes on to criticize other rape victims for their assaults — for an incident that occurred at the age of 21, where Hynde was sexually assaulted by a member of a motorcycle gang in Ohio. "You can't f**k about with people, especially people who wear 'I Heart Rape' and 'On Your Knees' badges," she said. "Those motorcycle gangs, that’s what they do."

Yet while Hynde placing the blame on herself may strike many simply as sad, not worthy of criticism, she then went on to state that victims of rape should "take responsibility" when they put themselves in situations or dress in ways that would "entice" a rapist. "Who else's fault can it be?" she said. "If I'm walking around, and I'm very modestly dressed and I'm keeping to myself, and someone attacks me, then I'd say that's his fault. But if I'm being very lairy and putting it about and being provocative, then you are enticing someone who’s already unhinged — don't do that. Come on! That’s just common sense."

As you might expect, many people have spoken out in anger about Hynde's comments, while many others have just expressed sadness that she apparently blames herself for something that was entirely not her doing. Hynde is claiming that there are instances where the holder of fault in sexual assault is not exclusively on the perpetrator, and this sentiment is indisputably untrue. No amount of naivety, lack of clothing, or absolutely anything else imaginable can place the smallest thread of responsibility on victims of rape. And there is no such thing as asking for it. Let me state that again: There is no such thing as asking for it.

Victims of sexual assault suffer a myriad of consequences that can be completely debilitating. Being forced into something so intimate that should only be marked by choice can color the world in a frightening way even years after a sexual assault has taken place. According to RAINN, rape can result in the devastating condition known as Post-Traumatic Stress Disorder (PTSD). The disorder can cause victims to re-experience the event in the form of flashbacks, where the assault feels as if it is happening all over again. Hypervigilance can also commonly occur, along with "avoidance," where one may alter their lifestyle or withdraw from society out of fear, and to avoid being assaulted again.

This amalgamation of stress, depression, and anxiety is something no one deserves — and certainly would never ask for. Victim blaming isn't simply something that is deplorable (which it most definitely is), but it is also something that can trigger symptoms of PTSD in those who were assaulted, as well as prevent victims from coming forward after the rape has occurred.

According to The National Crime Victimization Survey, 188,380 cases of assault and rape were accounted for in the year of 2010. Of those cases, only 85,593 were reported to the FBI. The self-blame and guilt experienced by victims of rape — despite being completely erroneous — is one of the factors that lead so many to suffer in silence.

Hynde isn't simply positing her opinions privately among friends or family. As a public figure, she doesn't simply have a voice — she has a megaphone. Her words have the potential to trigger issues being experienced by victims of sexual assault, which is why — as someone who seems to put a lot of stock in "responsibility" — she should have been more responsible when her words were being put on the record. By the same token, it is saddening that Hynde has placed any blame on herself for such a horrendous experience that she never deserved, or had any fault in.

The issue of victim blaming continues to permeate our culture in a truly detrimental way. Clearly, this is a topic that demands much more national discussion. Moreover, misplaced blame needs to stop intercepting our discussions in order for us to lend support to victims, and prevent these terrible acts from occurring.