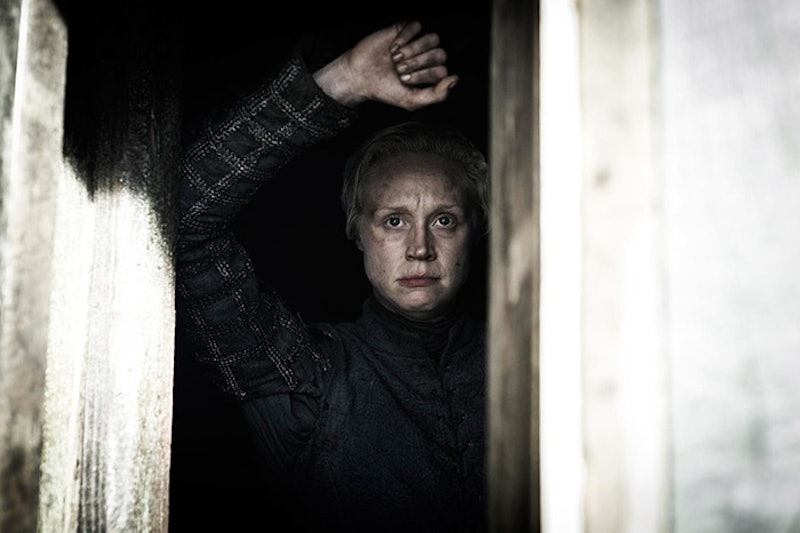 I don't mean to be a zombie tease, but Lady Stoneheart could be in Game of Thrones Season 6. I know, I know, you've heard this tale before, but there is far more evidence that the vengeful undead Lady Stark could show up in Season 6 than there has been for any previous season since her demise at the Red Wedding. For the uninitiated (which, guys, here be a whole lot of spoilers), Lady Stoneheart is the reanimated corpse of Catelyn Stark. At the end of the third book, A Song of Swords, Beric Dondarrion gives Lady Stoneheart the kiss of life at his own expense, and Lady Stoneheart takes over the leadership role of The Brotherhood Without Banners.

A recent Vanity Fair article discusses the increased role Brienne of Tarth is said to have in Season 6, and why this news points to the first appearance of Lady Stoneheart. Many book readers and fans of the HBO series alike have been unhappy with Brienne's lack of a strong storyline in Seasons 4 and 5. After a blockbuster — and might I add, largely faithful to the books — journey in Season 3, Brienne has spent the rest of her Thrones time wandering aimlessly in search of the Stark girls. When she found Arya, she got into a monster fight that resulted in the (possibly greatly exaggerated) death of The Hound, and at the end of Season 5, Brienne offed Stannis in the name of Renly. In between, this amazing character has been doing a whole lot of nada, and even her portrayer, Gwendoline Christie, is getting sick of staring at a window.

At this point, the only way to get Brienne's story back on track is to introduce Lady Stoneheart and have Brienne face the woman whose daughters she has failed to save. The fourth book sends Brienne on a dark journey through the Riverlands that culminates in a meeting with Lady Stoneheart and an impossible choice that puts Brienne back into Jaime's orbit. It's thrilling, emotional, and meaty material that would really only require a short return visit from Michelle Fairley (Lady Catelyn) to set into motion.

Season 6 casting notices seem to suggest Game of Thrones is preparing to introduce Lady Stoneheart in some form. Watchers On The Wall reports a casting call has went out for a group of outlaws that sound suspiciously like a revamped version of The Brotherhood Without Banners. Add in the short-term addition of a Frey, who appears to be destined to die, and it certainly sounds like someone is seeking justice for the Starks in The Riverlands. Since Robb lost his head, the only plausible explanation is that Lady Stoneheart is coming.

Fairley told the Telegraph in July that she is "not under contract with Game of Thrones," meant to imply that she's not scheduled to re-appear. She wouldn't have to be under contract for a short-term appearance, though. Lady Stoneheart is not a character that needs to be seen in more than one or two episodes this season to leave a lasting effect. Her purpose in the book's story so far has largely been to push Brienne's story forward, and Brienne desperately needs that push on the show.

It is worth noting that Jaime's storyline has stalled, as well. Brienne's encounter with Lady Stoneheart would send her on a quest to find Jaime, a man both the books and the show have made it clear she loves. Reuniting these two in a story that is sure to be heartbreaking and enthralling (and offer up juicy fight scenes) is just what Game of Thrones Season 6 needs.

And if the need to move Brienne's story forward leads to the show finally introducing Lady Stoneheart in all of her horrifying glory, then everyone wins. The stalling has gone on long enough — it's time for Lady Stoneheart to serve up some cold hard justice and for Brienne to be given the strong story she deserves. Are you ready, fans? Lady Stoneheart might finally, at long last be a go.