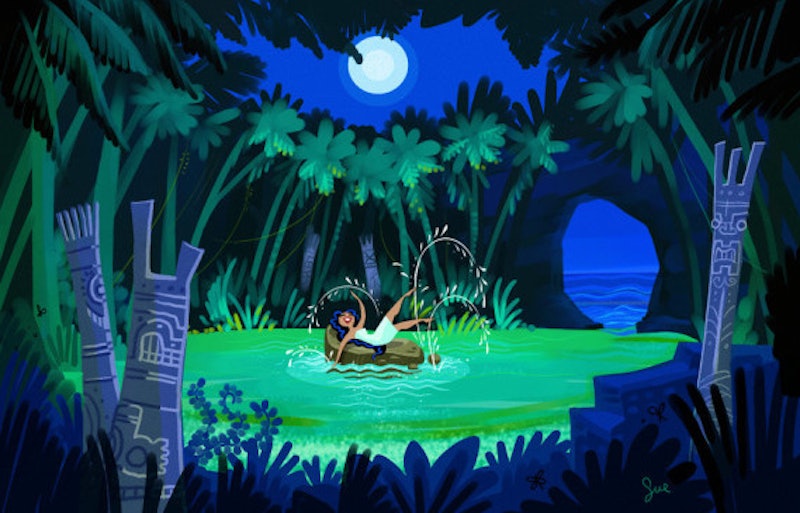 There's been a lot of discussion lately over issues of representation in the Disney brand. This is especially relevant given the smash success of Frozen , a film who's overwhelming whiteness we've already discussed here previously. Well Disney's got a princess of color coming our way: The first glimpse of concept art for Moana was just released, and she harkens back to the best of Disney's past while also (hopefully) beckoning in some solutions to the problems that have plagued past projects.

Moana is named after the film's main character, Moana Waialiki — pronounced Mwa na (i.e. more un a), or Mo-ah-nah, depending*. Here's the little bit we know about her so far:

The main character will be Moana Waialiki, a sea voyaging enthusiast, and the only daughter of a chief in a long line of navigators. When her family needs her help, she sets off on an epic journey. The film will also include demi-gods and spirits taken from real mythology.

So really, she sounds a little bit like Brave's Merida and Pocahontas. Sadly we will not see her movie until 2018 because Disney's got a lot of things previously lined up before then.

Still, Moana — the character and the film — looks promising, especially given that Bleeding Cool, in their coverage of a Disney tease a few months ago, mentioned that the film is "being developed in a new style of CG that’s somewhat like but certainly not identical to the techniques used on Paperman."

Considering how beloved Paperman is, that's a good sign. That same tease called the film “fresh and original, not a fairytale movie." Plus it's got a woman of color in the lead and title role. If they'd only add an LGBT character it would be our dream Disney movie.

According to Bleeding Cool, who first got the scoop, this one's a "an epic, or even mythic, adventure set around 2000 years ago and across a series of islands in the South Pacific." So as long as long as Disney can manage to pay homage to Polynesian culture without mangling it, this one looks like a good one, folks.

*We have received email tips correcting us on both pronunciations, so we've now edited this post to include both. It appears to depend on region; if you know more about this and which pronunciation Disney specifically is going with, let us know.