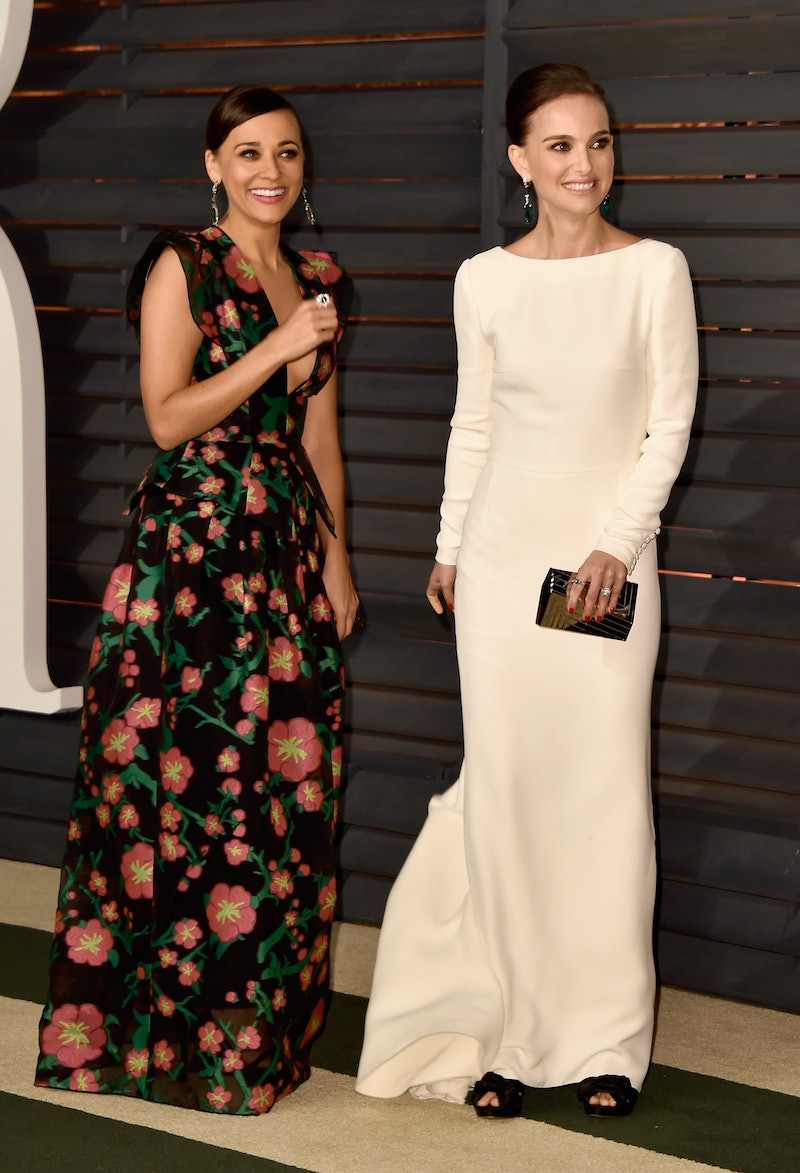 I've always thought of celebrities as a rare breed of animal that can hear frequencies that are imperceptible to the rest of mankind. They inhabit a world where absolutely baffling occurrences — like having your photo taken every five seconds or watching as random women or men fall at your feet without knowing a single thing about you — are just part of daily living. It would make sense that all celebs — musicians, actors, models, and even reality show stars — find themselves drawn to one another like flies to honey. And while there are plenty of celebs who seem (from the outside) like they'd totally gel but don't (Katy Perry and Taylor Swift, I'm looking at you), there are also many celeb friendship pairs that are pretty surprising.

Over the years, celebs like Swift continue to surprise us by being spotted out and about with other celebs who are either their dream BFF's — the kind that make you think, of course, these two belong together — or seem like their polar opposites. Either way, it's always fun to find out two famous folks are joining forces to dodge paparazzi together, all so they can split a pizza — or a VIP booth and 20 bottles of Grey Goose — in privacy.

Here are nine celeb friendships that will surprise you.

You're not the only one who can't wrap your mind around this most awesome of friendships. Apparently, Tay Tay is "old friends" with rapper Nelly and recently brought him on stage when she stopped in his hometown of St. Louis so the two could sing "Hot in Herre" together. Bananas.

Nelly told Rolling Stone the two met through a mutual friend she works with named Robert and he considers her a sibling of sorts: "And then I met Taylor and her father and her mother, and they're just some cool people," he said. "She's like a little sister, man, she straight. I've been knowing her ever since she's been on. She calls me whenever, it don't matter, I'll knock it out for her."

There is nothing unusual or odd about Lena Dunham and Mindy Kaling's friendship — it does, however, restore my faith that the world is a perfectly logical place where two hilarious and talented young women with fantastic TV shows would choose to hang with each other and not feel the need to compete. When Kaling turned 36, Dunham made her birthday wish come true by gifting her with a pink "Lena Planned Parenthood" t-shirt and Paul Frank pants. Clearly, they are simpatico on lots of issues.

Jessica Alba and Reese Witherspoon run two very different lifestyle companies, but they share enough in common to make theirs seem like a friendship made in heaven. As the founder of The Honest Company, mom and actress Alba is dedicated to offering parents alternative, natural baby products, while mom and actress Witherspoon's Draper James honors her southern background by selling home gifts, jewelry, and clothing fit for a southern belle. Alba told Vanity Fair she thought it was "unfair" for Witherspoon, Blake Lively, Gwyneth Paltrow, and her businesses to be lumped together simply because they're all actresses. Witherspoon seems to agree completely and was quick to give her friend's company a kind shout-out.

As actresses who are known for choosing interesting roles that rely on their talent and not their sexuality, Dakota Fanning and Kristen Stewart seem like they'd be great friends. After working together on The Runaways and Twilight, they were spotted all over the place, from fashion shows to parties. While some speculated that Fanning was being disrespectful to Stewart by hanging out with Robert Pattinson and FKA Twigs, sources were quick to debunk that myth to Just Jared and insist that the two friends are still on great terms.

They're both funny, talented, and intelligent Ivy-League graduates (Harvard for both). They seem like they'd be great friends on paper, and as it turns out, that's exactly what they are in real life. They've collaborated on several Funny Or Die videos, and when it came time for Jones to shoot a lesbian love scene with Zooey Deschanel in Our Idiot Brother, The Office actress turned to Portman for advice (remember Black Swan?). "I'm friends with Natalie and I asked her [what to expect]," Jones told Access Hollywood. "She was like, 'Dude, it's awkward to make out with your friends — I'm just warning you right now. It's super awkward!'"

Dobrev and Hough have their beautiful heads of hair (and hairdresser) to thank for bringing them together. Hough revealed to E! Online that she and the Vampire Diaries actress are as thick as thieves, thanks to an introduction by their mutual fiend. "We've known the same person, Riawna Capri, who cuts and colors and does our hair," Hough said. "She's like, 'You guys have to meet.' We've just been like joined — connected at the hip."

Jennifer Garner and Jessica Biel met on the set of Valentine's Day and became fast friends, according to Marie Claire. And you know their connection is the real deal and that they are 100 percent comfortable with one another because, when asked about their husbands, Justin Timberlake and Ben Affleck (sniff, he and Garner were still married at the time) during their Marie Claire interview, Garner quipped: "Yeah, from time to time we talk about swapping."

Zach Braff and Harry Styles adore one another. They take each other out on candlelit dinner dates. Styles traveled to the Sundance Film Festival to support his friend's film, Wish I Was Here, and Braff returned the favor by raving about the One Direction singer's superior spooning skills. When he appeared on Watch What Happens Live, Braff admitted his entire life has changed since meeting Styles — mainly because their friendship is all they get asked about now:

The world may never know how they clicked and why they work so well together, but isn't it enough to know this is happening, probably right at this very moment as you read this?

It's nice to know that, in a cutthroat industry, celebs are finding allies — whether they're completely logical connections or totally random ones that are even more awesome.