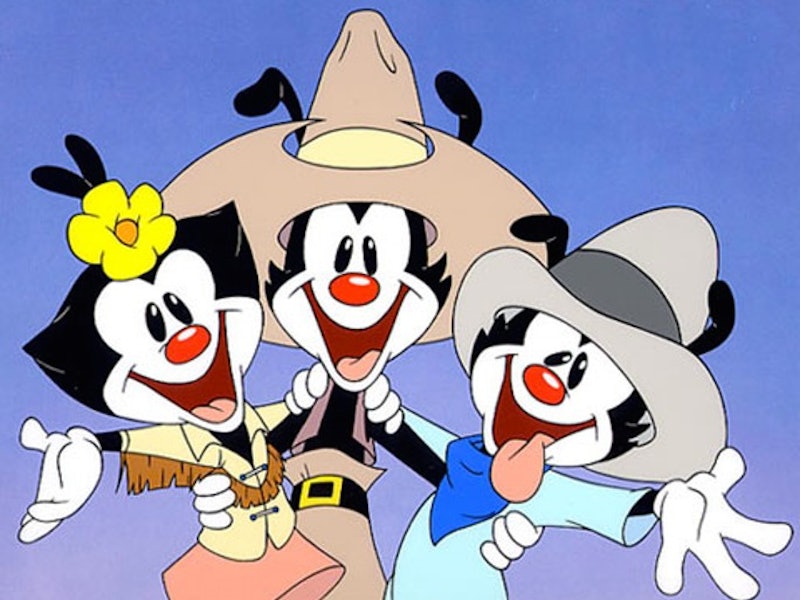 Everybody stop what you're doing, because it's time to look back at childhood programs of yesteryear in horror. As a child, I remember being an avid fan of the '90s cartoon Animaniacs. The series featured an ensemble of delightfully irreverent cartoons who were prone to hijinks, absurdly off-the-wall scenarios, and — yes — tons of sexual innuendo. As a tot, I was apparently too busy chowing on my Gushers (that snack food is an innuendo all on its own — amiright?) and being enveloped by glorious naivety to catch on to any of the borderline NSFW jokes peppered throughout each episode.

Inserting adult humor into childhood programs is old hat for cartoonists (hi, penis castle on the cover of The Little Mermaid ), but there was nary a program where that was as painstakingly obvious as Animaniacs. As an adult, taking a look back at this series is likely to cause some slackened jaws and exclamations of, "How the eff was I allowed to watch this?!" Seriously, Mom, you banned me and my sister from watching Beavis and Butt-head, but Animaniacs was totally copacetic? Now I understand why each time my parents laughed at this show during a seemingly random moment and I asked "Why?" their usual mantra was, "We'll tell you when you're older."

Well, I'm officially "older" (I turn 30 soon — OMFG), and so are you. In celebration of adulthood — and seeing every cartoon in a brand new light — let's take a look at 11 dirty jokes from Animaniacs that totally went over your head.

1. Fingerprints... Or, Prince, Rather

Clad in a detective getup, Yakko directs Dot to "dust for prints." Misunderstanding the direction, Dot returns carrying the singer, Prince. "I found Prince!" she exclaims. Yakko replies, "No, no, no, fingerprints." Hearing the words "finger" followed by "prints" catalyzes one of the most leery grins an animated version of Prince could offer, leading Dot to chucking him out a window.

Clearly Yakko needed a lesson on the difference between the words "conjugate" and "consummate." Wow.

Seriously, how did this ever make it onto television? I can't even.

Despite his initial outrage, Yakko follows up the above sentiment with an emphatic, "We'll do it!" Is it just me, or was Yakko the main instigator when it came to ruining our childhoods? My mind is exploding.

There was a lot of that going on.

Don't worry, Dot jumped in at the end of this scene to pack these cads up in a briefcase before things got even creepier.

Come to think of it, pretty much every "hello nurse" moment was decidedly sketch.

8. Asking To "Watch The Adult Channel"

When Dot, Yakko, and Wakko think — for whatever reason — that Death is their new father, they ask if they can stay up late enough to "watch the adult channel." Yeah, during my retrospection on this animated classic, I'm starting to think this show actually belonged on "the adult channel."

Seriously, how did all this stuff go over my head?? Oh, right, childhood innocence.

10. When The Teacher Asked Dot, Yakko, & Wakko To "Find Their Seats"

This was their response. I can't...

Cue the inappropriately sexy music to close out this scene.

I officially can never un-see any of this. Time to go re-watch The Land Before Time and hope to everything that there isn't a hidden scene where Little Foot gets motorboated by Cera or something. Yikes.