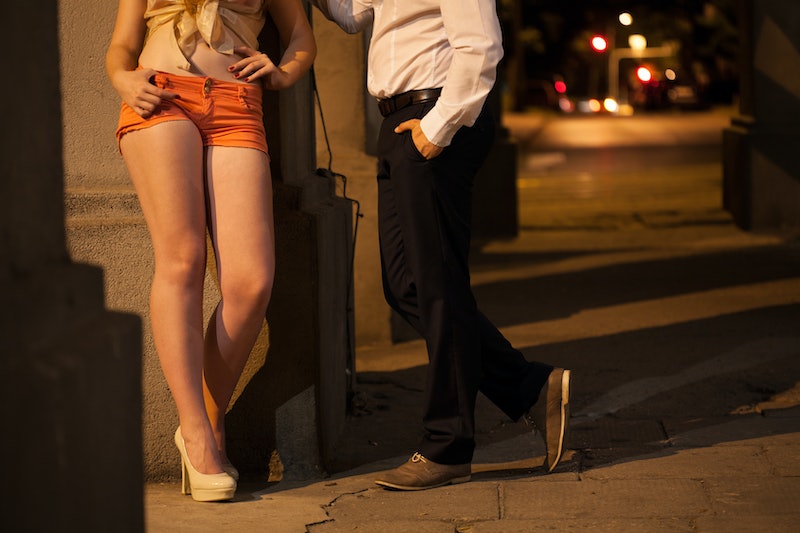 A new study has found that men who buy sex are very different from men who do not. According to the research published in the Journal of Interpersonal Violence, the majority of men who resort to prostitutes as a means to have sex, in many cases, also have a dark past of sexual assault against women. For them, women who prostitute themselves are not women at all, but just objects.

The study by UCLA professor Neil Malamuth examined 101 Boston area men who buy sex and 101 Boston area men who don’t. What he found was that his 35 years worth of research had been confirmed: Men who pay for sex are a different breed unto themselves, and not a good breed either. For example, one participant even compared his transaction with a prostitute as getting rid of a cup after finishing the coffee in it saying, “When you’re done, you throw it out.” He was not alone in his virtual disgust for these women, despite the study having found that the majority of these men were “relatively knowledgeable” about not just prostitution, but sex trafficking and coercion.

According to the lead author of the study and executive director of Prostitution Research and Education, Dr. Melissa Farley, she hopes that these findings will prove that those who buy sex aren’t just “frustrated nice guys,” but in many ways predators. In other words, the criminals in these equations are the johns.

Here are eight other scary truths about men who buy sex.

1. Men Who Buy Sex Are More Likely To Have Committed Rape

As the study found, not only do men who turn to prostitutes for sex have zero empathy for them and their circumstances, but they’re more likely to have committed rape or other “aggressive sexual acts” against women.

Men who are most likely to buy sex struggle with the fear of being rejected by women on a regular basis. It’s in this fear that a “hostile masculine self-identification” is born, which contributes to their violent ways and hatred toward all women, not just prostitutes.

According to the study, men who choose to use sex workers “view them as intrinsically different from other women.” As the man who compared a prostitute to an empty cup of coffee, these men see something that is less of a person who doesn’t fall into their concept of what a woman is.

4. Men Who Buy Sex Are Usually Narcissistic And Antisocial

As the research found, men who buy sex have certain identifying personality traits in addition to being violent. For starters, their fear of rejection keeps them very antisocial and preferring impersonal sex. Secondly, the majority of men who buy sex are severe narcissists, so they feel like sex is owed to them.

5. Men Who Buy Sex Are More Prone To Risky Behavior

According to research done by sociologist Martin Monto at the University of Portland, some men like prostitutes because of the “exciting” risk factor. The fact that it’s “wrong,” and illegal in many places adds to the appeal.

Well, as much as I think being sexually liberated is a great thing, I think in this case, it’s not something to brag about. However, as Monto found in his study, johns are far more sexually liberal than men who would opt out of the chance to be with a prostitute.

7. The Majority Of Men Who Pay For Sex Know Just How Awful It Can Be

While there may be a difference in conditions between a call girl who gets $1,000 an hour compared to a woman getting $50 on the street, the point is they’re both selling their body and some may not be doing so by choice. According to research by Dr. Farley, 66 percent of those who buy sex have actually acknowledged that some of these women have been tricked, lured, or trafficked into prostitution and 41 percent paid for sex knowing full well that a pimp was controlling the prostitute.

8. Men Who Are Arrested For Buying Sex Are More Likely To Kick Their Habit

According to a 2006 study, men who were caught in the act of buying sex are more likely to stay away from prostitutes than men who don’t get caught. In fact, the research found that a single arrest reduced the likelihood that a man would continue to use prostitutes by 70 percent.

Another study by Dr. Farley found that 89 percent of men said they’d give up going to prostitutes all together if their name was added to a sex offender registry, 90 percent said they’d give it up if they were forced to pay a financial penalty between $1K to $2K, and 100 percent of men who pay for sex said they’d definitely be far less likely to frequent prostitutes if a mandatory one-month jail stint was imposed after arrest.