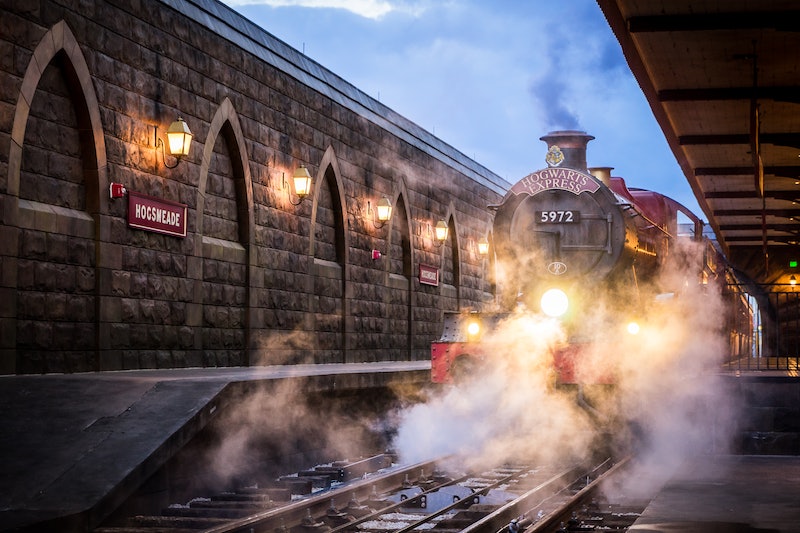 As you’ve probably heard by now, September 1 marked the first day at Hogwarts for James S. Potter, the eldest son of Harry Potter and Ginny Weasley. Series author J.K. Rowling pointed it out on Twitter, in case fans hadn’t already noted the day. Naturally, there were a lot of emotions flying around after her tweet from those who thought it was adorable, but others, like me, grimaced. Although it was nice to have a dash of Harry Potter added to my day, it messed with my usual M.O., which is pretending that the epilogue to Harry Potter and the Deathly Hallows doesn’t exist.

As much as I love J.K. Rowling — both for bringing the joy that is her fantastic book series into the world and for routinely being amazing and inspirational — the epilogue is six pages (in my hardback copy) that I wish had never happened. Of all of the many ways Rowling considered ending Harry Potter, it is one of the last that I’d have chosen. I respect that she’s the author and that it was her call, but I can’t help but wish she’d stopped before time-hopping with her characters.

The Epilogue Wrapped Up Everything Too Neatly

At one time, I was the same age as Harry as I read the books. By the time Deathly Hallows came out, though, I had out-aged him and was in college. Perhaps I just got too old or jaded for the epilogue and have to remember that it’s a children’s series, however enjoyable for adults. A happy ending is fitting, after all, especially after all that the characters had suffered. Nonetheless, to me personally, marrying everyone off, giving them their 2.5 children, and saying “all was well” wasn’t as satisfying as it could have been.

Little Was Left To Our Imaginations… Or Rowling’s

The happily ever after that the surviving characters got didn’t leave much room for us readers to imagine their fates. Harry Potter had been hailed as a series that got people reading, so it seems a shame to me that the epilogue didn’t encourage us to exercise our own creativity. Rowling might not have filled in all of the blanks, but she did many of them.

On top of that, Rowling may have limited her options for a sequel. She has said that she’s open to writing more Potter books, but by tying things off so neatly in the epilogue, certain roads can no longer be taken. Sure, there are tons of possibilities for Harry Potter spin-offs and prequels still, but someday she may wish she had left herself more flexibility.

Everyone Seemed To Settle Down With Their First Loves

The idea of marrying anyone I was into at 17 makes me cringe. I know that there are people who do find lasting love as teenagers, but statistics show that they’re in the minority. Because of this, I wasn’t sold on Harry and Ginny plus Ron and Hermione ending up together. Wasn’t anyone curious about the world and people beyond Hogwarts?

Everyone Also Seemed To Settle Down Immediately

The average age at first marriage in the U.K. is 33 for men and 30 for women, according to the United Nations Economic Commission for Europe. The Parliament of the U.K. reports that the average age of women when they give birth to their first child in 29.6. To see so many characters in the epilogue married with kids much younger than this wasn’t realistic to me. Harry and Ginny would have been about 24 and 23 years old, respectively, when James was born. Although plenty of couples do have children at this age, it wasn't very true to life for Harry and so many of his peers to all do so. Apparently, things are different in the wizarding world.

When Albus Potter was headed off to his first day at Hogwarts (which is still at least a year away), he didn’t understand why everyone was staring at his family. We all know the Harry was never one to brag, but unless he had his kids living in a cupboard under the stairs, they should have figured out sooner that their father was famous. Growing up in the wizarding world, it would have been hard for them to miss that their dad was the hero who triumphed over the Dark Lord — twice.

In spite of my issues with its ending, the Harry Potter series will always be one of my favorites. With James S. Potter’s first day at Hogwarts behind us, I’ll simply return to ignoring the epilogue. I should be able to keep it up at least until little Albus’ first day of school.