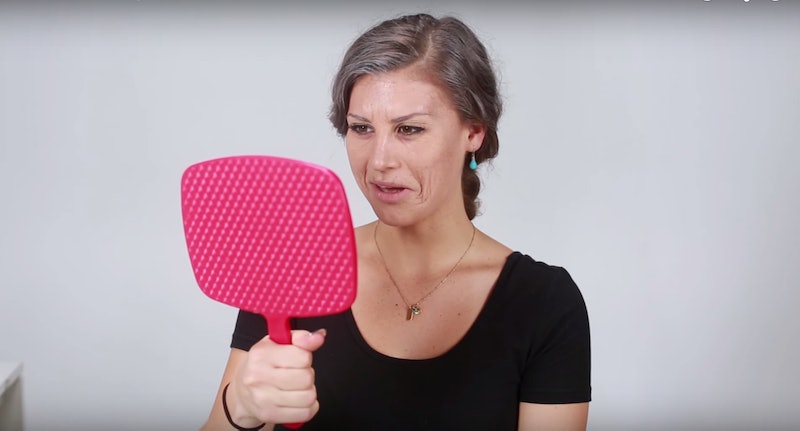 There are a lot (A LOT) of reasons to stop smoking, first and foremost of which is the fact that it is absolutely terrible for your health, but this video from BuzzFeed taps into another powerful source of motivation: Good, old-fashioned vanity. In the video, a makeup artist transforms three smokers' faces to show them how smoking will affect their appearances in the future. Smoking is known to cause premature aging, wrinkles, stained teeth, and gum disease, among a host of other problems. As the smokers in this video discover, the results ain’t pretty.

BuzzFeed teamed up with a makeup artist and Dr. Taylor Hays, Director of the Nicotine Dependence Center at the Mayo Clinic to show three smokers how they will age in the next 20 to 30 years if they keep up their current smoking habits. The three participants, all in their 20’s, vary in their cigarette consumption, with one smoking about two packs a day, another smoking three to four cigarettes a day, and another smoking about one pack a month. As the makeup transformations illustrate, the appearance of even the most occasional smoker in this group will be negatively affected by his habit if he keeps it up for the long term.

Hays explained major features of the participants' makeovers (or in this case, makeunders? "Smoke-formations"?) to BuzzFeed. He said, “The skin is more affected because of exposure to the smoke. It causes excessive wrinkles around the mouth and creases between the nose and the mouth.

He adds, “There’s also a loss of underlying tissue. So, the face becomes more saggy or more deeply wrinkled.”

The effects of smoking don’t only show up on smokers’ skin; the habit can also have a terrible effect on teeth. Hays explains that smoking causes a “higher risk of periodontal disease, and tooth loss.”

One of the participants comments, “If this is what my outside appearance looks like from smoking cigarettes, I cannot even imagine what my insides look like.” Hays confirms that these visible changes only hint at the trouble caused by smoking that you can’t see. He said,

The most important things are what happens to the organs internally. … The most common conditions that occur are chronic lung disease, emphysema, pulmonary disease (now the third leading cause of death in the U.S.). Secondly, cardiovascular disease. So, heart attacks and strokes are more common in smokers than non-smokers. And then of course cancer. Especially cancers of the mouth, throat, and lungs.

The Center for Disease Control reports that 480,000 Americans die from cigarette smoking-related causes every year (42,000 of those are caused by secondhand smoke, so we should remind ourselves that smoking doesn’t only hurt smokers). Smokers also die a decade earlier than nonsmokers, on average. With stark facts like these available, it seems almost ridiculous that anyone would continue smoking. However, it’s understandable that many smokers, forced to make a choice between preventing health problems in their distant futures and the intense craving for a highly addictive substance right now, struggle to quit. But although it may be difficult, especially as a healthy young person, to really feel bothered by seemingly far-off consequences for one’s health, it’s pretty easy and familiar to feel concerned about one’s looks. Demonstrations like the one in this video aim to appeal to people’s sense of vanity, which — let’s be honest here — is a pretty powerful force for most of us. Anything that can encourage people to make the move to quit smoking (or, better yet, never start) is a good thing. Watch the full transformations below: