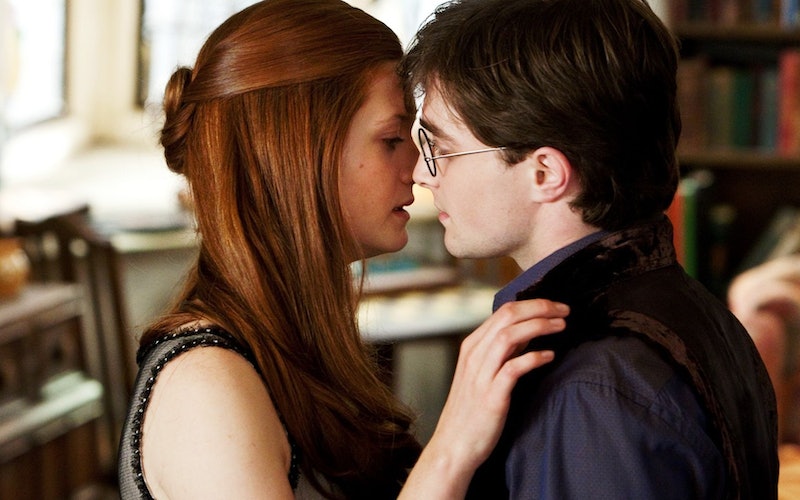 On September 1, Potterheads worldwide got some surprise news from J.K. Rowling, who tweeted to let everyone know it was James Sirius Potter's first day at Hogwarts. A few hours later, the beloved author tweeted again, announcing what the Sorting Hat had in store for James Sirius and Teddy Lupin. The Internet, understandably, began pouring out with celebrations and well-wishes all around.

Fans have been clamoring for a second series since the new book smell wore off of Harry Potter and the Deathly Hallows. Although Rowling is giving us the Jazz Age, Newt Scamander adventure, Fantastic Beasts and Where to Find Them , in November 2016, Potterheads have been left largely in the dark when it comes to events concerning their favorite characters' children. Still, even though Rowling says Harry's story is told, she hasn't refused to bring us new details concerning James Sirius and company.

I think the fury stirred up by Rowling's Tuesday announcement makes it clear: we need a James Sirius Potter book. Or books, considering none of us would say "No" to another Potter series. Jo, if you're reading this, I've got 11 great reasons why a James Sirius book would be absolutely perfect. Pretty please?

It Would Bring Everything Full-Circle

Everyone knows Remus and Tonks' son, Teddy, completes the orphan narrative that began with Voldemort and continued with Harry and Neville. However, a James Sirius book would be the perfect way to tie up all the Harry Potter loose ends and answer our burning questions. Is Head Boy Teddy as insufferable as Head Boy Percy? Have the Hogwarts faculty figured out how to keep Weasleys' Wizard Wheezes products from making their way into the school? And, most importantly, what's it like being the son of The Boy Who Lived?

It Would Be Way Better Than a Marauders Book

I know a lot of fans want to hear more about the original James Potter's experiences at Hogwarts, but we know pretty much all we need to about Moony, Padfoot, and Prongs, just from reading Harry's story. Sure, it would be cool to see more of Sirius' flying motorcycle, but do we really want to tolerate reading seven books' worth of Wormtail? Ugh. And, if we're being honest, Harry's dad was kind of an ass, so reading about Harry and Ginny's firstborn is bound to be more entertaining.

We'd Have the Chance to See the Next Generation in Action

The Hogwarts students we all know and love had a whole bunch of kids, OK? Molly and Arthur Weasley have a grand total of 12 grandkids! That doesn't include Teddy, Scorpius Malfoy, or Lorcan and Lysander Scamander. There's plenty of opportunity for these young witches and wizards to get into all kinds of scrapes, and every Potterhead wants to know all about them.

And We'd Get to See All Our Old Favorites Again

Luna Lovegood and Rolf Scamander are wizarding world naturalists, while Neville and Hannah Longbottom divide their time between teaching at Hogwarts and running the Leaky Cauldron. I can't be the only one who wants to know how they're all doing, right?

As someone recently reminded me, my favorite Hogwarts faculty member lives on as a portrait in the headmaster's office. What sneers will he have for the Potter kids? We'll only know if Rowling gives us some new material.

We'd Find Out Who Is Teaching Defence Against the Dark Arts

If you'll recall, the Defence Against the Dark Arts teacher position was jinxed while Voldemort was alive, preventing any professor for holding it longer than one year. Now the Dark Lord is gone, and has been for a while, but we still don't know who took over after Amycus Carrow got sent to Azkaban following the Battle of Hogwarts. A James Sirius sequel would let us know who's passing on the secrets of Expecto Patronum and Riddikulus.

...And Who the New Headmaster or Headmistress Is

Minerva McGonagall retires around the time James Sirius' Hogwarts attendance begins, and some fans have even speculated that seeing his name on the roll of first years was enough to make the good witch give up her position as headmistress. Knowing that McGonagall leaves sometime before James Sirius' younger brother, Albus Severus, starts Hogwarts in 2017 leaves us all wondering who takes over for everyone's favorite Head of Gryffindor. C'mon, Jo, TELL US.

There's Bound to Be an All-New Wizarding Trio

Harry's oldest son has plenty of cousins, but it's unclear which of them, if any, are in his year. We know Victoire Weasley, being the first of Arthur and Molly's grandchildren, is a few years older, and that Rose Weasley and Albus Severus are two years behind James Sirius. Still, Rowling is bound to put together a new trio of magical children if she ever writes a follow-up.

And Hagrid Will Be in the Mix, Too

Hagrid's got a long life ahead of him, what with his giant blood and all, so the Weasley cousins can all expect to see a lot of the Hogwarts groundskeeper. I'm sure he's still keeping exotic pets and telling kids the school's best secrets, so he'll definitely spice up all of James Sirius and company's fun.

A Romance between Rose Weasley and Scorpius Malfoy?

After Ron told his daughter to out-score Draco's son on every test, the ship sailed. Plenty of people want to see Rose and Scorpius together, and I can't blame them. You don't get much better than a Weasley and a Malfoy dating, so prepare yourself for all the angst that will accompany this wizarding romance.

So there's technically already a James Sirius Potter series. Of course, you can't expect Rowling to adhere strictly to G. Norman Lippert's tales, but some collaboration wouldn't necessarily be out of place. If you're curious and/or dying for your James Sirius fix, you can read Lippert's stories about Harry's son for free online.