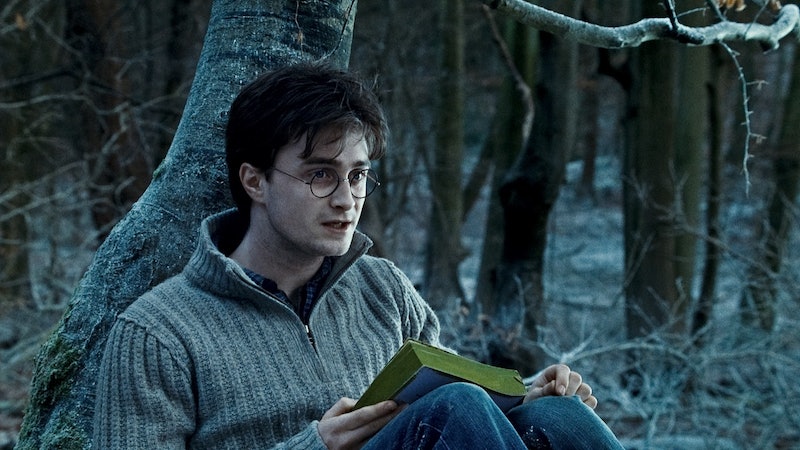 September 1 is a special day for Harry Potter fans, a time to celebrate young witches and wizards' return to school and lament the fact that we never received our Hogwarts letters. J.K. Rowling made this year's #BackToHogwarts day even more memorable when she tweeted that it was James Sirius Potter's first day of wizard school, then followed up with a Sorting Hat announcement and news about Teddy Lupin. It was a great fix, but one that has left Potterheads everywhere wanting more.

Rowling has given us plenty of information on what happened to our favorite Hogwarts trio after they grew up. Harry and Ron became Aurors, but Ron left his job to help out George at Weasleys' Wizard Wheezes. Ginny played Quidditch professionally, but retired to raise a family. And, ever the overachiever, Hermione translated The Tales of Beedle the Bard from ancient runes and became Deputy Head of the Department of Magical Law Enforcement.

Unfortunately, the Harry Potter author has not been as forthcoming when regaling us with stories of other characters' futures. The following are the 12 characters Potterheads want to know more about, along with my predictions for what Rowling's future comments about them will reveal.

After the Battle of Hogwarts, Neville Longbottom married Hufflepuff Hannah Abbott and took over teaching herbology from Professor Sprout. The Longbottoms lived above the Leaky Cauldron, which Hannah operated, until 2014, when she applied to become a Healer at Hogwarts. So far, Rowling has not mentioned any children for the couple, leading many to believe they have been childless. The author could surprise us, however, by announcing the presence of a few little Longbottoms on Hogwarts grounds.

Potterheads are still in mourning for valiant Dobby, but little is known about the fates of the two other named house-elves: Kreacher and Winky. It's assumed that Kreacher continued to — somewhat begrudgingly — serve Harry after the novels ended, and that Winky stayed on at Hogwarts. But we're still left with a few burning questions. I'm pretty certain Kreacher will have changed his mind about that whole beheading thing, and it would be great to hear that Winky found love at Hogwarts, but only Rowling can say for sure.

Viktor came out of retirement to help Bulgaria beat out Brazil for the 2014 Quidditch World Cup, and Rowling has confirmed that he found love in his native country. We don't know much other than that, however. Viktor might not be a major fan favorite, but it would be nice to hear more about how his life turned out. I'm going to go ahead and make a guess that Viktor might be gay, since Rowling seemed to be playing the pronoun game when she announced he'd found someone to love.

Poor Lockhart. Granted, he was a pretty nasty guy before his memory got erased, but a life in St. Mungo's still seems crappy, even for him. The last we heard from the disgraced wizard, he had written a memoir, Who Am I?, which is said to be his last book. Rowling has mentioned that Lockhart is much happier now than when he was erasing the memories of more talented witches and wizards, and I can just see him trying to romance the healers in the ward and maybe even starting up a repeatedly-forgotten romance with a hospitalized witch.

Albus Severus Potter just has to be a Slytherin, OK? What's better than former-Parselmouth Harry Potter having a kid in the most notorious Hogwarts house? Nothing, especially with older brother James Sirius in Gryffindor. Unfortunately, we'll probably have to wait until Albus Severus begins at Hogwarts in 2017 for Rowling to make this announcement.

Back in 2007, Rowling told Potterheads that Luna Lovegood and Rolf Scamander — the grandson of Newt Scamander — married "rather later than" their classmates and had twin sons: Lorcan and Lysander. We know the couple are wizarding world naturalists, and that Luna eventually gave up believing in some of the more off-the-grid creatures her father researched. I think Rowling will eventually tell us that Luna and Rolf take over Hagrid's class upon his retirement, because what could be more perfect that that?

Speaking of Hagrid, let's talk about Fang for a minute. The Hogwarts groundskeeper's devoted boarhound is presumed alive at the end of the Battle of Hogwarts, but we don't know what happened to him after that. I know, you're probably thinking he's long dead by now, and maybe you're right. I like to think Fang lived a really long life, longer than most dogs his size, and that Hagrid finds a similar puppy shortly after his death. No, I'm not crying, there's just dust in both my eyes.

Rita Skeeter is still writing garbage for wizarding world tabloids, including exposé biographies of both Harry and Snape, as well as a write-up regarding the Dumbledore's Army reunion at the 2014 Quidditch World Cup. You don't get much more current than that, but I'd love to see Rita popping up at Hogwarts to give false reports on the 12 Weasley grandchildren.

Charlie, the second-eldest of the Weasley children, was probably the most interesting — and definitely the least mentioned — of all his siblings. His dragons get most of the attention that would otherwise go to him, and he's always away in Romania or some such place. Charlie doesn't really care to partner up with anyone, and that's OK, but I'd love to hear about his adventures. Wouldn't you?

More like this
Rupert Grint Just Shared A *Major* Update About Ron Weasley’s Future
By El Hunt
'Mayfair Witches' Already Changed 2 Major Characters From The Books
By Grace Wehniainen
Your Guide To Watching 'Everything Everywhere All At Once' In The UK
By El Hunt and Sophie McEvoy
Prince Harry Incorrectly Recites Christina Aguilera’s “Genie In A Bottle” Lyrics
By Jake Viswanath
Get Even More From Bustle — Sign Up For The Newsletter
From hair trends to relationship advice, our daily newsletter has everything you need to sound like a person who’s on TikTok, even if you aren’t.