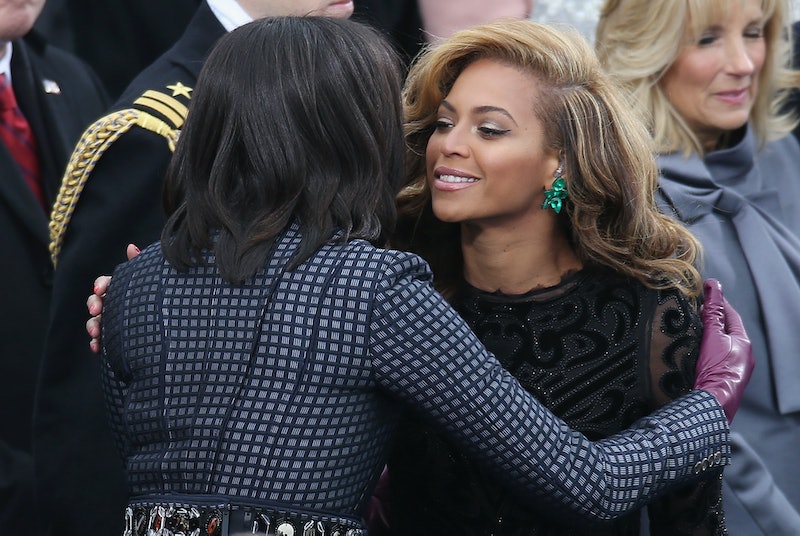 ICYMI, Sept. 4 commemorated the 34th anniversary of the greatest day ever: The day Beyoncé was born. (It's still TBD as to whether or not this will become a national holiday, but I will pine for that until basically forever). I'm not the only one who found the Queen's B-day especially important, though — in addition to me, the one and only Michelle Obama shared a special message on Twitter with Beyoncé. The first lady thanked Bey for being a "role model for young girls around the world," and she also called her "Queen (insert Bee emoticon here)" — so, based off this, I think it's safe to say that this was Michelle Obama's official marriage proposal.

It was sweet, thoughtful, sincere, and exactly the kind of birthday wish anyone would expect from the FLOTUS. Let's not forget, however, that the relationship between Michelle Obama and Beyoncé has been growing for quite some time now (this also isn't their first birthday rendezvous) — Beyoncé gave similar praise to our first lady back in 2012, gushing "Every time I see her, she inspires me, she empowers me, she encourages me to live a healthy lifestyle... I'm proud to have my daughter grow up in a world where she has people like you to look up to." I don't know about you, but this mutual respect they posses toward one another makes me feel all the feelings.

Plus, there was that recent interview Obama had with rapper Wale, where she confessed what we are all, always thinking: That when she grows up, she wants to be Beyoncé. These back and forth blessings they're sending to one another have me imaging all the scenarios of what an IRL best friendship between these two really looks like. Would they be the kind of best friends that hang out on the couch, in face masks, watching reality TV together? (Hey, a girl can dream!) Personally, I imagine their friendship to look a little something like this:

They Would Totally Agree On Everything

It would be super easy for these like-minded gals to, say, pick a place for lunch, or decide on a song in the car together (lunch: White House catering because, duh, probably bomb, and song: "Single Ladies," obviously).

They Would Hit The Gym Together

Not that either of them need tips on how to be up in the gym just workin' on their fitness — but it would be nice to have a workout partner every once in a while.

They Would Bond Over How Insane Their Schedules Are

Their lives are anything but normal, so if one of them cancels plans last minute, it's probs NBD. Who run the world? GIRLS! Busy, busy girls.

They Would Bond Over How Insane Their Husbands' Schedules Are

Because what other wife is going to understand what it's like to be married to the President of the United States/President of Hip Hop?

Beyoncé Would Teach Michelle Obama How To Flip Her Hair

Malia and Sasha Obama are being raised with as much normalcy as possible, and, as a result, are turning out to be impressively poised teenage girls. I'm sure we can attribute most of this to the FLOTUS herself.

They Would Definitely, Definitely Have Dance Parties

In which they would definitely reenact the "Single Ladies" dance, because that never gets old.

Whatever it is that these two gal pals might partake in together, I only have one final thing to say. Call me?