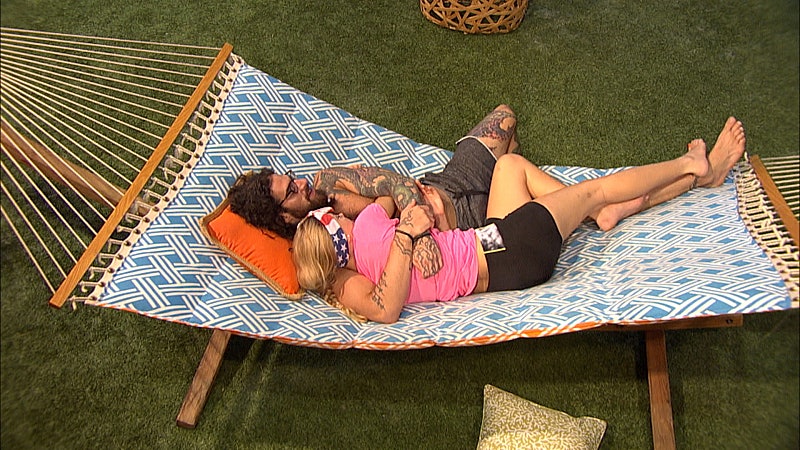 I’m not one to judge how a relationship begins. I know that perfectly good relationships can have rocky beginnings and that really rocky relationships can have the most promising ones. So I tried my best to withhold judgment when it came to Austin and Liz on Big Brother 17 and the fact that their relationship started as a form of straight-up game play. It was clear that Liz was not into Austin for anything other than getting ahead in the game and having one more person to watch her back. So when the two started to have a legit showmance, I wasn’t entirely surprised. But on Sunday night’s episode, when Liz said some pretty incriminating things about their relationship to her sister, Julia, it became clear that the honeymoon for Liz and Austin is definitely over.

And it didn’t stop there. There were other moments from the Diary Room and from around the house that made it more obvious than ever that Liz and Austin’s showmance is pretty much doomed to fail.

Need more proof? Check out this list of seven signs that Austin and Liz’s showmance won’t last once they leave the Big Brother house.

1. Austin Is Cool With Evicting Julia

Lord help the mister that comes between Liz and her sister. That’s what Julia said in the Diary Room about Austin getting in between the two of them. The fact that Austin is putting the game before his girl—and his girl’s family—is a sign that he’s way more into winning the money than winning the girl. The minute the twins find out that he was making secret plans to get Julia out before Liz is totally going to be the minute Liz cuts him off for good.

And isn’t afraid of telling people about it. It’s one thing to be into a guy who maybe needs a little help in that department, but it’s totally another to go around sharing his flaws with anyone who will listen. Any girl who is really into a guy wouldn’t volunteer information that makes him look bad.

3. Liz Is Willing To Cut Austin Off

If Austin is working out a secret deal with Steve, Liz said she’d cut him off just like she wants to cut off his beard ponytail. To which I have one thing to say: Get in line, sister.

4. Um, That Whole Other Girlfriend Thing?

When Zingbot threw a jab at Liz about Austin’s girlfriend back home, she was pissed for, like, an entire week about it. Something tells me she still hasn’t gotten over it and that it’s starting to make her second guess her future with this guy.

5. Austin Is Only Thinking About Himself

When Clay and Shelli were on the block together, Clay asked everyone to vote him out of the house so Shelli could stay for another week. That’s a true showmance right there. But Austin? Now that he’s on the block with Liz, he said that if he wins the Power of Veto, he’d go after Steve. Which tells me he has one plan and one plan only: To win the Power of Veto and use it on himself to save his hide from nomination. That’s right, folks. Chivalry is totally dead. At least in the Big Brother house this season.

6. Austin Is Trying To Make Side Alliances

With Steve of all people. Clearly we see where his real allegiance lies.

7. Austin Didn’t Tell Liz That Steve Was Going To Nominate Her For Eviction

If someone told you that your girlfriend was going to be the next person up for eviction, wouldn’t you a.) Try to convince them not to do it, and b.) Tell your girlfriend immediately? Yeah, Austin did none of those things. He just sat there while Steve told him his plan to nominate Liz and then said he had to respect Steve’s gameplay, leaving Liz to be bombarded by the news that Steve was nominating her for eviction at this week’s nomination ceremony. Way harsh, Austin.

Something tells me with all of these secret deals and conversations, that the showmance is definitely over for Austin and Liz. Or, if it does last until the end of the season, that they’re going to take one look at the tapes when they get home and find out who they were really dating while in the Big Brother house.

For more talk on showmances inside the Big Brother house, check out Bustle's Big Brother podcast. Audrey and Clay from Big Brother 17 joined in to discuss Austin and Liz (among other things), so don't miss what they had to say. Make sure to follow The Diary Room on SoundCloud and subscribe on iTunes.