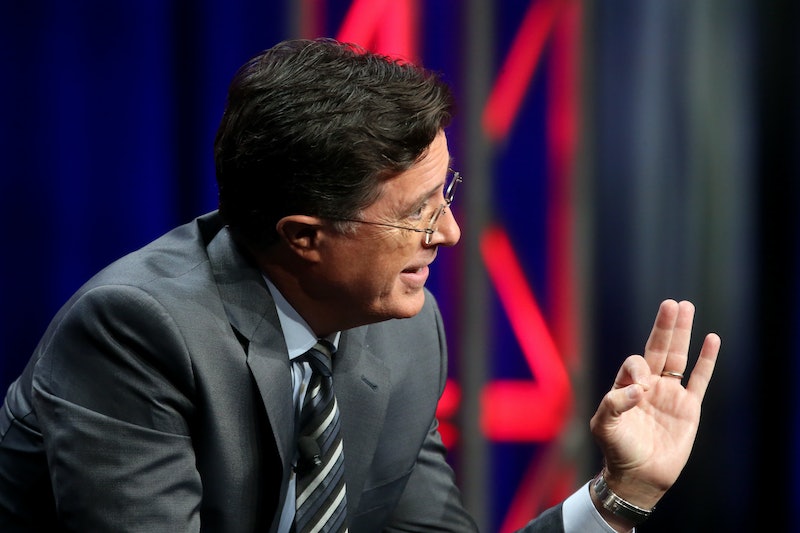 Despite the fact that many of us are excited for Stephen Colbert to take over The Late Show — no one more so than Colbert himself — I know a thing or two about how hard it is to let go. After all, watching the 51-year-old on The Colbert Report on Comedy Central used to be one of the highlights of my night, and that show is the reason that my love for the host burns with the white hot intensity of a million suns. Funnily enough, Colbert didn't build up a fan base for himself as himself. We're all incredibly familiar with his hilarious parody of a conservative pundit, who was as self-centered as he was lacking in self-awareness. However, I hope you've all said goodbye to that man, because The Late Show shouldn't feature Colbert's persona from The Colbert Report.

Colbert already has pretty big shoes to fill as he takes over from the legendary David Letterman, leaving his own footprint on a show that already looks to feature a Colbert-ish mix of entertainment and political guests. I swear, just looking at the line-up of Late Show guests that Colbert has booked makes me imagine him having an adorkably nerdy meltdown over the people he's going to get to talk to as himself for once. "I won’t be doing the new show in character, so we’ll all get to find out how much of him was me," he said to the New York Times when the news broke. "I’m looking forward to it.”

This might have come as a devastating blow to fans of The Colbert Report, but here's why we should also leave the past in the past.

1. Being Someone Other Than Yourself For 10 Years Is Exhausting

For just over nine years, Colbert gave us a hilarious parody persona that made us cry through our laughter, but even the greatest of actors only have to pretend to be someone else for something that's going to air one night a week, with frequent breaks in between. Asking Colbert to put on that persona every night of the week for longer than nine years would have been asking a lot, and I think that the Colbert Report persona has had his day in the limelight.

Hosting The Late Show as himself is one of the biggest indication that this is a new chapter in the life and career of Colbert. Why would he want to switch networks and desks just to keep playing the same old character? Since he's going from hosting one show to hosting another, it would be easy for people to get confused if he didn't retire the persona once and for all. It's time for people to decide whether it's really Colbert that they love, or who he plays on TV.

3. The Character Was Always The Joke

Oh, sure, Colbert told a lot of jokes on The Colbert Report, but the character was always the biggest joke that he was telling. There were times that even he couldn't help but crack up at the things that his character was saying with perfect seriousness. Without the persona to deliver the biggest laugh, not only do we get to judge for ourselves how hilarious Colbert actually is, but the jokes will be the focus rather than the man saying them.

4. Now We Can Focus More On The Interviews

With the way that the interviews were set up, it was occasionally hard to focus on what The Colbert Report's guests had come on the show to say. Colbert played devil's advocate in many of his interviews, frequently interrupting his guests, or arguing with them to make them better prove their point, or even just saying the most out-there comment for them to correct. Some of us (OK, me) might have been too busy laughing at him to really listen to them, which is something that could change on The Late Show.

6. It Will Give Colbert's Career A Breath Of Fresh Air

Did I mention the part where he's been doing the exact same thing in the exact same character for nine years? Colbert might have unintentionally limited himself on the Colbert Report by playing a character who would never say or do things that the real Colbert would have loved to say or do. On The Late Show, since he's being himself, he can say and do whatever he wants, express whatever opinion he wants, and even change his mind — something the stubborn persona he crafted never could.

7. It Will Help Everyone Move On

Even now that it has been a few months since a new episode of The Colbert Report was on the air, I'm still having trouble not missing the program. And, while I'm excited for The Late Show With Stephen Colbert, I'm also feeling nostalgic about the past. If Colbert were to bring the persona back, even just for a night, even just for a joke, then it would make it even harder for me to move on and accept that he's on The Late Show now. I'd end up clamoring for encore performances as his persona from now unto infinity. He shouldn't do that to either of us.

At the end of the day, it will be exciting to see what new things Colbert has in store for us when The Late Show With Stephen Colbert finally debuts. Until then, we need to leave the past in the past, appreciate The Colbert Report for what it was, and open our hearts and minds to whatever The Late Show has to offer.