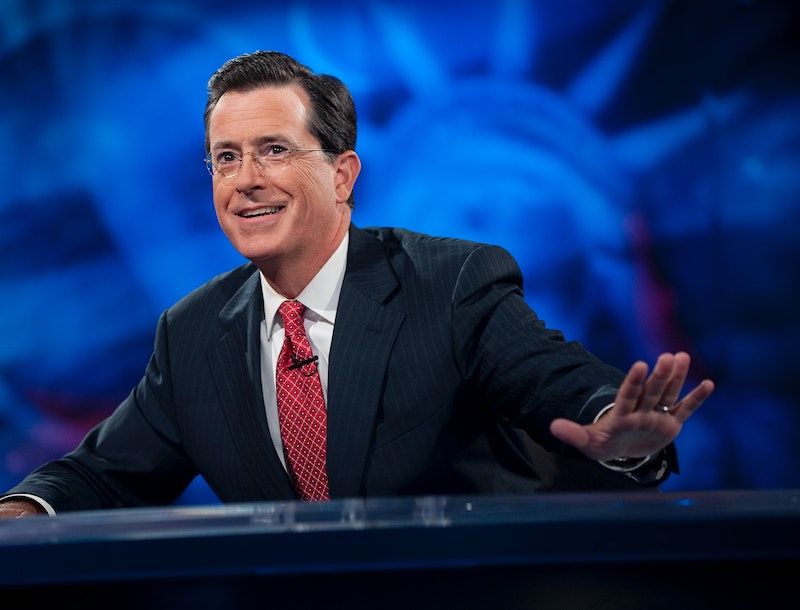 Today is a day of mourning, my friends — for tonight is the last night ever of The Colbert Report. Which makes fans of the show desperate to know when Stephen Colbert will return to TV. As a member of the Colbert Nation, I am devastated (devastated!) that Colbert will be giving up his The Colbert Report persona. Yet, I am proud of my beloved anchor that he is taking over the Late Show from David Letterman. Colbert is hilarious, intelligent, incredibly talented, and likable, so needless to say, I have high hopes that he can change the face of basic cable late-night shows. Sound like a big task? Sure. But this is freakin' Stephen Colbert we're talking about here. With his legions of adoring fans, he can do anything.

But, what's the deal, Stephen? Do you need a break or something? The Colbert Report's last show is on Dec. 18, but that's not Letterman's last show. Letterman will finish out this season and his last show will be on May 20. Colbert won't air his first Late Show until late summer 2015. I'm hoping that he is going to spend this time coming up with a way to revolutionize the late-night game. Of course, Jimmy Fallon and Jimmy Kimmel can be super amusing with the antics they get celebrities to do. But, I'm sick of the same format of stand-up, banter/games at their desk, first celebrity interview, second celebrity interview, musical act. If there's one person to spin this all around, it's Mr. Stephen Colbert.

The Colbert Report's replacement show, The Nightly Show (hosted by Larry Wilmore), will premiere Monday, Jan. 19. And while I'm excited for a new voice in comedy late-night news (and let's be real — I'm also excited for the desperately needed diversity), I'm still going to miss the persona of Stephen Colbert and what he embodies. Of course, I never thought Colbert could go through with moving to CBS with his controversial character, but part of me had hoped he would.

There was such wisdom in Colbert's satire. He could ruffle feathers from the safety of his outrageous, egotistical caricature he created. Colbert first hit the scene as a correspondent for The Daily Show from 1997 to 2005, until he launched his own show. I was in my sophomore year of college and Colbert's ridiculousness mixed with his spot-on criticism of the absurdity not only in our politics, but in our culture, helped my booze-soaked brain develop its stance on tough issues (and the not-so-tough issues too).

From his performances with famous musicians, to his episode-long features of classic authors, to his segments like Better Know a District and the Sport Report (get the pronunciation correct!), Colbert actually taught me things. Of course, I'm not saying people should rely solely on Comedy Central for their news reporting, but Colbert made his show a cultural experience. The Colbert Report was relevant and topical — and didn't hold back any punches on mocking the idiocy of our American society. Yet, Colbert still honored his array of intelligent and talented guests by disrespecting them. And did it in a way that made him likable. Genius.

All of this reminiscing of how great The Colbert Report is making me sing The Three Degrees's "When Will I See You Again." Cause, seriously — when will we see you again, Colbert?

Besides working on updating the Late Show's format, I'm also praying Colbert will use this hiatus not only for political advocacy, but to pursue other entertainment ventures. Remember the time he was the voice of Ace in The Ambiguously Gay Duo? Or when he starred in Company alongside Neil Patrick Harris? Uh, I do. And it was all awesome.

So, Stephen Colbert: you and your character will be sorely missed. But, I'll take your exit in stride and wait in anticipation to see what you'll do next. Because even though your fake persona is hilarious, your genuine self is pretty epically amazing too.

More like this
The ‘Love, Victor’ Showrunner Gave Fans Hope For A Possible Spinoff
By Brad Witter
A New Season Of The Midwich Cuckoos Could Be Coming “To A Town Near You”
By El Hunt
Everything We Know About When To Expect Money Heist: Korea Part 2
By Kadin Burnett
Legacies Showrunner Said There Is Still Hope For More Vampire Diaries
By Gretchen Smail
Get Even More From Bustle — Sign Up For The Newsletter