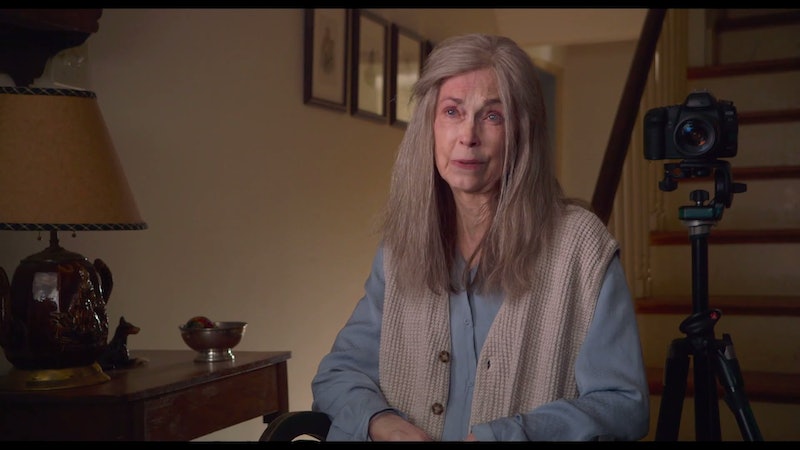 The new horror film The Visit, from writer/director M. Night Shyamalan, deals with the most classic of horror movie villains: grandparents. Yes, senior citizens provide the scares in this film, said to be Shyamalan's scariest yet, and anyone who has seen the trailer for The Visit knows how creepy these geriatrics can be. In the movie, two kids head out to the country to stay with their grandparents, whom they've never met, for a week. Everything is fine initially, but then their relatives impose a bedtime of 9:30 p.m. and warn the kids not to come out of their room at that time. Of course, they do, and they find their grandparents scratching the walls, making bizarre noises, and running around all possessed-like. You know, typical grandparent stuff. It's disturbing behavior for sure, so you're probably wondering: what's wrong with the grandparents in The Visit ? Spoilers to follow!

Toward the end of The Visit, the kids discover that the elderly couple with whom they're staying are not actually their grandparents. Instead, they are two escaped mental patients who murdered their actual grandparents and took their place. The kids discover the truth after finding their real grandparents' corpses and mental institution uniforms in the basement of the house. It's a twist ending for sure, since for awhile, it seems there may be a supernatural explanation for what's going on, but anyone familiar with Shyamalan's work shouldn't be too surprised. The director has a reputation for his movies' twist endings, so here are the other times he's pulled the rug out from under fans. Again, spoilers ahead.

Shyamalan's first and best-known twist comes from this Oscar-nominated film where Bruce Willis was dead the whole time. You obviously already knew that because everyone knows that, so I'm moving on to the next movie.

Expectations were high for Shyamalan's first film after The Sixth Sense, and Unbreakable didn't disappoint. Bruce Willis returns, this time as David, a seemingly ordinary man who discovers he has superhuman powers with the help of comic shop owner Elijah (Samuel L. Jackson). The twist comes when David uncovers that Elijah is in actuality a villain, and has killed countless people in his quest to find David, whom he believes to be, as title suggests, unbreakable. Like The Sixth Sense, this is a movie where the twist was totally justified and in many ways, it made the film.

This alien invasion thriller, starring Mel Gibson as minister Graham Hess, was the first of Shyamalan's films where the twist felt a little forced. The director clearly knew he had a reputation to live up to with his ending, but the twist here ended up being the most criticized aspect of the film. Throughout the movie, Hess's daughter leaves glasses of water all around her house. Concurrently, Hess often recites his dying wife's last words to him, "Tell Merrill (Graham's brother) to swing away." Both of these plot points come into play at the end of the film, when they learn the aliens' weakness is water. Since they happen to have plenty of just that lying around the house, Merrill "swings away" with a baseball bat to knock glasses of water into the aliens. The buildup was great, though, and the twist didn't really take away anything from the movie — it just felt a little shoehorned in.

Speaking of twists taking away something from a movie. I'm not gonna lie, The Village remains the most disappointed I've ever been in a movie theater. I was a big Shyamalan fan and was super excited for The Village, but the twist left me feeling cheated. The entire movie takes place in a 19th century village surrounded by woods, woods that are stalked by supernatural monsters that won't let the villagers leave. Sounds cool, right? And it was... right up until the end when viewers learn that the village actually existed in a patch of woods in modern times and was created to shield themselves from the scary modern world. Oh, and the monsters are fake. The ending negated all of the suspense and drama the film had produced and gave critics and audiences alike the impression that Shyamalan was more interested in pulling one over on filmgoers than entertaining them.

Possibly Shyamalan's worst reviewed film (17 percent on Rotten Tomatoes), The Happening features a toxin in the air that's causing mass suicides. Scary stuff. Then the twist comes: Plants are releasing the toxin to kill humans as a means of self defense. That's right, plants. This results in a lot of Mark Wahlberg running from the wind and trying to reason with plants, which is as funny as it sounds. The twist happens much earlier in this film than in Shyamalan's other offerings, but in this case he may have been better served saving it for the end.

As you can see, Shyamalan has had varied success with the twists he inserts into his films, and it's not clear yet how fans will react to the twist in The Visit. But hey, whatever the reception is, at least the grandparents aren't plants!