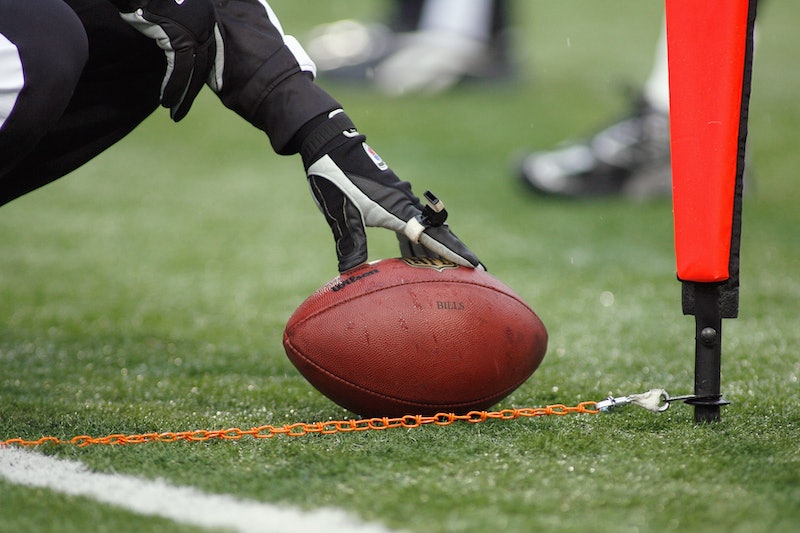 It’s hard to see summer go, but the beginning of football season is here to ease the pain. Tailgates are replacing beach bonfires, fantasy football is kicking off, and the ongoing Deflategate saga will hopefully soon be behind us as our focus shifts to the game. Like always, there will be exciting new storylines and bitter rivalries; stars will emerge and dreams will sadly be crushed. All the while, we’ll get priceless football quotes from players around the league — some comical, some brilliant, and some downright insane.

One of my favorite things about the NFL is that it brings together players from all walks of life, and a huge range of different personalities. However different, though, the league’s players are united in being fiercely competitive, driven, and willing to put their body on the line for the love of the game (or at least the paychecks). It’s a group with strong opinions, even if only some enjoy speaking with the media enough to publicly voice them.

Over the years, NFL players have had a lot of hilarious things to say about different aspects of their beloved sport. Here are 15 laugh-out-loud funny football quotes from NFL players that will amp up your excitement about the 2015 season:

1. "You have to be mean to be a football player. Some of the best players don't know how to be mean, and that's why they can't get their team to the next level. I'm supermean on the field. If my mom was out there, I'd run over her." — Michael Bennett

The Seattle Seahawks have a lot of quotable characters on the roster, but it’s defensive end Michael Bennett who routinely says the most entertaining (and usually outlandish) things. Bennett told Seattle Met about his philosophy on the importance of meanness in football in August 2015, along with dropping other gems, like the fact that he’s taunted Peyton Manning about his commercials after tackling him.

2. "I'm 6-foot-7, a big black guy running down the middle of the field. … I wear white gloves so [quarterback Jay Cutler] can see the white gloves when I wave them like Mickey Mouse." — Martellus Bennett

Chicago Bears tight end Martellus Bennett has a way with words, just like older brother Michael. He told ESPN about how he makes sure his team’s quarterback sees him and created a visual that makes me chuckle. Can't you picture a giant Mickey Mouse running jauntily down the field and waving?

Patriots’ pass rusher Rob Ninkovich told The Wall Street Journal that he had no idea how to respond after he tackled the Indianapolis Colts’ quarterback, Andrew Luck, and Luck himself congratulated him on a nice hit. He found himself thanking him awkwardly before returning to his team’s huddle.

4. "You know, football’s the same way: 'Hey, check out this dude with a mullet. Oh, wait, he just body slammed me, and my quarterback's on the ground.' See? It's just… people are off guard." — Jared Allen

Jared Allen of the Chicago Bears discussed how the mullet he had at the time helped his game in a video for the NFL Players Associations.

5. "Family members get to see you play. … Ex-girlfriends that wished they wouldn't have dumped you, they're questioning themselves right now. So, it's fun." — Steve Smith, Sr.

When asked about an upcoming Monday Night Football match-up in 2014, Baltimore Ravens wide receiver Steve Smith, Sr. told the AP some of the many reasons why it’s exciting to play on the national stage.

Houston Texans defensive end J.J. Watt had to Google what rich people buy after signing a $100-million contract in 2011, he told Jimmy Kimmel while a guest on his show. However, all of the results seemed too extravagant, so he held off on making a big purchase.

When asked by David Letterman in 2011 on The Late Show about being Hall of Famer Brett Favre’s backup quarterback and the distraction of his back-and-forth decisions on retirement, Aaron Rodgers of the Green Bay Packers had a snarky response.

8. "I love [49ers] fans because they've got some ride-or-die fans. I actually enjoy reading some of their fans' tweets because they are really disrespectful and I actually wish some of our fans would be like that sometimes too." — Darnell Dockett

While playing for the Arizona Cardinals in 2010, Darnell Dockett said in an interview published on the the team's blog that he liked the San Francisco 49ers less-than-polite fans. It seemed fitting when the 49ers signed him earlier this year, but unfortunately he was dropped by the team and entered free agency on Sept. 4.

9. "Everybody on that field has that alpha genetic that's like, 'Arrr, I'm tough.' But inside, you know, it's kind of like that 'ohhh, ohhh, geez.'" — Cam Newton

Cam Newton, quarterback of the Carolina Panthers, described what it’s really like to take a hard hit on The Dan Patrick Show, using some great sound effects.

10. "I'm just excited man, I can't wait. I get the goosebumps when I start talking about it because [head coach Andy Reid's] system is so perfect for me." — Jamaal Charles

The way Jamaal Charles of the Kansas City Chiefs described his then-new head coach in 2013 during an interview with NFL Network’s Shaun O’Hara and Willie McGinest could be edited slightly and used in a romance novel. I wonder if they had a meet-cute.

11. "I just forgot to shave, I guess. … I kept [my beard] for about two-and-a-half, three months. It was more of a superstition thing. We didn't lose ever since I had it, so I wasn't going to go in there and shave it for the Super Bowl." — Julian Edelman

New England Patriots wide receiver Julian Edelman said on LIVE with Kelly and Michael that he didn’t want a Super Bowl loss to be on him, so he couldn’t shave his beard leading up to the big game. As a Seahawks fan, I wish he had.

12. "What's weighing on my mind is how soon I can get a Bud Light in my mouth after this win." — Peyton Manning

When asked whether it was weighing on his mind how much time he’d have left in the game, Denver Broncos quarterback Peyton Manning shared his more imminent concern: relaxing with a Bud Light. Naturally, the brand was thrilled about his comment and shared the clip on Twitter.

13. "My assistant Jack Daniels and I actually destroy a cell phone every four months or so. Usually just the screen but I get it." — Chris Long

After hearing about Patriots quarterback Tom Brady allegedly destroying his cell phone in the wake of the Deflategate scandal, St. Louis Rams defensive end Chris Long joked about his own experience doing the same.

14. "The first time I heard it, you know, I'm running out to the field and everybody's saying 'Cruz' and I'm thinking it's 'boos,' and I'm looking like, 'What did I do wrong? Is my zipper down?'" — Victor Cruz

As a guest on The Daily Show with Jon Stewart in 2012, New York Giants wideout Victor Cruz talked about the “Cruz” cheers he gets from fans. And yes, it turns out there are zippers in some of the players’ pants.

15. "It's almost exciting to think about all the room for improvement that we have." — Geno Smith

New York Jets quarterback Geno Smith's optimism was shared by sportswriter Jane McManus in early December 2014. His quote came as his team neared the end of a season they ultimately finished with a 4-12 losing record. The quote is so sad, it's comical. To make matters worse, Smith is currently sitting out much of this season thanks to a broken jaw given to him by one of his one (now ex-)teammates.

More like this
13 Summer Solstice Quotes To Celebrate The Longest Day Of The Year
By Sadie Trombetta
Prince William Reveals Charlotte's Hidden Talent In Ultimate Proud Dad Moment
By El Hunt
34 Quotes That'll Inspire You On Juneteenth & Beyond
By Syeda Khaula Saad and Siena Gagliano
What Is A “Softboy?” The TikTok Term & Aesthetic, Explained
By Courtney Young
Get Even More From Bustle — Sign Up For The Newsletter