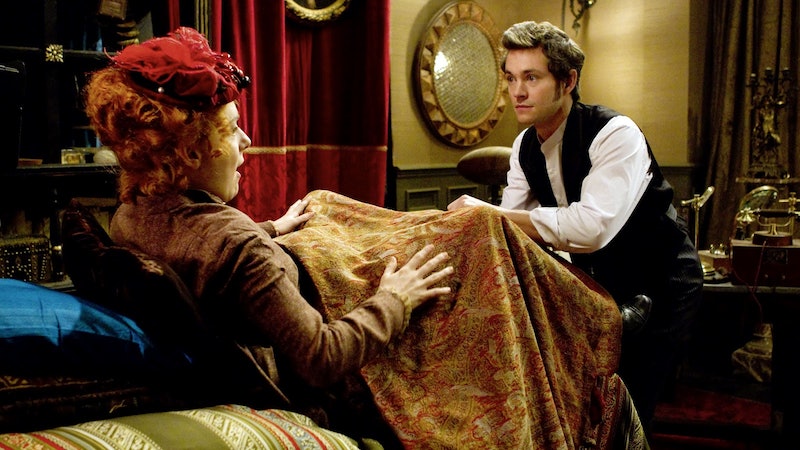 When I was a teenager, I had an older relative who used to like to tell any young person who crossed her path, "You kids think you invented sex!" And while I didn't technically think that sex had been invented in 1997 (the year I finally got someone to agree to touch my vagina), I did assume that all of the fun and interesting kinds of sex had probably been invented fairly recently (like, by people at Woodstock or something). After all, hadn't sex been pretty much limited to heterosexual missionary-style couplings with the lights off until, like, 1963?

Of course, after I took a break from having my vagina touched and decided to go read some cultural history, I learned that sexual innovation was nothing new. Not only had people been inventing and dropping sexual trends since pretty much the beginning of recorded history, but many of our most hallowed sexual and romantic traditions started as freaky sexual trends hundreds or thousands of years ago. Or, conversely, some things that we currently think of as freaky trends were considered totally vanilla and normal hundreds of years ago.

So what did our ancient ancestors do when they were looking to spice things up on date night? Here are seven historical sex trends that will leave you unable to look your history textbook in the eye ever again.

The ancient Egyptian enthusiasm for oral sex is credited by some historians with creating another cornerstone of modern society: lipstick. Egyptians are often thought to have been the first culture to wear makeup. Under this theory, the Egyptian enthusiasms for makeup and oral sex collided when ancient Egyptian courtesans publicized their oral prowess by coloring their lips — a practice that eventually evolved into our modern red lip classic thing that you like.

Modern Equivalent: Those sex-related jelly bracelets from that episode of Degrassi.

The Middle Ages were not such a great time for banging. The Church had very restrictive rules about whom you could bang and when you could get down to it. And if you went against one of these rules — by doing anything from having gay sex to having sex with your spouse on Sunday — you could be severely punished, sometimes with death.

Of course, you can't stop people from banging, even if you make crazy rules about it, and so people in the Middle Ages kept on doing it. But the restrictions on sex — as well as changing ideas about things like whether marriages should be arranged by families or voluntary — led to the creation of a concept called "courtly love" in the late 11th century.

Courtly love existed between two people who were not married to each other, but probably were married to other people. Typically, the female in a courtly couple was a noblewoman in a marriage set up by her family; her male lover may have been a troubador, knight, or other man of the courtier class. The man put his feelings for the woman into songs or poems — celebrating their emotionally elevated the love which they were doomed to never fully express as married couple.

In fact, though it involved constant declarations of eternal love, courtly love seldom involved actual sex. It was kind of a precursor to what we now call "emotional cheating." But as a common subject in art and entertainment, courtly love changed many popular ideas about love and romance. And many of the rules of courtly love (like that "suspicion of the beloved generates jealousy and therefore intensifies love" and "thought of the beloved never leaves the true lover") are still popular among teenagers, immature adults, and characters in romance novels to this very day.

Modern Equivalent: Someone from Tinder whom you exchange epic texts with but refuse to meet in person.

Despite what you may have heard from, well, everyone, the Puritans banged. A lot. By some estimates, one in three Puritan brides were pregnant on their wedding days.

But while that sounds shockingly modern, the average Puritan was also into some stuff that we'd consider advanced-level sexuality today. Like public sex. Having sex in a field, forest or hedge was a normal part of Puritan life, as was having sex in an outhouse, porch, or a room where other people were present. It's not (necessarily) because they were wildly kinky — there just wasn't a ton of private space indoors, which made such public sex a necessity.

But necessity or not, it's still part of our American heritage. So the next time you hear someone go on about how we're moving away from the original values that our country was founded upon, make sure to remind them that many of those early European settlers in America spent, like, all their free time doing it in an outhouse.

Modern Equivalent: Doing it in your car because your roommate is watching The Goonies.

Victorian sexuality has become quite the historical hot topic in recent years, as the idea has been popularized that Victorian women diagnosed with "hysteria" (basically any physical or mental health issue) were treated by being brought to orgasm by doctors with vibrators. Some historians have come out to say that our understanding of vibrators and hysteria is confused, and that while Victorian doctor Morton Granville invented the first motorized massager, it was created only to treat injured muscles, not love muscles.

What's the truth? Were Victorian women prescribed jill-off sessions that way doctors today prescribe foot ointment? Or is it all just wishful thinking? The jury is still out. But there is one fact we know for sure: Vibrators — er, excuse me, "personal massagers" — as we know them were invented in the Victorian era. And for that, we must thank our Victorian ancestors, even though they were kind of the worst.

Modern Equivalent: That "back massager" you found under your mom's bed (sorry).

Though the '60s get much of the press as the era that popularized free love and premarital sex, that line of thinking gets a lot wrong. Premarital sex was already quite popular, and ideas like non-monogamy actually took deep hold in the public imagination in the next decade. Mainstream American pop culture in the '70s often openly championed non-monogamous sex, even (especially?) for already-married couples who had been previously monogamous.

In 1972, the book Open Marriage by Nena and George O'Neill became an international bestseller. It was the first mainstream voice to advocate for emotional commitment without sexual monogamy. Many people followed suit and experimented, leading to "key parties" (parties which couples attended to swap partners) as well as heterosexual sex clubs focused around swinging, like New York City's famous Plato's Retreat, which opened in 1977 (which followed in the longtime tradition of gay bathhouses). Though this era of open marriage experimentation is often remembered as a cultural misstep, it opened the door for today's takes on non-monogamy.

Lest you think S&M was popularized by Christian Grey and his dad jeans, know that the practice experienced numerous profile booms through the 20th century. Bondage and power exchange sex play had long existed as underground endeavors. And they'd periodically surface as mainstream trends — like in the 1950s bondage photography featuring Bettie Page, or the hit 1986 movie 9 1/2 Weeks, which was basically the 50 Shades of its day.

But S&M really surfaced for air in the mainstream during the '90s. S&M and its stylistic trappings — from vinyl fetish clothes to whips as accessories — became quite trendy, with a 1992 Versace collection called "Miss S&M" leading the pack. S&M scenes were used to signify danger or cutting-edge cool in a variety of TV shows and movies during the decade — so much so that the 1994 Rosie O'Donnell movie Exit to Eden parodied the trend.

Major publications like New York Magazine, The Chicago Tribune, and Spin sent reporters to cover the "new trend" of bondage and sadomasochism, leading to countless "undercover" reports from writers who attended S&M clubs and penned shocked articles about how everyone was running around spanking each other.

More like this
How To Do The Intimacy-Boosting Lotus Sex Position
By Laken Howard and Lexi Inks
The Best Time To Date After A Breakup, According To Experts
By Bustle Editors
Expert Tips For Being On Top When You're Plus-Size
By Lexi Inks
Jennifer Coolidge Got A Lot Of “Action” Thanks To 'American Pie'
By Catharina Cheung
Get Even More From Bustle — Sign Up For The Newsletter