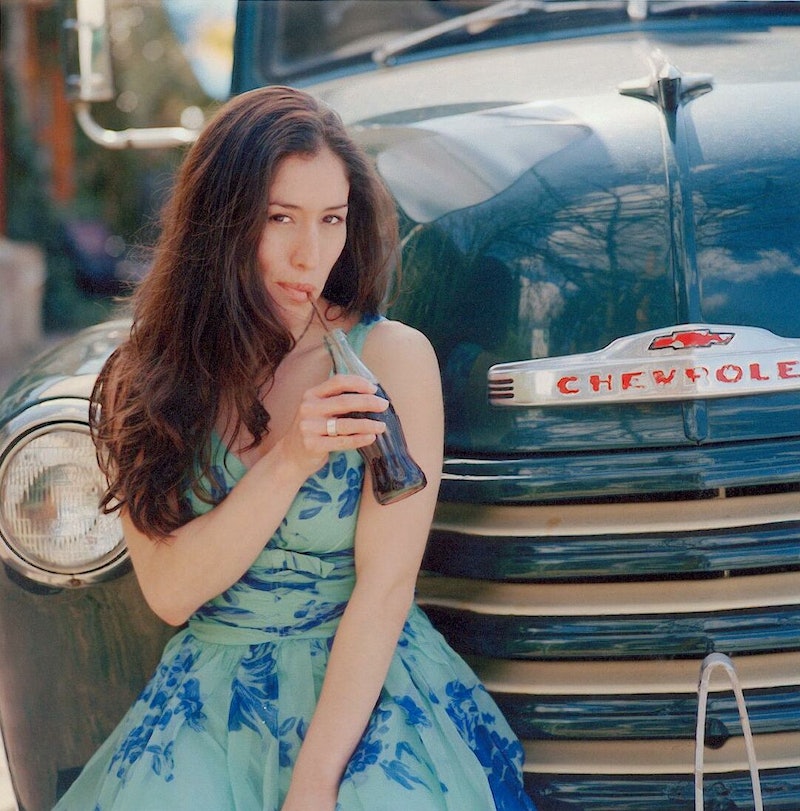 In the years between the first time you got your period and the first time you legally rented a car, you probably heard a lot of questionable sex advice from people who claimed to know better than you. Typically dispensed by such reliable sources as your sister's roommate's coworker at the fro-yo store, most of this dubious wisdom proposed easy solutions to complex-seeming sexual problems. Find yourself condomless in the heat of the moment? No problem — just make your own condoms out of plastic wrap, sandwich bags, or uninflated balloons that say "Get Well Soon, Grandma!" Then you're able to get your rocks off and recycle at the same time! A win for your vagina and the environment (vaginronment), right?

Well, it would be a win, if the D.I.Y. condom method actually worked. But it doesn't. The source of this confusion seems to be based around the fact that you can use non-microwavable plastic wrap as a dental dam (but only the non-microwavable kind — the microwavable variety has small holes in it, so it doesn't prevent the transmission of disease). But just because plastic wrap is good for oral sex performed on a vulva, doesn't mean it's good for anything involving a penis — it's just too hard to keep the fluid inside the wrap, or the wrap on the penis itself, for it to work as an effective contraceptive. How are you going to secure that thing to a penis? A decorative scrunchie? Your Fitbit band? A chip clip? What is your vagina, an actual garbage dump? Just buy a real condom, you maniac!

But the D.I.Y. condom isn't the only fake contraceptive "hack" going around. Please do not attempt any of the seven following safe sex myths when you're trying protect yourself this summer. Just use a condom, damn it! They're much easier to use and sexier than uninflated balloons or soda douches, I promise.

Myth 1: You Can't Get Pregnant If The Guy Warms His Testicles Up Beforehand

Reasoning: Warming up the testicles kills sperm inside them, making the dude's semen safe to touch/hump on.

Reasons Why This Totally Doesn't Work: Half of you reading this are going "What are you talking about? Did you make this one up while you were drunk?" and the other half of you are screaming, "I remember hearing this in high school!"

And like many of these safe sex myths, the 'heated balls' one grows from a small grain of truth — a handful of studies researching experimental male birth control options have found promising results using heating techniques to render men temporarily sterile. Emphasis on the word "experimental" there — these trials involved new and specialized testicle-heating devices, not just general heating of the testicular area. And even those specialized devices have not yet been cleared for general use. So is having your dude dunk his Hardy Boys in the jacuzz for 10 minutes before you get down to business going to keep your womb sperm-free? I wouldn't bet on it.

Myth 2: You Can't Get Pregnant If The Guy Masturbates First

Reasoning: If a guy masturbates before sex, and then bangs immediately afterwards, there won't be any sperm left to get his partner pregnant.

Reasons Why This Totally Doesn't Work: Guess what happens during a "refractory period," a.k.a. the amount of time a male body needs to wait between having an orgasm and being able to get an erection again? If you guessed "more sperm," you're right! And here's your prize: more sperm (sorry, that was a terrible prize; I'm going to have a very serious talk with our producers later).

The male body readies more sperm during the refractory period, so there's no way to "wank away all your sperm," as it were.

Myth 3: You Can't Get Pregnant Your First Time

Reasoning: Hey, what are the odds?

Reasons Why This Totally Doesn't Work: Turns out, the odds are pretty bad! When it comes to sex, you don't get to have a "warm-up round" that "doesn't count" — you are just as likely to get pregnant your first time having sex as you are your thousandth. There is absolutely no research that suggests its more difficult to get pregnant or catch an STI the first time you have sex — and honestly, there is no crappier way to begin your sex life than with an unplanned pregnancy or STI. So for the love of all things boner, please wrap it up.

Myth 4: You Can't Get Pregnant You Do It In A Specific Position

Reasoning: The sperm from a man's semen can't reach a woman's reproductive system if you have sex with the woman on top/while standing up/in the "Reverse Pikachu" (an extremely unnerving-sounding sexual position that I just made up but that you are free to put into use on your own time).

Reasons Why This Totally Doesn't Work: The science of conception isn't so simple that gravity is the only deciding factor — even if a lot of semen spills out of a woman's vagina during or after sex, you only need a tiny bit to get pregnant. And our reproductive systems are filled with mucus and other things intended to support sperm and help keep it on track to its destination. Sperm are able to swim successfully in all sorts of directions, and you definitely can't "trick" them by banging while hanging from some monkey bars.

Myth 5: You Can't Get Pregnant If You Drink/Douche With Soda

Reasoning: Certain sodas, like Mountain Dew, have become the subject of urban myths that claim they possess additives that can lower the sperm count of drinkers. There are also rumors that flushing your vagina out with certain sodas after intercourse can "kill" sperm.

Reasons Why This Totally Doesn't Work: There's absolutely no research confirming that drinking any kind of soda can lower your sperm count. And a 1985 study out of Harvard Medical School found that no variety of Coca-Cola worked to prevent pregnancy if used as a douche after sexual intercourse.

In fact, no kind of douche works as a contraceptive — douches can actually push sperm towards your uterus. Even in your best case scenario, douches will simply do nothing to decrease the odds of those swimmers reaching your eggos. Plus, using a douche right after sex can increase your odds of contracting an STI or other infection. In fact, most doctors recommend that you don't douche, period, because it can cause havoc among the good bacteria that keep your vagina from being overrun with the bad bacteria that cause yeast infections and other such unpleasantness.

6. You Can't Get Pregnant If You Jump Up And Down After

Reasoning: The semen that drips out when I jump will expel that pesky sperm.

Reasons Why This Totally Doesn't Work: Ah, if it were only that easy. But, much like trying to game the system by having the woman on top, jumping up and down to prevent pregnancy just doesn't work. Once the sperm is in there, the damage is pretty much done — so jumping, dancing, or squatting over one of those super-powerful bathroom hand-dryers will not do you a lick of good.

7. You Can't Get Pregnant If You Have Sex In Water

Reasons Why This Totally Doesn't Work: It's not so easy to trick sperm, people! They have one job to do, and they are really committed to getting it done, regardless of whether you are on land, sea, air or wedged in some kind of time-portal. Water won't rush into your vagina, carrying that naughty sperm away, if you have sex in the water — sperm will still go into your reproductive organs when you free willy, with the added bonus that having sex inside a body of water can irritate your lady-miss with bacteria or chlorine. So take a pass on the hot tub sex, guys. It's not that fun, and you'll feel super weird about it later when your dad has to go soak in the hot tub to soothe his backache.

Seriously, guys, just use a condom. They're better than trying to shoot a fountain soda into your Sailor Moon, I swear.