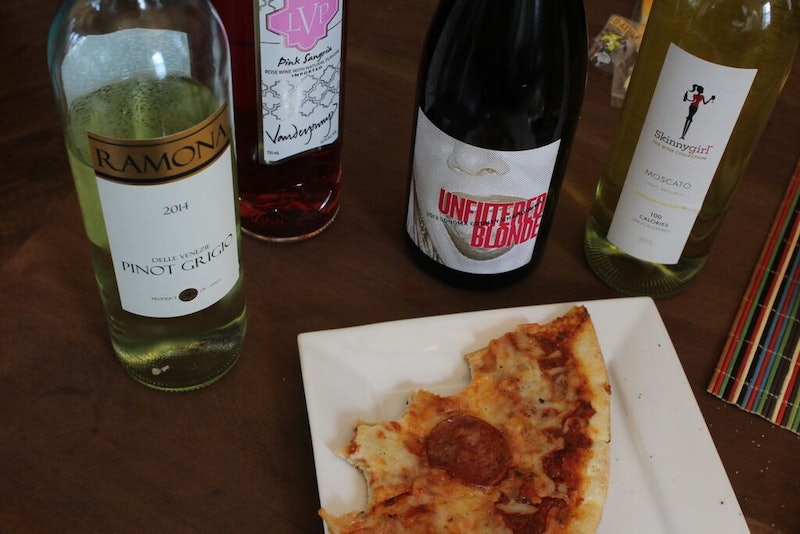 When it comes to wine pairings, nothing goes better with any form of the beverage than the Real Housewives series. These two are just made for each other. For one thing, there's the similarities between wine and Real Housewives itself. Real Housewives, like many reality TV series, is a show you watch when you need to chill out. (As much as I enjoy Housewives, it doesn't ask much in the way of critical thinking.) Similarly, having a glass of wine is all about relaxation. In addition to this, the drink is perfect for the actual Housewives. I mean, how many episodes have you seen where the ladies are drinking wine, or throwing wine in someone's face, or bragging about their own wine brand? All of them. All of the episodes.

Because of this perfect match, I decided to take advantage when I heard that Brandi Glanville was releasing her own wine, Unfiltered Blonde. I didn't know what "unfiltered" would really even mean when it came to wine, but who cares! I had to try this thing, and decided that because Real Housewives and wine go together so well, why not add in a third, very important factor when it comes to watching TV: junk food.

Much like Brandi herself, this one took some time to get used to, but its value soon became apparent to us. "It's like you left a bottle of wine open after a party and the next day you had such a bad hangover that you need a little more alcohol, and you're so desperate that you drink a little bit," Kelsea said. "I could see dealing with it," I added. Fortunately, our video editor, Katie, came in while we were tasting and explained that, as someone who previously worked at a wine bar, she knew that Unfiltered Blonde was a very "oaky" chardonnay and was actually pretty tasty. I'll admit, I'm not a chardonnay drinker, so this was pretty enlightening.

The cheese stick made it "taste sweeter," according to Kelsea. The sour candy was awful and made us realize that the pairings in our ridiculous experiment actually mattered. The Doritos were even better than the cheese. The Froot Loops made Kelsea say this: "Ooh. It hurts now."

The pizza almost beat out the Doritos, but in the end the Cool Ranch flavor really went with Unfiltered Blonde. And, hey, if Brandi can make a wine that goes well with Doritos, I can't hate on that. (Plus, we all agreed that hers has the best name.)

"I can definitely see how she just, like, chugs these." — Lia Beck

Kelsea concluded that the cheese stick "just takes away all the good things." The Froot Loops are "terrible" with Ramona Pinot, according to Martha, but for the record she also said, "Um. That was terrible. This wine is terrible." And the Froot Loops and sour candy were no good because they were too sweet.

The string cheese won this round. Even though we weren't huge on the pairing at first, everything else really didn't go well with this wine, so it won by default. Truth be told, apparently Ramona's wine is best consumed on its own... pulled out of your purse when you smuggle it into a fancy Upper East Side event.

We're pretty all over the place with this one. My first reaction wass "Ugh. Oh! It's bad." Whereas Martha said, "But you know what I have to say about this wine? It's that it's my favorite so far."

Kelsea said of the sour candy, "It was the first time that the candy did not make the wine taste like battery acid." Martha, who still was really into this wine added, "This one is just sweet enough. It's the Goldilocks of wine." As for the Doritos, we basically just realized we like Doritos:

Kelsea: I think I just like Doritos.Lia: That's the lesson of this: Doritos are good and I should eat Doritos more often.Martha: Whatever's in the Cooler Ranch balanced it out.Kelsea: The unicorn dust?

The best part of tasting this wine was when we all realized it tastes exactly like Juicy Juice and I was transported to another place and time (my parents' kitchen, 1996). Kelsea concluded that "It tastes good, but it's supposed to be a sangria, like a summer beverage, but it's like holiday punch." "It's like mulled wine, but cold," I added. Kelsea also noted that it tastes like "all spice," which I mishear as "Old Spice" but totally go along with because we are four wines deep at this point.

The cheese made it "spicier" (apparently?). We "established that sour candy and any wine is terrible," according to Martha. "There is too many spices in this and too many spices in this," Martha also decided when it came to the Doritos. And I explained that "I'm doing it wrong because my conclusion is pizza is the best one for every wine."

At this point, we were basically a mess of giggles, but apparently, Froot Loops go best with this one because they are sweet and the wine is spicy.

In the end, if you're drinking wine, eating junk food, and watching Real Housewives, you probably aren't thinking too much about pairings, but hey, as strange as it may seem, there actually are junk foods that go better with certain made-by-reality-TV-stars' wines. If you have a wine that's a bit spicy, grab something sweet. If you have a smoky wine like Unfiltered Blonde, pair it with something salty. And, when all else fails, seriously, just order pizza.