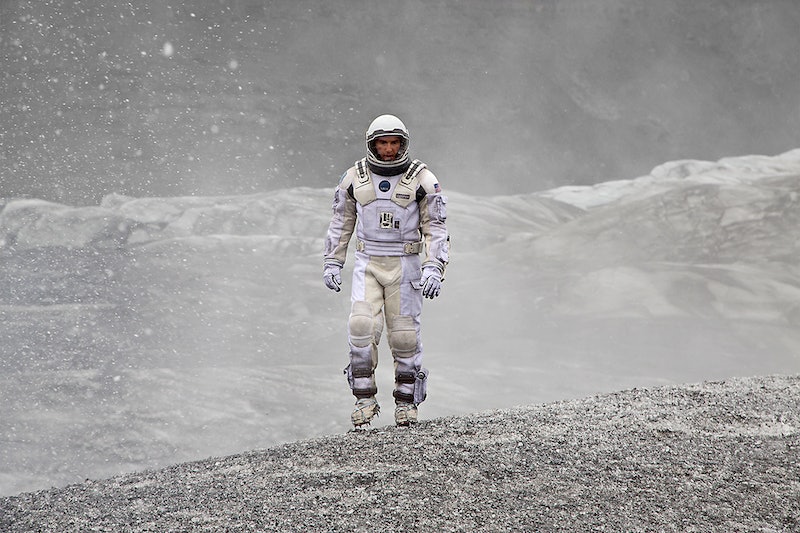 The words “original” and “blockbuster” seldom find one another’s company these days. The current era’s highest budgeted and highest-grossing films are almost without anomaly adapted or sequelized from existing properties. Despite viewers' proclivity to support said features, many still yearn for original stories across the genre spectrum. Fighting against the franchise trend, however, are a few directors insistently pumping out individual projects: Chief among them, and curiously so, is one Christopher Nolan, whose next film is set for 2017.

We call back to the aforementioned era, when the blockbuster first reared its head in the form of Jaws and Star Wars, and continued on by way of Close Encounters of the Third Kind, Raiders of the Lost Ark and E.T. The Extra Terrestrial. More or less consistent among the lot was the idea of enchantment, a notion intrinsic of Spielberg’s cinematic outlook and adopted by many a filmmaker to spawn thereafter. That same spirit evades most of Nolan’s far colder, more grounded work — the director of Memento, The Prestige, and the Dark Knight trilogy inherits his temperament, perhaps, from another 1970s hit: Ridley Scott's Alien.

Funnily enough, the Alien brand might find itself in the hands of another director working tirelessly toward the end of original filmmaking: Neill Blomkamp, whose filmography is unfortunately a good deal less revered than that of Nolan’s. The District 9, Elysium, and Chappie director proves that Nolan is not alone in his marriage of originality and epic form. The obvious example for comparison against these two directors' works is James Cameron’s Avatar: After an unparalleled release in 2010, however, the technical masterpiece lost grip on the public’s attention in a way that the similarly aged Inception never has, boasting esteem beyond its aesthetic that Cameron’s otherworldly picture never quite gained.

While Cameron caters to the eternal gestation of Avatar 2 and Blomkamp sets his sights on a new franchise venture, Nolan works toward his next original project, which we can bet will be just as cold, deliberate, and technically proficient as everything he’s put out to date. But Nolan’s ideology doesn’t exist in a vacuum. Perhaps the present’s absence of original pieces vivid in mysticism and spirit is connected to its excess of adaptation.

Perhaps we can no longer accept magic and earnestness on its own accord. We need to filter this kind of whimsy through the deconstruction and rearrangement intrinsic to the adaptation model, specifically in the realm of Marvel Cinematic Universe (which prioritizes the play of genre and tone). As for our original accounts, we need those to eschew the breed of humanity that we’ve all but cast out as antiquated in favor of mechanics. Nolan builds his pictures like clockwork, and pumps them to the brim with brains. But heart? That’s something we’ve never quite seen in a Nolan venture — at least not to the degree that we used to see coursing through all of our blockbuster event films. So why is it that the only man we’ll allow to continuously make original movies seems uninterested in the one focal component that charged the species in the first place? Well, that’s on us.