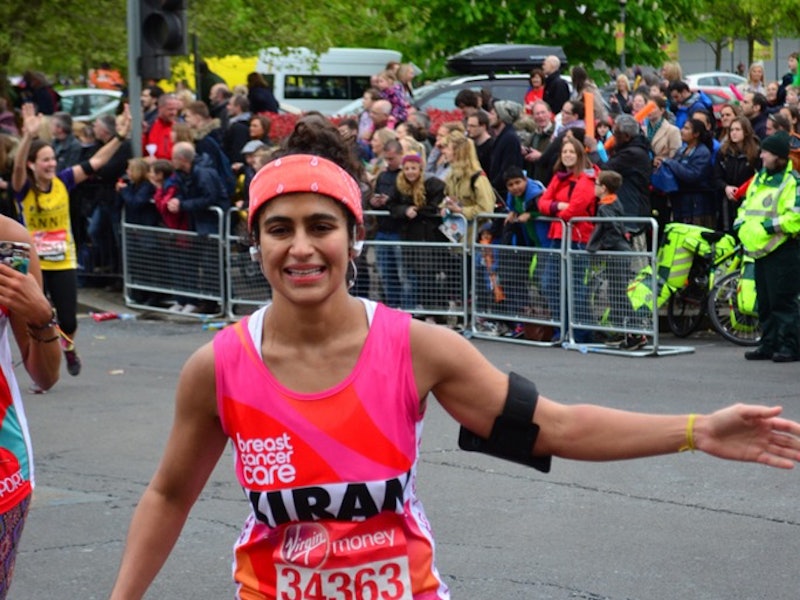 If you're someone who leads a full, exciting life that does not involve following every micro-controversy that tumbles across the interwebs, you may be staring at this headline right now, muttering "What is free bleeding?" to yourself. If you're someone who spends every waking second following the ridiculous online feuds of strangers (ahem), you might think free bleeding is just a weird anti-feminist 4chan hoax from 2014, one designed to make women's rights activists look kooky. And while that is partially true — 4chan's "Operation Freebleeding" brought the idea of not using menstrual products during your period and simply bleeding onto your clothes to a wide Internet audience — the actual concept of free bleeding existed long before the 4chan prank, and it has taken on a greater life of its own.

Though most people first heard about free bleeding in the blizzard of publicity following the 4chan hoax, the concept has been kicking around the feminist blogosphere in one form or another for the past few years. The earliest online discussion of free bleeding seems to be a 2004 post on a blog called All About My Vagina, where the author discusses how her "laziness" about her period prompted a personal-is-political awakening about menstrual blood staining — one that prompted her to abstain from using menstrual products for a while:

I don't mind rinsing my panties out in the sink, or getting blood in the sheets now and then. I like not feeling like I have failed somehow when a product leaks...Mainly it is just about being comfortable with menstruation....I am not lazy! I am not irresponsible! I just think it is ok to overflow sometimes! And it doesn't make me a new age flake who organizes women's retreats (not that there is anything wrong with that, it just isn't me)! It is nice to notice that "free bleeding" can be a smaller, less extreme gesture than the way I usually see it portrayed.

The next major mention of free bleeding online came in 2012, when photographer Emma Arvida Bystrom posted "There Will Be Blood," a fashion spread in Vice that depicted women engaged in everyday acts (studying, making out, waiting for a bus) with blood stains blooming around the crotches of their outfits.

Though Bystrom's piece didn't have any text, it prompted further online discussion, including a 2012 Feministing community post on free bleeding. In it, blogger Kelly Jo assesses the wide array of effective menstrual products available to modern women, which allow us to remain "clean" and stain-free during our periods — but then wonders, "what if I wanna leave a trace?":

I do feel expected of. Like I have to take care of my period so I can be a functional member of society...So enter the idea of “free bleeding.” More of a mindset than it is an action, the idea is...letting ourselves bleed. No judgement, no worries about messiness or cleanliness. Just letting it happen...This might look different for different menstruators. We are always, technically, “letting” ourselves bleed...But how often do we take a second, or a few, or a whole menstrual cycle, to mentally let our body do it’s thing. And appreciate it for what it does?

Despite these thoughtful takes on the issue, the first high-profile shot of publicity for the concept came from 4chan. 4chan's infamous /b/ board launched a series of anti-feminist hoaxes over the past several years, including a faux activist movement to abolish Father's Day. Like these other anti-feminist cons, "Operation Freebleeding" was dolled up to look like a legitimate feminist enterprise; the project used fake Twitter accounts and Photoshopped pictures to pretend that menstruating without a pad or tampon was a hot new trend sweeping feminist communities worldwide. The idea was to leverage this fake trend to turn people against feminism — you know, because period blood is so gross and toxic and also turns you into stone if you touch it? Who could possibly endorse a movement down with that, right?

"Operation Freebleeding" was pretty quickly outed as a hoax, but it introduced the idea to a larger community, and some of those people were intrigued. Writer Kayla Goggin gave freebleeding a shot earlier this year for xoJane, and said that "The fact that I happened to be bleeding didn’t interfere with anything that I did; if anything, it felt great not having a foreign object inside my body to staunch the bleeding, plus my cramps were significantly lighter." Goggin was also careful to note that

For me this experiment was a novelty, but there are millions of women who need and don’t have access to feminine hygiene products. What I perceived as a fun, semi-liberating experience could easily be miserable and humiliating under different circumstances.

Free bleeding received another gush of publicity (sorry) when Kiran Gandhi (pictured above) ran the London Marathon while free bleeding this past April. Gandhi wrote a blog post about her decision to forgo a tampon or pad while running:

I RAN THE WHOLE MARATHON WITH MY PERIOD BLOOD RUNNING DOWN MY LEGS. I got my flow the night before and it was a total disaster but I didn’t want to clean it up. It would have been way too uncomfortable to worry about a tampon for 26.2 miles...I ran with blood dripping down my legs for sisters who don’t have access to tampons and sisters who, despite cramping and pain, hide it away and pretend like it doesn’t exist. I ran to say, it does exist, and we overcome it every day.

Gandhi elaborated in an essay for Medium:

By establishing a norm of period-shaming, [male-preferring] societies effectively prevent the ability to bond over an experience that 50% of us in the human population share monthly. By making it difficult to speak about, we don’t have language to express pain in the workplace, and we don’t acknowledge differences between women and men that must be recognized and established as acceptable norms. Because it is all kept quiet, women are socialized not to complain or talk about their own bodily functions, since no one can see it happening. And if you can’t see it, it’s probably “not a big deal.”

So while it may owe its increased visibility to the 4chan hoax, free bleeding has a much longer history (I'm sure it has an even longer history than the one documented here, because I doubt the first woman who decided to just bleed on her underoos instead of getting a pad waited for the invention of the Internet in order to do so).

Gandhi's high-profile act of free bleeding — which was covered in publications like the New York Times — changed the conversation, leading many people to wonder if, despite its origins, free bleeding might be an important political act.

For some people, interest in free bleeding symbolizes everything wrong with a particular brand of self-involved feminism:

While others have been inspired to spark a larger conversation regarding the principles that it brings up:

It seems that like pretty much anything that has to do with feminism or the cultural conversation about women's bodies, free bleeding is a complex topic. But if you get something out of it, go for it. As Dr. Eleanor Draeger told UK blog The Debrief, there's nothing unhealthy or medically hazardous about free bleeding (as a lot of anti-free bleeding folks claim).

So if you think it would be interesting or liberating, hey, why not try it? The only thing you have to lose is your last pair of stain-free undies.