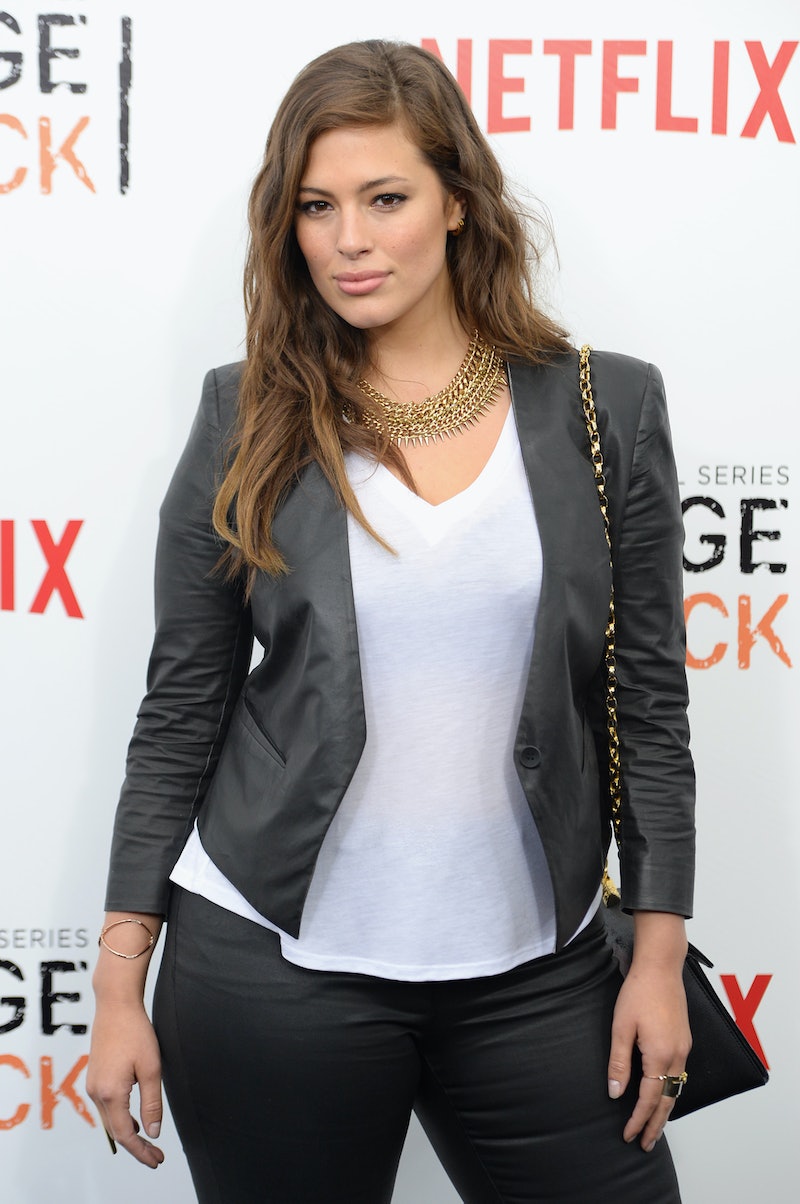 Plus-size model Ashley Graham has had one heck of a year. The gorgeous young woman has been the first non straight size model in Sports Illustrated Swimsuit Edition and starred in Lane Bryant's #ImNoAngel campaign. She's such a body positive icon to many, but in a recent interview with People, Ashley Graham thinks girls need more curvy role models they can admire. With all of the hullabaloo around Nicole Arbour's "Dear Fat People" viral video where the YouTube comedian references plus size people as also being "plus" several health problems, seeing Graham champion more diverse representations of the female body is particularly refreshing.

Graham's crazy successful year only seems to be on an upward trajectory thanks to her new plus size lingerie collection for Addition Elle and Nordstrom. The line is a gorgeous celebration of sexiness and confidence at any size, and this week, the looks are set to debut at New York Fashion Week. In fact, she told People, "I believe we're the only plus size fashion show that will be in New York Fashion Week, which is truly exciting." Talk about some crazy and exciting news!

Graham seems thrilled about the show and in her conversation with the magazine, she talks about how such advancements can impact younger girls. She explains, "I think young girls need to have role models who are curvy, who are talking about their cellulite, who are talking about their backsides, because a lot of people are not doing that. They're hiding behind retouching. I mean, I wear Spanx, but it's not something [other people] are very open about. I just really want to be open."

I can definitely get behind Graham as a role model. She easily one of the most stylish and body positive stars out there! Her candidness about her own body and willingness to buck traditional styles for plus size women are admirable. Her modeling and design work extends behind herself as well. She views the advances she's made in the industry as a way to increase the visibility of plus size women in the future. She says, "I believe that what I'm doing, and what other plus size models of my generation are doing, is continuing to open that door for the next plus size model to come in and to not be labeled as a plus size girl, for her not to be judged by the number that's inside of her pants, for her to be able to be on the cover of American Vogue and it not have the whole article be about, 'Are you fat and happy?'"

This isn't the first time the model has spoken about accepting bodies and encouraging others to do the same. Back in May, the star gave a Ted Talk that was inspiring and honest. She began the talk with self affirmations in the mirror that are a perfect example of why she's such an incredibly role model for young women. Graham said to herself during the Ted Talk, "You are bold. You are brilliant, and you are beautiful." All those things are true of Graham, and I adore that she's encouraging other women to feel the same way about themselves.