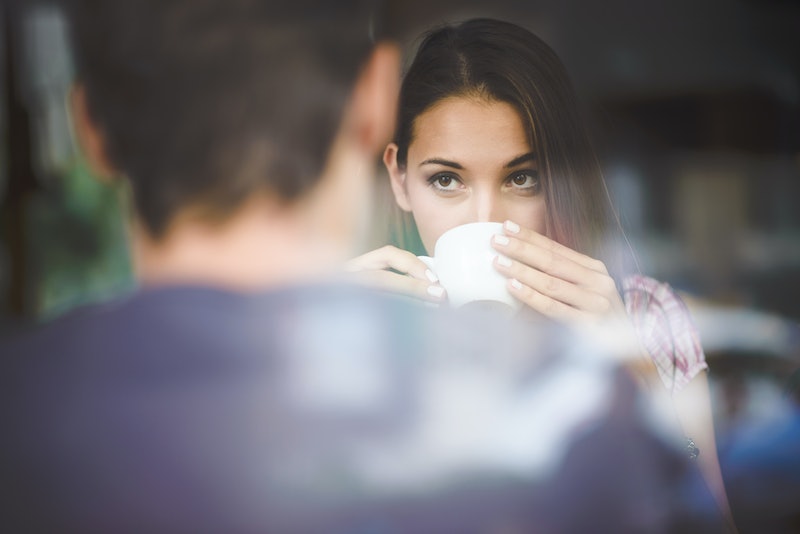 And if you're looking to settle down and do it quickly, meeting a serial monogamist may be your thing. But if you're looking to tip your toe in the dating pool, or hoping it to take it slow, you two are probably not going to be a great match. There's also a good chance you could end up hurting their feelings if they're looking for something serious and that's not what you're going for. But they might not always admit that's what they're going for, or even be aware that they're the type that gets into relationships quickly. So it's good to be able to gauge what the other person is looking for so you can make sure you're both on the same page about what you want.

So how do you spot a serial monogamist? Here are seven signs you can look for right on the first date:

First date and they're talking about a concert two months from now? Dead giveaway of a serial monogamist. Maybe you jump at the idea of someone who can commit and plan ahead, or maybe you want someone who want to cool things off and make sure they want to be with you specifically, not just the next person that comes along.

If it's anything more than "we should do this again sometime", it's probably a sign they're wanting to jump into something.

This may not come up on the first date (hopefully it won't, because it's awkward), but if it does it can be really telling. If they just got out of a relationship but already seem to be wanting something serious with you, be a little suspicious. If their whole history is long-term relationship to long term relationship with only weeks in between, they're almost certainly a serial monogamist.

We all may try to be a little flirty on the first date, but you don't want to see a certain type of doe eye. These are the most terrifying eyes. You know it when you see it. When someone is acting completely transfixed before they know a damn thing about you. Some of my friends say it's romantic (I say it's creepy as hell), but it's definitely one to look out for.

5. They Agree With Everything You Say

Especially if it means changing their answers. If they are going on about how much they love cats and then as soon as you admit you hate them they start to qualify, saying they really don't love them that much— then ding, ding, ding. While being a serial monogamist is fine, you don't want someone changing themselves on a first date (or ever). Probably time to cool things off a bit.

6. They're Ignoring Your Vibes

If you clearly aren't feeling it, but they're plowing on ahead, there's a good chance they're the kind of person who will try to make it work at any cost. If they can't pick up on the the friction between you, or just your apathy, they're only seeing what they want to see.

7. They Don't Mention Their Friends

Big. Red. Flag. Even if it's just a first date, if they don't mention friends at any point then it's a big sign, especially if it's combined with trying to make plans way in advance. This isn't to say that serial monogamists don't have friends, but it could potentially be a sign that they don't make time for their friends because they get wrapped up in relationships, which if you're looking to take things slow, is probably a red flag.

Want more of Bustle's Relationships coverage? Check out our video on what it's like to be a bridesmaid for hire below: